How can I "unidentify" an album

I am relatively new to roon… I have a problem with several albums where I cannot get some tracks aligned to show the number of performances properly.

As an example I use Led Zeppelin Presence which I own in an older CD version plus the 2015 remaster from HiRez flac download.

For the first one, all tracks are properly identified and the album shows pretty much complete with composers and other metadata. The download version however does only add composers to the additional tracks but not to the main album tracks. Although I entered the composers manually, the tracks are not aligning. If I could “unidentify” the album, it would work when adding the composers. As it is currently shown, the “go to composition” does not show up in the context menu.

I hope I explained my problem good enough. 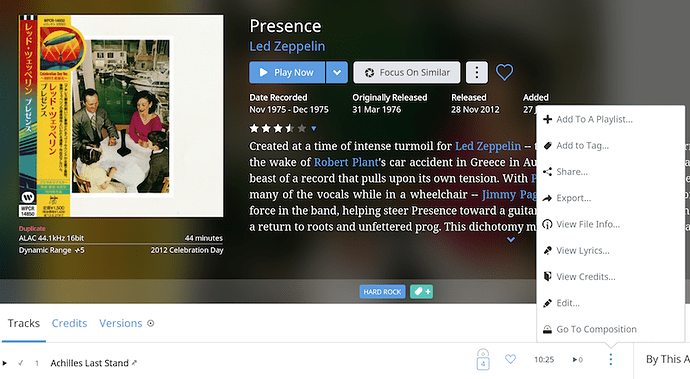 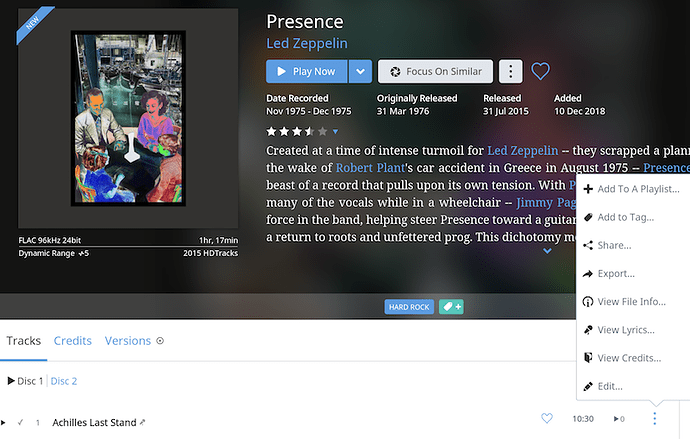 Can you use ‘Prefer File Data’ for that album.

Yes, but that does not change anything for the composer issue.

You can manually add them although this takes time.
You can re align tracks in edit

I don’t think I can help further on this.

But thank you anyway…

If I have understood your problem correctly, you unfortunately appear to have encountered a known Roon bug; an identified album which lacks composers on some but not all tracks will not allow you to edit compositions on those tracks. See A long thread here.

To force Roon to unidentify your album you can first edit, identify and then tell Roon none of these on both following pages. It should then use your own metadata, (but you won’t get the review). (I would have thought Prefer File Data would have sufficed though)

Thanks Brian, that was what I missed to get an unidentified state. Yes, missing the additional information, but I rather like to have the credits in order. Hope roon will get a fix on this which allows to make proper use of the composition editor in such cases.

Hope roon will get a fix on this

No, that does not solve it. It just tries to re-read from the files, but not open the connection to the composition.