How do I search for a composition?

So I’m reading an article that mentions “Beethoven’s late string quartet Opus 130” and I think I must search that out. 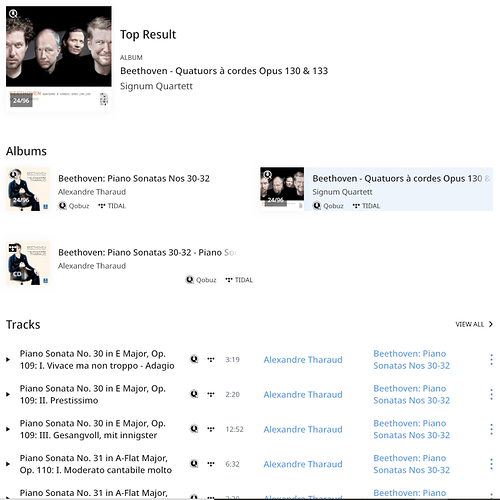 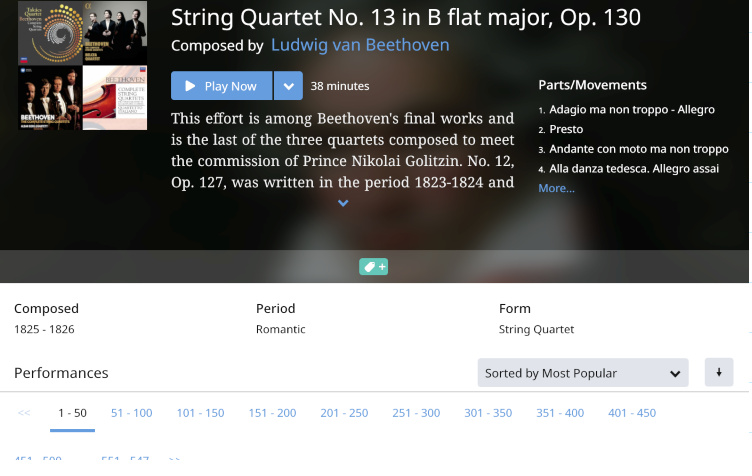 Am I dong something wrong that none of these showed up on the initial search?

Is there a special way to phrase a search top get a particular composition?

I don’t have a ‘works-always’ answer, but in your case I’d try with “Beethoven string quartet opus 130”… And yes, if you get at least one version of a composition, you can generally get from there to the versions available in your library and on the streaming service you use - Tidal or Qobuz. That’s how I generally look for alternative recorded versions of given compositions. But even this will fail when the available metadata prevents Roon from recognizing a given track or group of tracks as the composition you’re looking for.

One way to do this is to start the search in the Composition screen, then, using the funnel filters in the column heads, search first for Beethoven (under Composers), then Op 130 (under Compositions). That gave me both the albums in my library and those in Qobuz…

Thanks, that works well enough!

Hi. From experience in designing software application, I can confirm that Roon search capabilities are very limited. Roon should work on an advanced search module with the ability to see history of searches, search by multiple attributes, …
I hope that improves in V1.8.
Regards,
Imad

One way to do this is to start the search in the Composition screen, then, using the funnel filters in the column heads, search first for Beethoven (under Composers), then Op 130 (under Compositions). That gave me both the albums in my library and those in Qobuz…

Alas, I think that only works if you have an instance of that composition already in your library.

The search window in albums view can be useful, if you are careful with spelling.

I think the best that can be said charitably is that Roon search is a work in progress. It has certainly failed me so badly in the past that I almost gave up using it, preferring to do most of my searches in Qobuz. However, to be fair, the other day I used Roon to search for “Beethoven Quartets Smetana”, and it found the release of the Beethoven Quartets by the Smetana Quartet I was looking for. Not a straightforward search, because Beethoven and Smetana are both composers, and both wrote quartets. I was surprised! There’s hope yet! Looking forward to 1.8.

What you will find with most of those hundreds of matches ist that maybe 10-15% of those are genuine. All others being junk.

As has been said, plenty of room for improvement for version 1.8. I‘m not holding my breath…

What you will find with most of those hundreds of matches ist that maybe 10-15% of those are genuine. All others being junk.

Yes, that is one of the dementingly frustrating behaviours of Roon. They claim to know what a composition is, they indeed correctly show up a sequence of tracks as being a composition, lasting say 3 hours with 60 tracks in the case of an opera, yet they then give as instances of that opera a single aria lasting two minutes. Then they compound that by finding excerpts on trash CDs such us “Relaxing music to mow the lawn by”, and you get your 400 results. Or in the case of the Bach Matthew Passion, 1431 results. Try scrolling through that lot four at a time on an iPad screen. Hopeless.

Straight there ? It’s fine if you know the opus number, it may only work if you have it in your library , can’t do the control 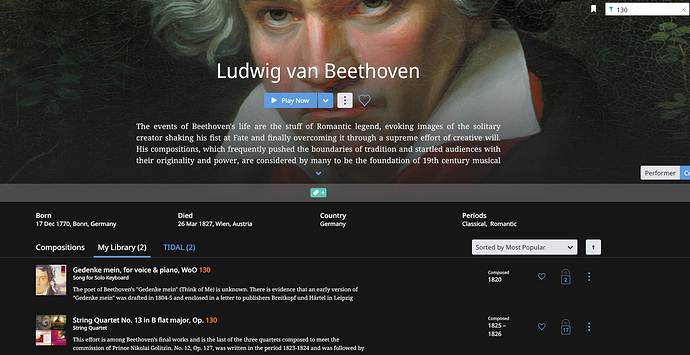 That only works if you already have it in your library.

Another failure of Roon evident in your example is that Beethoven has got Performer results. I would very much like to know how that is possible, since he died somewhat before the invention of recording.

If I do a search for “Beethoven String Quartet op 130” in Albums view, I get the desired composition as the top hit, not bad you might think, but then I get offered 529 possible versions from Qobuz, many of which are only tiny excerpts (unless of course the Lindsay Quartet really can play the whole work in 1:53). 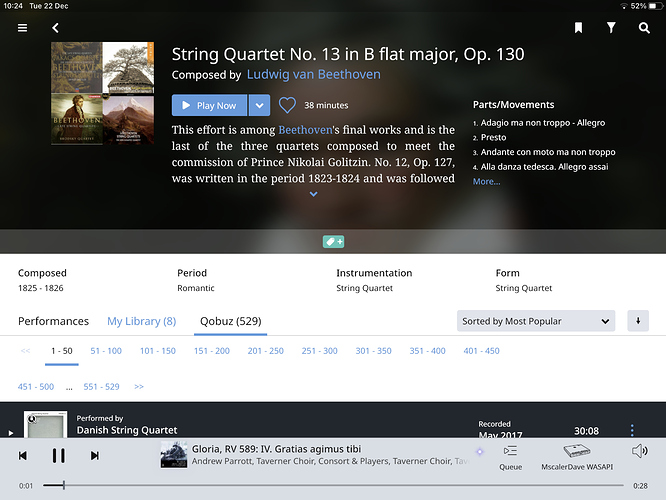 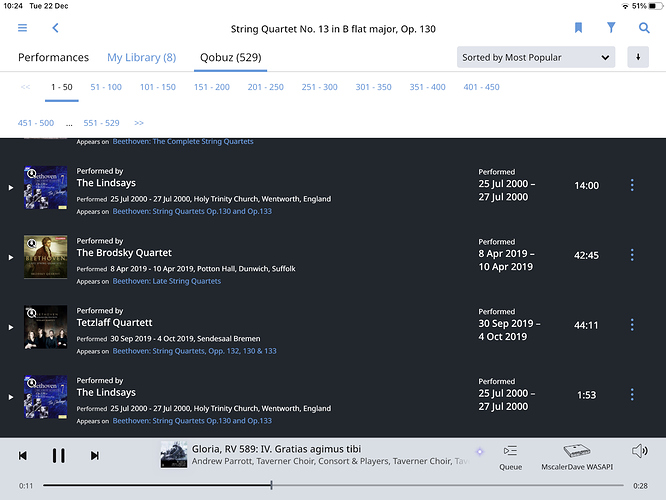 I’ve given up asking Roon to play whatever classical music I want; it can rarely find it. I find Roon works best when I agree to listen to whatever Roon wants. Otherwise I spend all my precious time battling with funnels & focuses…

If I want to search & be in control, I switch back to JRiver - but then I lose Qobuz.

I assume I’m doing it all wrong. I’ll stick with Roon mainly because of Ropieee.

Have you looked At mConnect, as a Control app, it supports DLNA, Tidal and Qobuz.

One snag is Gapless , I am perusing that st the moment. There is a free version to try

The bits and excerpts is a known issue down unfortunately to 3rd party metadata , until metadata improves ( if ever) Roon will always suffer as will we.

The performaner bit is again c**p metadata, how many albums have you got Beethoven as the artist ? It was an old way of somehow including the Composer where no Tag was defined. I am sure you must have come across this before.

Plenty I would guess, even DG still stick to that practice however ludicrous

how many albums have you got Beethoven as the artist ?

According to Roon using focus on Performer=Beethoven I have no albums with Beethoven as the artist.

Yet Roons composer page for Beethoven gives me the Performer option, and produces an album of Beethoven Sonatas performed by Paul Lewis. If I dig about in the metadata for that I find that Ludwig van Beethoven has been given a credit for the liner notes. Even if I accept that is rubbish metadata, I can’t accept that the author of liner notes is a performer. And even when I edit out the credit for the liner notes, Beethoven is still shown as responsible for the production of 7 albums which aren’t in my library, and has appearances on 3 albums which aren’t in my library.

This is not defensible.

I wrote software for a living. Had my software produced results like this I would have hung my head in shame, apologised, and taken to the mattresses until I had delivered a solution. Saying “it is a known problem” is not a solution. Using metadata as an excuse is not a solution.

Then Roon is unlikely ever to satisfy you …

To maintain the metadata for millions of albums is a job in its own right , it’s certainly not what Roon considers its primary role , it’s why Roon buys in its metadata source

Without being rude, take it or leave it

I have a similar problem; it is complex so I would break it down to the following:

I understand that [1] and [2] is a priori not an issue. Some times we have it maintained, sometime not.

But [3] is an issue in principle: some time ago I made the tacit (and wrong) assumption that Roon being a relational database would allow composite queries and I was quickly corrected (Roon uses a Google type dB which apparently has limited capability for complex queries).

I believe 1 & 2 are actually done. I cannot swear to it but I have around 4000 classical CD’s so I can hardly have checked all of them

If there is an issue it’s in fragmentation, eg in operas , a search pulls back an overture, an aria or the complete opera with the same weight.

The introduction of SECTION recently at least allows for Acts to bulked. Short of a differentiator like “opera complete” ‘opera excerpt” etc I can’t see what else can be done.

I suspect the metadata providers are as badly off as Roon. I recently saw a box set the didn’t even name the composer. It was another DG back catalogue reissue, only by going on their website and comparing the track list could I sort it.

Classical metadata is a mess, I manually groomed my 4000 album (more fool me?) adding Compositions and Movements I can only imagine what a job the metadata providers face. They presumably at the mercy of the record labels. Adding data like this I do not recommend it is painful even with a decent complement of tools.

Your point 3 has been raised before , many times, but Roon’s choice of db doesn’t lend itself to complex queries they tell us.

Using the range of tools an NOT using Search works for me , not that improvement couldn’t happen

Perfection is hard to achieve