How do you organize your Filing System?

I am using dbPoweramp to rip my fairly sizable CD collection. This is all fairly new to me and I am still getting to grips with tagging. My question is…how do you structure your music folder? For instance I have a liking for Miles davis and he has recorded under his own name, or that of his bands, Miles Davis Quartet, Miles davis Quintet etc…
Right now my system has all of these different “bands” as separate folders. But would it make more sense to have one Miles Davis folder and not worry about the “band”?
Currently I am using this string when I rip my files…
[IFCOMP]Various Artists[][IF!COMP][artist][]/[album][IFMULTI] ([disc_total]-CD-Set)[]/[IFMULTI]CD[][IFMULTI][disc][]/[track] [IFCOMP][artist] - [title][][IF!COMP][title][]
Many thanks for your help.
Aloha!

How I do it, and this predated Roon

Each alphabetical sub–folder has an artist folder and the albums are stored in the respective artist subfolder.

So far so good. That’s about what i have been doing.
I like the sub folder idea so I will start that.
So do you file an artist like Miles Davis under his basic name or by his band name?
And would you therefore name the Artist “Miles Davis” and the Album Artist “Miles Davis Quartet”?

I might show two artist subfolders if it applies…for example, Alan Parsons, and Alan Parsons Project. You can arrange your filing system to suit your needs.

Then, within those folders, I have artist folders. So the paths to tracks look like this:

The only reason I have lossy separate from lossless is the lossy files are from iTunes. Most of them are singles or a few tracks from albums. I have them separate to remind to look at them every once in a while so I can see if I like any of those tracks enough to buy the albums they are from. That format could be CD, SACD, DSD downloads, or PCM downloads.

Classical is stored by director or artist and then broken down further by composer.

All in all very simple. Roon does not require even this simple level of organization. But I still maintain it to make managing the music easy.

This whole discussion is why folder-based browsing doesn’t work. And tags. And there was a discussion by the streaming services about the impossibility of this structure.

The problem is that ever since Unix in the 60s, we have had the idea that the file system, and any data structure of any kind, has to form a tree. That is, everything has to have a single parent. Here we call it “Album Artist”.

It isn’t just about Miles and his various bands, that’s easy to solve because Miles is the leader.

But what about the album “Trane & Bags”? Do you file it under John Coltrane or Milt Jackson (whose nickname was Bags)? Some people have dismissed this, “of course I would file it under Coltrane” because he is a more important artist than Jackson. Well, maybe. But I got The Triangle and filed it under Arild Andersen whom I knew, but eventually I came to love Vassilis Tsabrapolous more and wished I had filed it differently. And how do you file performances with Hélène Grimaud and Claudio Abbado, given that they famously broke up in 2011 over artistic differences after working together for 20 years?

Roon does not require that you choose one “owner”. You can find these albums under Coltrane or Jackson (or “Trane” or “Bags”), or under Andersen or Tsabrapolous, or under Grimaud or Abbado.

So to go back to the original question: I don’t care where the ripping software puts the album, because Roon will let me find it regardless.

What happens when Roon dies and we have to move on? @brian put it very well: “I don’t imagine I will use any system that is stupider than Roon”. 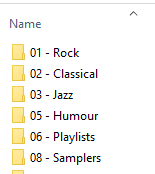 Then Alphabetic folders A … Z

For Non Classical its then a Folder per Artist and Albums within that folder normally dates eg. 1969 - Abbey Road so that they are order by release

For Classical I have the same A… Z then a folder by Composer , for the bigger ones I Split by Genre 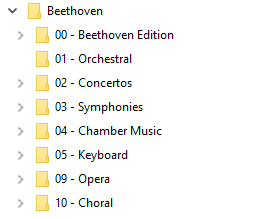 Then Albums in these folders

There are 2 catchalls , Multiple Composers and Collections (for big box sets)

Quite comprehensive and really unnecessary when you are using any cataloging software like Roon, it just wasn’t worth changing and suits my logical (?) mind

I’m with Anders on this - keep it simple and let Roon do its stuff. Roon likes a folder best when it holds the collection of tracks that go to comprise an album. So I just have a very simple naming rule in dBpoweramp:

No conditional logic necessary or needed. 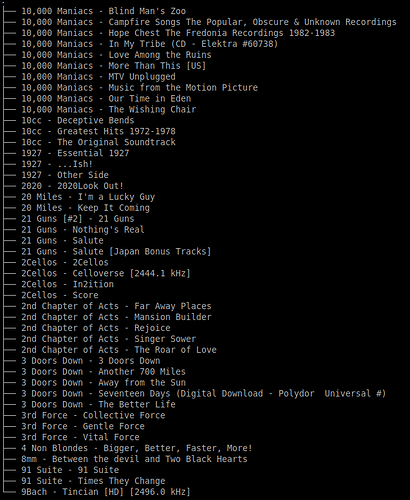 In a perfect world I’d agree but we live in an imperfect world. You don’t care what your ripper calls it or where it puts it - what happens when you want to take a band’s discography and stick it on a DAP or mobile for listening when on the road? What do you you when Roon’s data is crap or incomplete - go fix it in Roon’s walled garden?

I put mine in artist/album but only due to inheritance.
I do see if the metadata is “good enough” and as I listen to mostly mainstream artists it usually is for my needs.
I use soundiiz to offline roon playlists by turning them into Tidal so I don’t need to find physical files.
A lot of the chatter on roon is from the metadata obsessives, I’m not convinced they are the majority. The trend being for streaming only users who by their nature are more used to the ephemeral and search rather than structure.

The trend being for streaming only users

Who could just as well be using Tidal or Qobuz to do their bidding rather than Roon seeing as they don’t care about being able to discover anything about the music and artists they enjoy.

The better Roon gets at providing complete and accurate metadata the mess the obsessives will chatter about needed improvements. He’ll, they might even begin a cable debate

Why does someone only using Tidal or Qobuz mean that they don’t care? Surely them using roon shows they do? You can still use roon to discover streaming stuff just as well as local files.
Roon will never provide complete and accurate metadata, no service that wants to stay in business will ever do so.
They may get better but they will, probably, get better only in the mainstream as that serves more user base.
The user base obsessing over the credit for the guy who did the cigar smoking noises on Bob “Wheezy” Johnstone’s sole 1935 recording of The Cigar Blues is, thankfully, vanishingly small.

They may get better but they will, probably, get better only in the mainstream as that serves more user base.

And that’s exactly where the improvement is required.

The user base obsessing over the credit for the guy who did the cigar smoking noises on Bob “Wheezy” Johnstone’s sole 1935 recording of The Cigar Blues is, thankfully, vanishingly small.

Must be, I’ve never come across anyone obsessing that level of minutia. 1.7 has done a bloody good job at improving composer and performer metadata and linking performances that were previously unrelated within Roon. It’s not perfect, but it’s easily a 95% improvement in what we had in 1.5 and earlier.

In any event not sure how metadata figures in a how do you file your music thread.

Ya, I’m sure we all get that, but as I said, the data isn’t perfect and as Roon isn’t the swiss knife of audio getting to the music to transcode, copy etc. for other purposes isn’t viable via Roon.

BTW, have you ever seen a sharepoint integration truly create a world where folders aren’t needed and everything doesn’t ultimately just morph into a chaotic mess?

I hate sharepoint, it’s an abyss to lose “stuff” in.

Sort of agree… I do believe in tags, though. Tags are our salvation from the tyranny of hierarchy.

I put each album in a folder at the top level, named {artist or artists}__{album name}. If there are multiple releases of the same album, I add something to the end of the album name to discriminate them. This string is my UUID for the album.

I’d suggest sorting albums by bass players.
A-Z - Bass player - Album title
This keeps you young, as you have to remember the bass player of each album

You don’t care what your ripper calls it or where it puts it - what happens when you want to take a band’s discography and stick it on a DAP or mobile for listening when on the road?

I would probably use Roon’s export facility to export the selection to a DAP or smartphone?