How I revised a long-held belief

In the 80s, I became convinced that the front and back ends of the chain were the most difficult to get right, and therefore the most important to focus on and invest in: the transducers that convert between mechanical and electrical energy, the cartridge (and its supporting arm and turntable) at the input end, and the speakers (and their interaction with the room) at the output end. And consequently, I felt that the all-electronic chain in-between (pre-pre-amp, pre-amp, amp…) was under control; I would not argue that all amps sound the same, but I felt that any competently engineered electronics box was close enough to perfection that it wasn’t worth worrying about.

I have held on to this belief: I don’t do vinyl anymore, but as we often say in these pages, the speakers and room (and DSP room correction) are the second most important component. (The most important is the music, and hence Roon which helps me discover and explore and traverse the music and musicians.)

I didn’t pay much attention to amps. Unless they were underpowered or just bad, they were not a worry.

Today it seems as if people here and elsewhere consider the digital chain the most critical. There is an enormous amount of attention paid to DACs and their technology, and to the stuff around them, formats and streaming and jitter and clocks and cables and switches and their power supplies. This is a little weird: digital technology is certainly more robust than analog, much less sensitive to disturbances. Maybe people think of the DAC as a transducer, sort of, like a vinyl cartridge, converting between one form of information and another, and hence difficult. Maybe people think this is still an immature technology (but it’s been 30years!). Maybe it’s just cool. Maybe the interest is self-reinforcing, with all the talk in media and all the new tech like audiophile USB cables, LPS for network switches, femto clocks sprinkled all over the place. I have shared in these views, but I do so less and less: as before with amps, I feel the industry knows how to build a competent DAC and much of the ancillary stuff has minimal effect.

But a few observations conspired to make me question the belief in amps as being mature. I listen to headphones a lot, and I had noticed that many DACs included a headphone amp that they didn’t pay any attention to, that they didn’t charge appreciably for, and that as we might expect sounded like crap. This was especially true at the lower end: it is difficult to buy a cheap DAC without a headphone jack. (At higher prices, pure DACs are more common, perversely.) I have owned several of these devices, and gotten rid of them. And conversely, I have owned single-purpose, analog headphone amps that were much better.

And then came the breakthrough: a friend recommended the THX AAA 789 headphone amp (technology invented by THX, box sold by Massdrop). I have written about it Really low cost headphone endpoint : it is stunningly good, and it cost $350. This shook me: the part that I have considered mature and competent was suddenly revolutionized. I use that word advisedly: the 789 is not just good, it’s revolutionary.

But I wanted to go further. Turns out Benchmark has licensed a more advanced version of the THX technology, added some nice stuff of their own like a relay-based volume control, and sell the HPA4 headphone amp. It plays well with the “B” version of the DAC3 which does not include the lesser headphone amp and volume control: they use professional level balanced connection at 16 dB higher than unbalanced consumer stuff, improving SNR. (Several white papers at the web site.) The combo costs $3,700, 10X more than the 789 but a lot less than a Chord DAVE.

I use Audeze LCD-4z cans. The combination is fascinating.

And it’s interesting: the Benchmark DAC is certainly well engineered and well respected, but it’s based on a common ESS chip and not even the top of the line. It doesn’t use custom code in an FPGA like Chord’s and PSAudio’s stuff, it doesn’t brag of a million taps. It fits in my old view of a competently engineered box, but not necessarily earth-shaking. The key thing is, I let the choice of headphone amp guide the choice of DAC, instead of the other way around. Listening to the rig right now, I feel this was a reasonable choice.

With four components — the DAC3B and the HPA4 Benchamrks, and the 789 and the DU-8 — I could of course do a comparison of combinations. And I could introduce Chord and Meridian DACs, and the Bryston headphone amp. But I’m not a reviewer, look elsewhere.

This post is not about reviewing devices. It’s about new technology revising a long held belief.

I think it’s good when we are flexible and open to reviewing old beliefs. 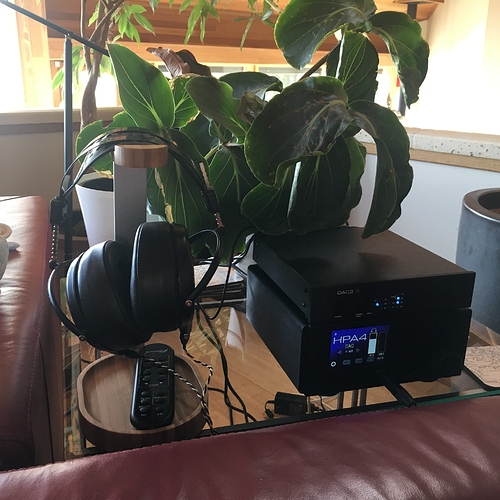 For me, high fidelity audio is bit like cooking a fine dish. It is possible to ruin it at any stage. Less than superb ingredients, poor storage, bad recipe, under or over cooking, inappropriate seasoning. Maintaining the required quality throughout can require obsession. Periodically there are calls for simpler, fresher dishes, mainly because it is easier to keep the required high standards when there is less intervention.

As with food, so much of our experience is with average audio. We hear it in public and over the radio or TV. We recognise it for what it is, but we never perceive average audio as being “the real thing”. It is not until someone goes to the trouble to take care throughout the whole process that our senses get beguiled into perceiving recorded audio as the real thing.

But like anything in the real world the audio chain is built of compromises. Where is our money best spent ? This is a very different question from where are we usually invited to spend our money.

I haven’t spent much at all on treating my room. But I believe that is probably the best bang for buck we can make. Headphones would seem to be room treatment taken to the logical limit !

Amplification has been a fertile source of argument for audiophiles since we first banged rocks together. The mythical “straight wire with gain” doesn’t exist and never will. I prefer compromises that keep as much of the sense of the music as possible and don’t introduce unmusical harmonic distortion. So tube amps for me.

Aha, tube amps. They relate to another long-held belief that I’m not yet dropping.

I believe what we are doing is engineering, not mysticism. I believe measurements give good guidance. Not saying that measurements tell the whole story, once we see a device is well built there is room for human evaluation. But a device that measures badly — I don’t buy that it can sound great “because we don’t know what to measure.” What I’m saying is, I don’t buy the love affair with tube gear, especially single-ended triode amps. The people who measure these things basically describe them as “broken”.

I recently read the book The Birth of Loud about Leo Fender and Les Paul inventing the solid body guitar, and in that era they also created tube amps, the iconic Marshall stack, and the tubes participated in creating the sound. The tube amps were an instrument. But my amps should not be instruments, they should neutrally reproduce the sound coming in.

But as I have discussed above, in my new world view the headphone amp matters a lot. And many have spoken about tube amps. And those tube amps look sooo cool. The Woo Audio WA5 LE consists of two devices, six tubes of which four are enormous, and it weighs 70 pounds. I don’t buy that it would sound good, but my fingers are itching. So is the wallet. A strong urge to buy a cool but obsolete device. What to do?

But this belief in engineering is a long-held conviction that I do not want to give up.

I do have the AAA 789, left over after I got the Benchmark. Tiny box. I could hide it behind the tube amp, arrange the wiring appropriately, and bathe in the orange glow of the tubes while enjoying the sound of the 789…

I think it’s good when we are flexible and open to reviewing old beliefs.

Congrats on the HPA4 addition. Very nice head-fi setup there.

Or get the audiophile version

At least the 5’s are not upside-down 2’s but they have a kickstarter to fix that … but looks like c costs are going up a lot.