How much SSD capacity is required for independent ROCK server including the database?

I have a synology 8-bay nas, the music files are about 18T (35000 CD), now I would like to use an additional NUC computer as the roon rock server, considering 35000 CD Database and roon server, how large capacity SSD hard disk is needed, 128G is enough？

The original spec for ROCK was a 64GB SSD, so 128GB will be more than enough.

Here is a thread about large libraries (including advice about hardware):

I bought the latest i7 nuc with 16 gig ram and 120 gig m2 ssd. Installation was flawless. Connection of Rock to my various Nas was without problems. All went well. The scanning process of my var NAS was the point where the problems started. My Database is extensive. Over 500k tracks. Rock came up with a total of 340 k tracks after the first scan. Various scans later the max reached was some 390k recognized tracks compared to the Win 10 pro i7 6700 installation, which gives the exact numbe…

As your asking for configuration advice for ROCK, I move the discussion over to the #roon:rock section of the forum as it is more likely that you will get a qualified answer there.

35000 ripped CD’s will create a db size somewhere between 50gb and 60gb based on my experience with my own library.

If a streaming service is used, tracks added from Tidal/Qobuz also add the same amount of data as local/ripped files – they are not different when it comes to store data in Roon’s db. So the SSD contains the OS (incl. Roon Server software package) + the database – AFAIK you should have the amount of db-size free to be able to restore a backup should you ever want/need to (and maybe also OS/Roon Server space free for updates? Whatever is bigger.).

Seems like a 256GB SSD is the safe bet for large libraries.

I don’t think Tidal/Qobuz albums have the waveform or ‘dynamic range’ calculation that ripped CD’s have, so similar but probably not the same?
I agree on the 256gb ssd, mainly because the faster ssd’s are the newest and they tend to be in the bigger sizes.

I don’t know more than what Brian wrote: 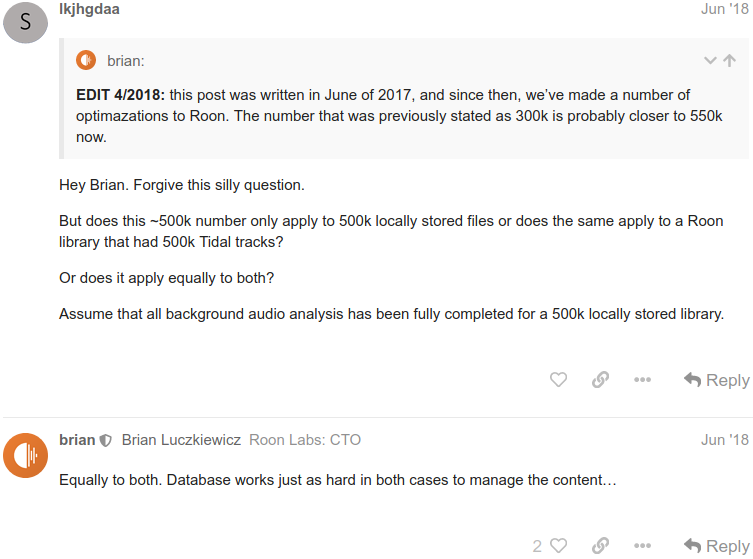