How to find albums NOT in my library

In the discography there is a button to filter what is in my library.
Is there a way to find what is not in my library, I.e. albums I have missed for an artist?
It used to show by white or black background.

Using Focus you could pick Qobuz or Tidal via the Storage Locations column, or pick your library and then click it again to Negate it, Red in the picture, now shows everything not in your library:

The albums have marks:

The first one is shown as part of my library, sourced from Tidal.

The second one is from Tidal, not in my library.

The third one is favored, sourced from Tidal and in my library.

No.
This is what I pointed out in my last sentence: “My Library” does not mean “Local files”. My library of 5,141 albums has 1,683 on my local disk, the rest are Tidal or Qobuz and I have clicked Add To Library.
So asking about “not in my library” has nothing to do with Storage Loocation (or Source, which look like they mean the same but do not).

Look at the Bruce Springsteen discography: 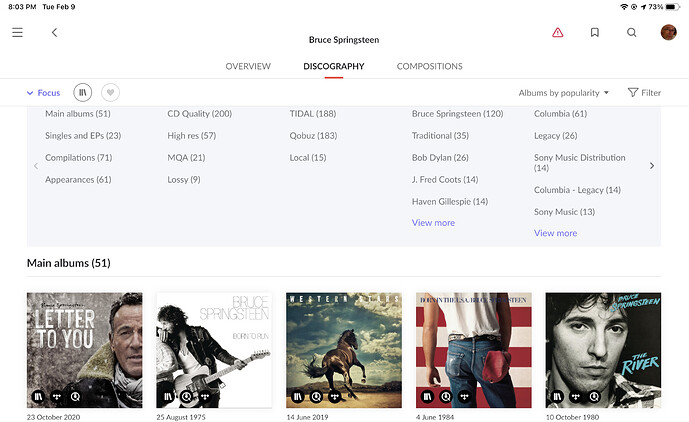 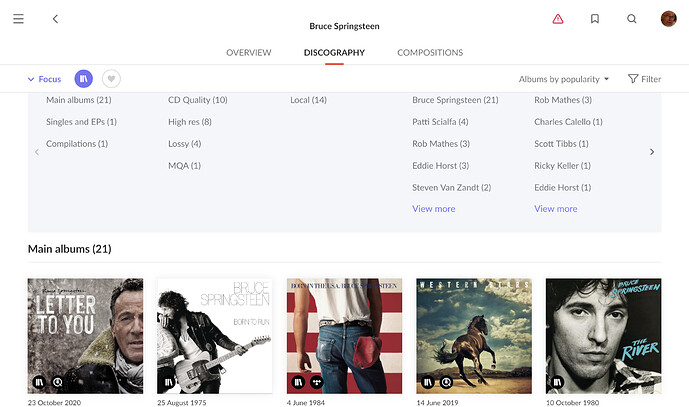 image2388×1411 435 KB
It says My Library contains 21 albums, which is from 14 local files and nothing else, but that is incorrect: the very first album, Letter To You, shows it’s in My Library and from Qobuz.

So it isn’t just the users that are confused, the code is too.
@support This looks like a bug, first confusion between My Library and Local, and second just math errors.

Yes, I know how to recognize an album that I look at.
But Tidal has 188 Springsteen albums, and if I am a completist collector and have 175 albums, it would be tedious to wade through 188 to find the 8 that I have missed.
Focus is about finding things out of the vast universe.

You are so right, I tried and its impossible to do what you are asking, seems an easy solution would be to allow the “In Your Library” button to Negate the display, bummer