How to merge multiple CD's in Roon into original single album

One CD becomes 10 in Roon due to different featured artists on different tracks.

How to merge into a single CD in Roon? Tried both Edit Album and Edit Tracks to no avail. Need a step by step approach here, please.

Have you checked the merge feature; not sure if this helps you thru:

I think this should help further:

Thank you again. I’ve got everything back into track form. I’ve unfortunately converted a two disc set into a single disc and get a warning when I use Edit Track Grouping. Specifically,

All tracks are located in /storage/music/cd-quality/
WARNING: THIS ALBUM HAS MORE THAN ONE TRACK WITH THE SAME DISC AND TRACK NUMBERS

This process is much harder than with Apple Music, which imported/archived the discs perfectly. Problem is, my Innuos Zenith SE server doesn’t use Apple Music. The methods for correcting such mischief in Roon are not at all clear and undocumented with specific examples.

Spent several hours trying to stitch these together in Roon to no avail. I’m not even convinced that what I’m trying to do is possible in Roon. Certainly nothing demonstrating how this is done as in You Tube or something like it. Anyone from Roon listening?

I agree this particular feature of Roon is not too intuitive to use.

But it works, I believe.

After you merge the 10 cds into one you got a multidisc set. What follows, is an example how I would have done it (with a two disc set).

Afterwards I got a single disc (unidentified) album with all tracks. I believe another way to look at this would be by examining the tags in your files. Or Roons metadata is somehow borked, but this is hard to tell without screenshots from your album / tracks.

There is probably something in your files’ tag information which is causing the issue. I found the album on Tidal and you’ll notice Roon has the correct tracks and discs. 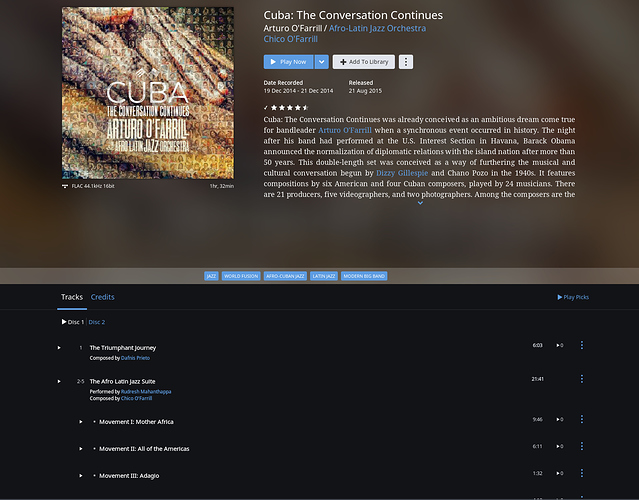 Take a look at your ALBUM, ALBUMARTIST, and ARTIST Tags for these files (maybe post a screen pic of an example you find); that might help figure out what is going on.

It happens frequently whit Tidal-albums also. Have several albums (classical) where I have to merge and edit to get the correct result.

Thank you so much for taking the time to show me. I got things to work for the Masters of the Keyboard 2 disc set. For the most part Roon has been a great resource.Software for handling metadata must be remarkably complex. I have a boxed set of Debussy’s works and the metadata was all over the place. Appeared to have been entered by different people with different data entry approaches. Roon handled these remarkably well, which was astonishing.