How to tell Roon to re-scan a local album?

My local album “Haydn, Joseph/Haydn Symphonies 93 & 101” looks in Roon like this: 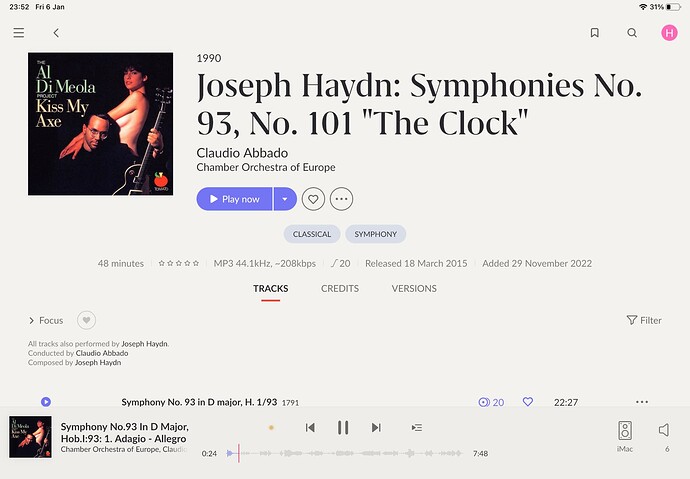 I found out the reason is that one local file in the album had the wrong album art. (The others had none.) Now I have removed the album art from that file, but Roon still shows the wrong image. - How can I tell Roon to re-scan this local album?

Select the 3 dots menu dropdown, Album Options and then Edit. Scroll down to Rescan Album option.

However, this may not fix the issue. If you want to edit the album art, select the Edit Album option at the top of the Album Editor window and scroll down to the Album Artwork section. If the correct album artwork is not available for selection you can add it into the album folder (as folder.jpg) then select it from there.

Remove the album from the “Watched folder” , Goto Settings>Library>Library Maintenance > Clean up Library - This will remove all references to the previous import

Make sure the album has the desired artwork as folder.jpg , then add back to the watched folder , this will force a clean rescan and use the folder , You may have to manually select the folder afterwards depending on what Roon decides

For info Roon is quite ‘enthusiastic’ about cover art. Any file you put in the album folder called front or cover (or variations on such) will be loaded as the album art. I’m forever renaming .jpg files so it takes the art I want.

I am not sure about “front”, “back”, “cover” as specific names , have you found anything in the KB to ay that . I would be interested to read that.

My understanding was that Roon honoured “folder” as THE Album Art and imported any further jpeg, png as Images shown on the album view , plus of course PDF documents.

As soon as Roon ID’s an Album it will add its “best fit” album art , depending of course how your import settings are defined

Thanks for the details, @Anthony_B .

However, this may not fix the issue.

Indeed, it didn’t do so for me. (The Album art seems to be cached somehow.)

If you want to edit the album art, select the Edit Album option at the top of the Album Editor window and scroll down to the Album Artwork section.

I did exactly that and I could select the correct album art. Easy!