How to use Dropbox?

In what way can I use the Dropbox function? What benefits does this function offer?
How does it work?

In what way can I use the Dropbox function? What benefits does this function offer?

I just set a regular back up to Dropbox and my back up disc. Better safe than sorry.

Keep in mind the initial backup to Dropbox can be lengthy.

Just the Data Base, not the library

How big is this likely to be?

I think this is a great feature, but I was a little surprised at the size of the backup. According to Roon my library contains 2252 albums / 28191 tracks, and after the initial backup, the backup folder is 2.6 GB. (On disk, the entire library is about 2.6 TB.)

I have no basis for comparison, so I don’t know if this is a typical size for the database backup.

I have around 41,000 tracks and a database folder that is 16 GB. According to the mac OS finder, the folder has 55,574 items in it. I recognize that this is not the tracks themselves, nor would there be any reason that this number would correspond to the number of tracks in my library, I’m just putting it out there for comparison’s sake.

@support I started using the DropBox backup feature a couple weeks ago, but this is the first time I bothered looking at the backup files. To my eyes, they look really strange. It’s just hundreds of files with random letters and numbers in the file titles. I think I’ve read elsewhere in the forum about this being a symptom of a faulty backup, but I’m not sure what to think. 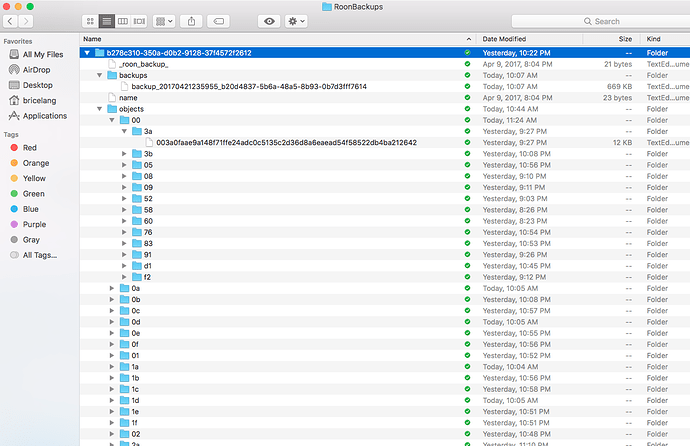 Can you please confirm or deny that this is what the backup files should look like? If this is bad new bears, I’m not sure what the cause is. Roon’s guidance on setting up backups advises AGAINST using Time Machine, but I’m not clear on that. Do you mean, I can’t use Time Machine in any way? I do use Time Machine to manually backup my whole MacBook Pro to a 1TB Western Digital USB drive when that drive is connected periodically, but I haven’t done anything specific to tell Time Machine about Roon or DropBox. I’m willing to redo my computer backup and Roon database backup if you show me a better way. I’m sure my whole music library and all other computer files would fit on the 1TB hard drive.

The backup is looking fine – these are the bare bones of Roon’s database structure you’re looking at.

Great! Thanks for the quick confirmation. I’m a noob when it comes to any type of backup. I don’t know TimeMachine very well so I don’t know how to tell it to exclude something like the Roon Database. The simplest solution for me right now is to just not have Roon open and running when I do my manual Time Machine backups to the USB drive. Simple enough.

In the future, if I get myself a NUC running ROCK, then that will backup to dropbox or a separate hard drive and I won’t have to deal with the potential complication of Time Machine which will not be running on that device.

started using the DropBox backup feature a couple weeks ago, but this is the first time I bothered looking at the backup files. To my eyes, they look really strange. It’s just hundreds of files with random letters and numbers in the file titles. I think I’ve read elsewhere in the forum about this being a symptom of a faulty backup, but I’m not sure what to think.

(The following all comes down to “What @RBM said.” He just types faster than I do.)

I use Dropbox for one set of Roon database backups, and that’s the way my “objects” subdirectory looks, too. (It looks the same in my non-Dropbox backup as well.) I recently did a major reconfiguration of the Mac mini I use as my Roon server — I did a non-scheduled Roon backup right before I started messing around, then restored from the backup when I was done, and everything went smooth as silk.

I think the best way to confirm that your backups are okay is to go to Settings > Backups > Scheduled Backups and see what it says there about your last successful backup(s).

You can certainly use Time Machine for backups, but you might as well exclude your Roon database folder, because a Time Machine backup of that folder likely won’t be any good if it took place while Roon was running.

I exclude my Roon database from Time Machine as well. If it can’t be used to restore function in the event of a problem, why use the disk space? And, including it makes for large, relatively time consuming Time Machine backups. You can exclude anything you’d like from Time Machine by clicking on the Apple menu in the upper left hand corner of your screen and choosing System Preferences. Choose ‘Time Machine’ from that screen: 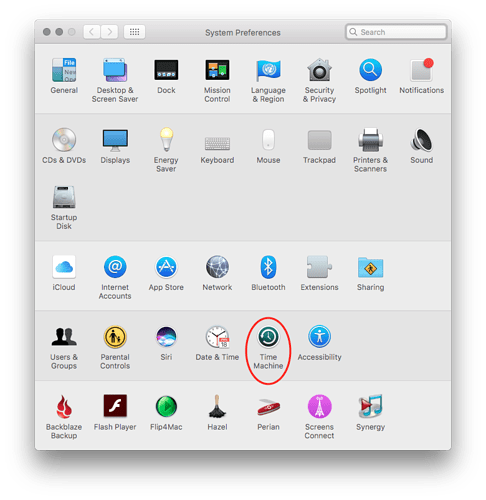 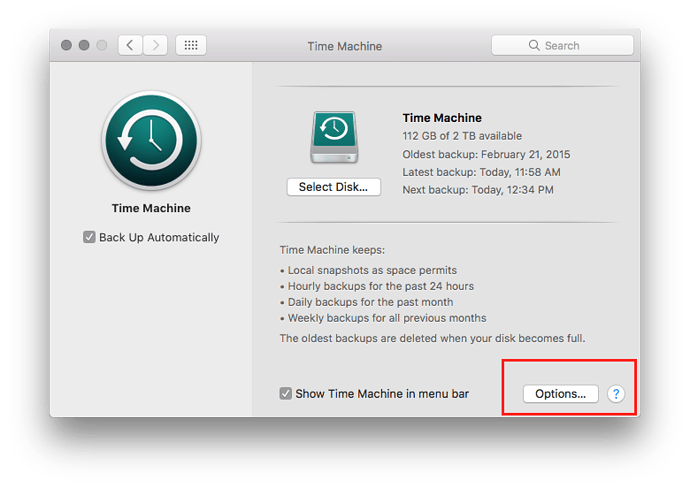 Click on the ‘+’ and navigate to your Roon folder. If you’re not sure where that is, read this. 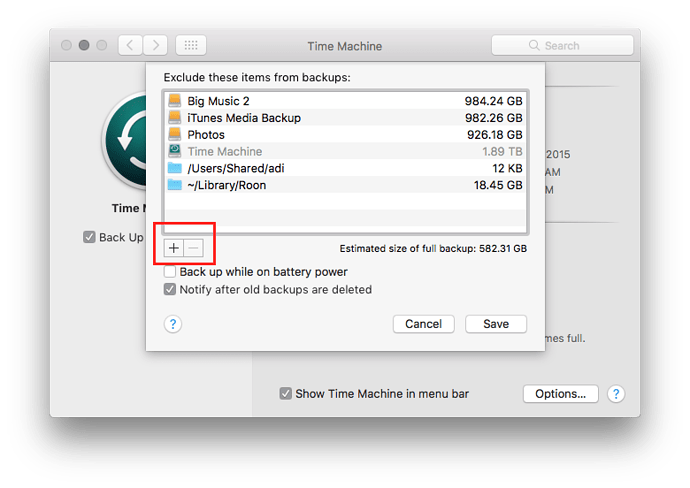 Thank you for taking time out to do this, much appreciated.

Happy to help. I don’t often have the answers related to Roon, but I do know my way around a Mac!

This article does not explain why Roon would want to log in to Dropbox, as far as I can tell. It specifically says not to back up to dropbox directly… So what is the point of the Dropbox login?

as far as I can tell. It specifically says not to back up to dropbox directly

That is incorrect. It says not to restore from Dropbox directly due to the time involved, but, rather download the backup to another location for use in a restore.

We do not recommend restoring a backup directly from Dropbox . The Dropbox API has some limitations in speed which can cause this process to take a very long time, and so it is best to download the backup from Dropbox to a USB drive

I assume Dropbox was added as an easy way for a user to make a database backup that is “off site”. Of course there are other ways of doing so, but that involves an additional computer in the case of a ROCK or Nucleus.

Ok, I see what you’re saying. I don’t use Dropbox in that way, so I was confused. Everything in Dropbox is on a local drive, so restoring from the cloud would make no sense for me. Thanks for clearing it up. I didn’t consider the possibility of accessing dropbox from a machine that has no/limited local mirroring.

It is basically a file depository. You can obviously share data from there. and then input to your library from box.