How to use the new Roon 1.3 DSP Engine? [resolved]

I was able to download 1.3 for my Mac music server and the app for the iPad from the Apple App Store. Seems to be working well, but in poking around the DSP engine shows as enabled, but I am unable to enable any of the options in the DSP Engine (e.g. Parametric EQ). Are there instructions on how to use the new features somewhere?

Here is the KB article on the DSP engine in general: https://kb.roonlabs.com/DSP_Engine

Let me know if you have any questions this doesn’t answer or if there’s anything unclear.

Where are you even seeing the DSP engine? My core and ios are updated, but I’m not finding the DSP features.

@scirica – I’ve moved your message to the appropriate topic, which has an answer 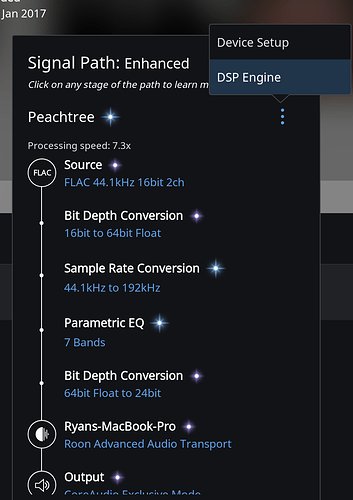 you can also long press on zone picker, or go to zone picker and select the 3 dots menu thing, or you can hit cmd-/ on your mac, or control-/ on your windows pc

I had already found the options okay, but I can’t actually change the EQ or any of the other options to enabled. The KB article didn’t answer my question. In my case I’m using the Ayre USB interface to a Mac music server. Signal path indicates bit perfect. Is there some other option elsewhere that i have to enable or set differently?

When you flip the switches, are they not going to the enabled state? Or are the switches on, but you don’t see the items in Signal Path?

DSP Engine says enabled, but the EQ and others won’t switch to the enabled state.

That’s really strange. I almost can’t imagine how that would happen. You’re clicking the blue dot on the little switch graphic to turn it on, right?

Yes, I was. Mysteriously after repeated tries again, it worked finally. Didn’t do anything different than what I’d done before, but now it’s letting me play with the settings, with noticeable differences in sound!