@support, can anything be done abut these duplicates? They are everywhere. 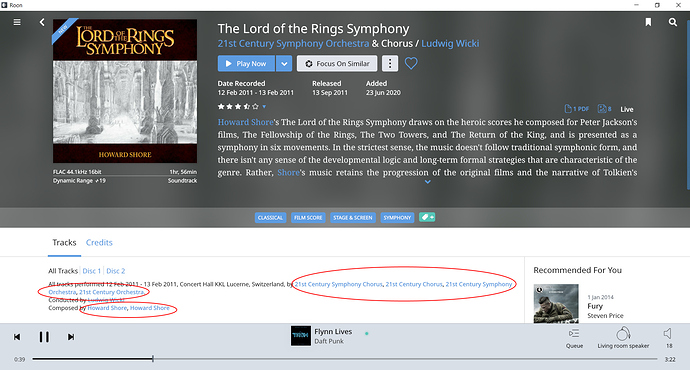 Roon may have an eventual metadata fix from their provider BUT in the meantime you can select all tracks, Edit button will appear in upper right, press it and then select Edit Tracks, use the Credits Remove option to remove those artists from roles you don’t want or need. They must have multiple roles that qualify them for showing up on the screen.

Roon may have an eventual metadata fix from their provider

David, thanks. I know how to fix it. I’ve had a lot of practice. BTW, deleting unwanted credits is certainly one way to go. What I generally do though is ‘merge’ the duplicate artists so it doesn’t keep on happening.

But I would rather be doing nothing at all. It looks like an ‘equivalents’ issue to me. Roon had actually improved that a lot, a while back but it just seems to have crept back in recent releases. I am seeing a marked increase in duplicates. One possibility is the way in which roon processes artist ‘equivalents’ where there are multiple overlapping metadata supplier streams being used. Roon would have to fix that, not the metadata suppliers as there are no standards. Maybe roon can comment? There are enough posts on this now that there must be a pattern

Thanks for the report, @tripleCrotchet. I’ve passed this along to the team to investigate how we can handle this better in the future.