Is there a way to set up HQ Player with Roon Server? So far I haven’t managed.

Have you reviewed the FAQ? https://kb.roonlabs.com/HQPlayer_Setup

I have a Pinkfaun streamer running Audiolinux with Roon & HQPlayer installed. 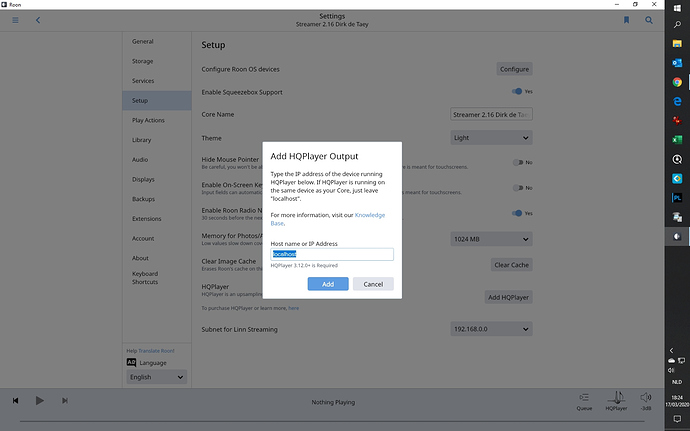 Then you can setup the Device 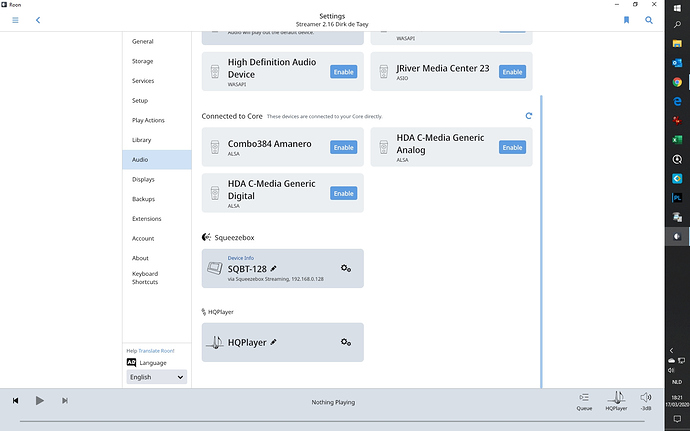 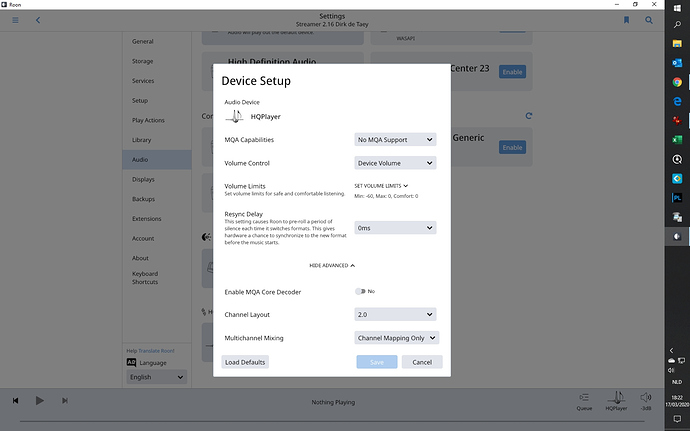 Last but not least, do not forget to select HQPlayer as your Audiozone 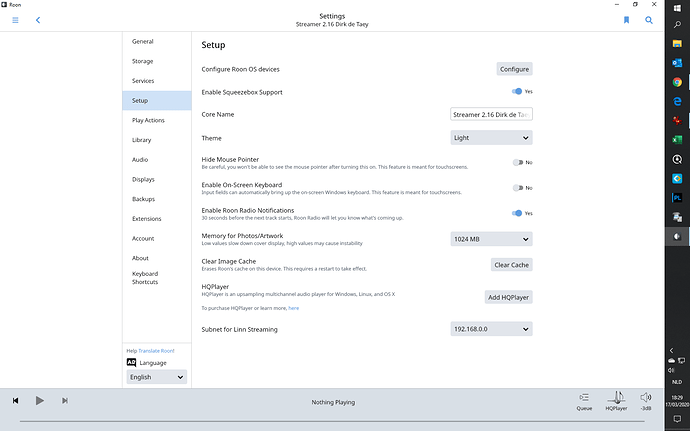 You also need to configure your DAC (interface) in HQplayer. (In my case yo will see the name of the USB interface, as I am using a not-official Linux driver for my T+A 8 DSD dac). 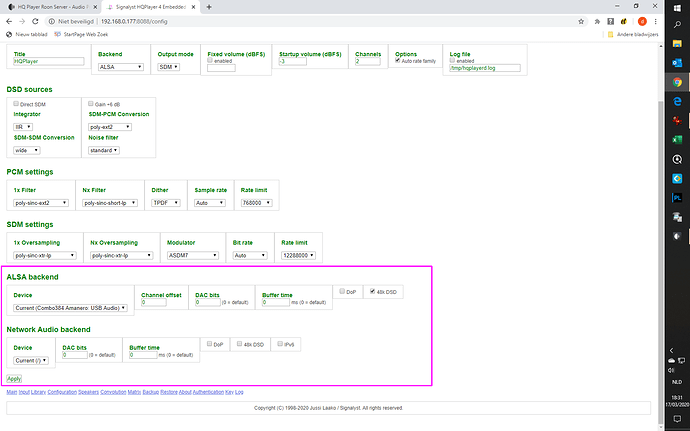 Hope this helps you in the right direction

Thanks, Dirk, for your help!

I had HQPlayer set to ‘localhost’, set the HQPlayer Device, and had it set as an audio zone (see attached screen shots).

I am unable set the DAC interface. I see you have HQPlayer Embedded. Do you need this rather than HQPlayer Desktop to set the DAC parameters?

Now that I am certain to have most of the parameters set properly, I try to run it on Roon Server (runs in the background!). 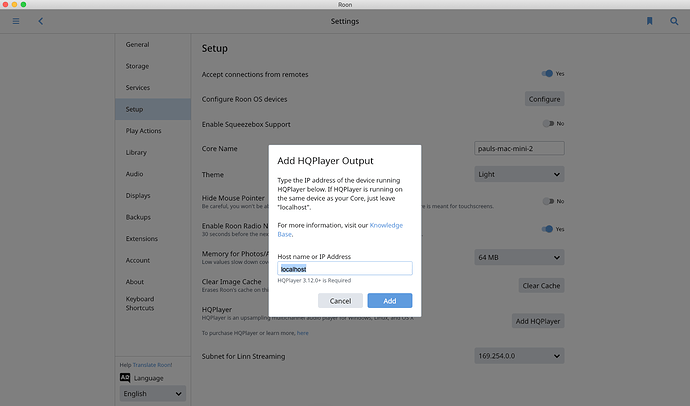 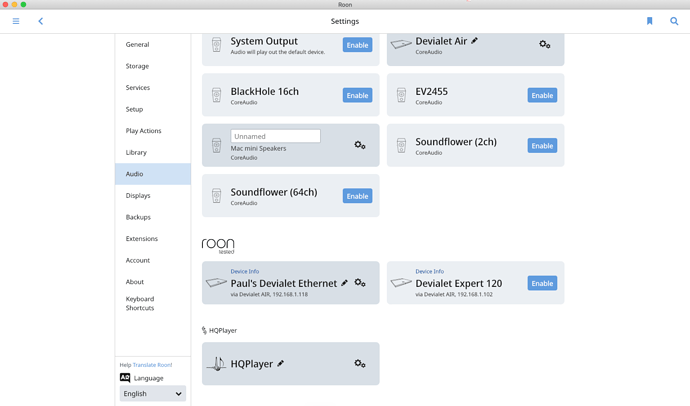 Thanks! Yes, did that!

Do you have HQPlayer and Roon Server on same PC

I have HQPlayer 3, not the most recent version.

I assume you are using a Windows PC (or a MAC).

Sorry if this is a stupid question, but is HQPlayer playing music on its own?
To configure HQplayer Desktop you need to install both HQPLayer Desktop (for configuration purposes) 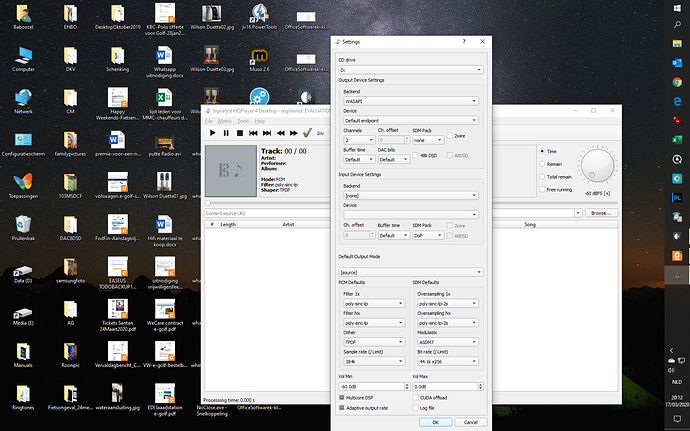 image1680×1050 662 KB
and eventually HQPlayer Client (if you want to use HQPlayer as your music player.
You want to make use of Roon of course, but for testing I would recommend to see if you get this running.
If that is all OK, than you will need help of Roon support.
Dirk
Paul_Jeno March 17, 2020, 7:19pm #9

Yes! I have Roon Core, Roon Server and HQPlayer on the same Mac Mini. Naturally, I only run ohne at a time (Core/Server) with HQPlayer.

So it is working with Roon Core then?

Thanks Dirk, for the advice!

Good suggestion of playing directly from HQPlayer. The thing is that I have no problem in combining HQPlayer with Roon Core. When I do the same with Roon Server, I get somewhat confusing IP numbers to Play HQPlayer to. But I’ll get there, with the good suggestions from this forum.

Why do you have roon core and server.Use one or the other on your mac mini.

I started to use Roon Server because it runs perfectly in the background, leaving the display free for other things. But you‘re right, it‘s certainly redundant using two systems.

When I do the same with Roon Server, I get somewhat confusing IP numbers to Play HQPlayer to. But I’ll get there, with the good suggestions from this forum.

Maybe you can try the follwong (don not know if it will help, but it should not hurt either):

Sorry, Jason, I don‘tquite follow. Say, I have Roon Core running on my Mac Mini, I use my Pad as a remote to control Roon.

Same thing is with Roon Server: I need my iPad to control the server.

Do I misunderstand something?

can you explain what you mean by HQPlayer being controlled only by one external piece of software?

Sorry for the dumb questions!

The Roon application comprises of; Server , Audio Endpoint and Graphical User Interface. Roon Server is the headless version, it does not have a GUI at all and must be control using a Roon Remote application.

So, an iPad is no Roon Remote?