I Don't Know if My Question is for Roon or Apple

I use my iPad exclusively to control Roon via my Nucleus. More often than I care to admit, I lean the iPad on the floor against my chair and forget to put it to sleep. The next day its battery is dead and I have to recharge it yet again.

Is there a way to set Roon to automatically put my iPad screen to sleep after its been idle for several minutes. It will automatically go to sleep if I leave it on any other screen, but as I’ve said, I only use my iPad to control Roon.

If you go into Roon Settings > Setup, do you have Keep Screen Awake set to Yes?

You might want to use No. Of course, it will sleep during your Roon session if you put it down for a while.

Thanks but I don’t see an option labeled ‘Setup’ when I go to Settings. As I said in my first post, the iPad does go to sleep when I’m on any other screen but the Roon screen.

I actually don’t use a case of any kind because I think they add too much bulk to the iPad.

Yes, I’m familiar with that type of case because my wife has one on her’s but I like using mine without one. 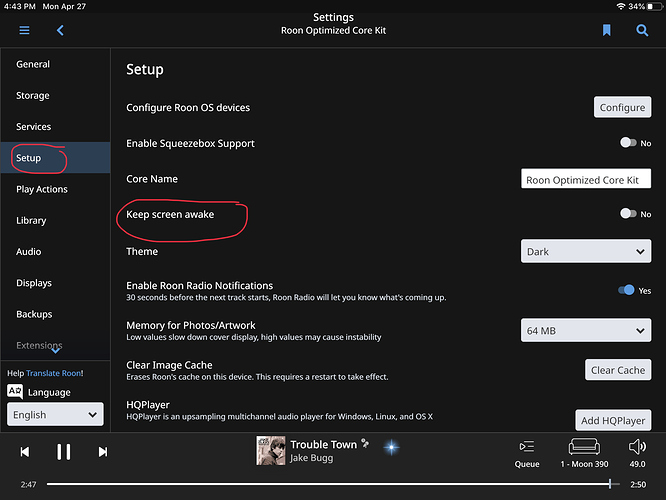 OMG Greg, I thought you meant in the iPad’s settings! I’ll go try what you’re suggesting right now and see if that takes care of the problem. Thanks!

OK Greg, I did have mine set to Keep Screen Awake and I’m sure your fix will work. Thanks so much!

My “moan” is the opposite , when you leave the Roon app for a while say an album, the iPad goes to sleep and the Roon app closes, so wen you wake up the ipad you have to restart the app as well …

I use one of the self shutdown covers , they seem to work fine

My “moan” is the opposite , when you leave the Roon app for a while say an album, the iPad goes to sleep and the Roon app closes, so wen you wake up the ipad you have to restart the app as well …

what ipad? this happens once in a while for me too, but when it wakes back up, it returns to the same album. it happens far less on an ipad pro with more ram … ios boots things out of memory far less often when it has ram to spare

Its old an ipad mini 2 . Quite often when i start Roon start music then use the ipad for something else when i come back i click the Roon icon , tye app will restart

It goes back to where it was OK

Happens all the time on all my Android devices to if it’s it’s bloody annoying.

My android stuff failed the Open GL test so no comment. I mostly use a Sony Win 10 12 in tablet and it rarely happen on that

Happens all the time on all my Android devices to if it’s it’s bloody annoying.

99% of the time, this is due to old hardware with low amounts of RAM

Samsung is notoriously bad for reusing model names on multiple products, but there are 4 products named the Tab S2. The best are from 4 years ago, the worst from 5 years ago. they all have 3GB ram, which should be more than enough for Roon (by a lot). If they are dumping Roon from memory, it means Android is being overly aggressive since it is expecting you to be using many apps. Try closing out (fully dismissing) most apps and see what happens… or if you are visiting the web browser, close out all your tabs. It might help.

As for the One Plus 5, it should have no issues… want to try the same thing and report back? try to take a video with another phone of what you are talking about exactly as well… maybe something else is going on…

@danny it happens definitely the more apps that are running, but this is still annoying. Other apps that are running don’t have to do this and they are also server based like Roon. Plex for one once opened never needs to reconnect regardless of how many apps are running. Is Roon that taxing on the os it needs to be closed or be disconnected?