I lost Airplay on RoPieeeXL

For the last couple months I’ve not seen Airplay available on RoPieeeXL. I have a Raspberry Pi 3b with a display plugged into a Peachtree Nova 150 via USB. I assumed maybe Apple’s latest Airplay 2 isn’t compatible with the open source version? I’ve tried switching from wireless to only using ethernet – either way Airplay does not show up as an option.

I suppose the next step might be to re-flash Riopeee, but wanted to check here to see if other’s have run into this and if there’s an easier way to get Airplay back.

Have you rebooted the Pi? Has happened to me to but very rarely. A reboot always fixes it. On the other hand, when it disappears from my wife’s iPad it is usually the iPad that needs the reboot.

Make sure that an audio output is not set to ‘Off’ 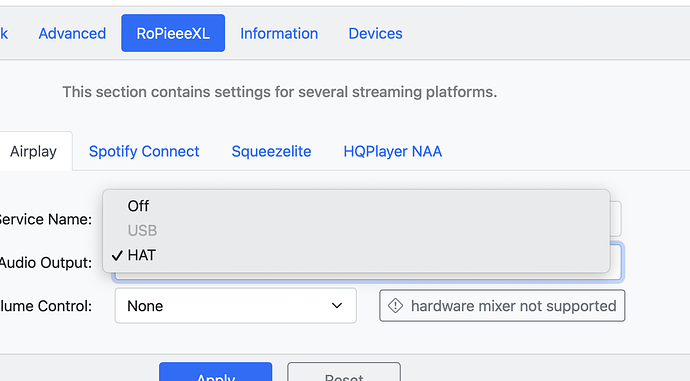 I toggled this off, rebooted, then turned it on, rebooted…

I have rebooted today when troubleshooting. Also this has been going on for months, so it’s probably updated itself many times.

Is it USB audio or any hats?
Do you use it as a regular RoonBridge and it is visible?
What device(s) do you use to look for airplay’s avaliability on it?
What network is used, router, etc.

Thanks @tudupka! I appreciate it.

Now that I’ve made that list, I do wonder if the new Centurylink branded router is somehow blocking Airplay. Other Airplay recievers are available on the network (homepod, Apple TV, Macbook) though. I disabled whatever ‘Cyber Security’ setting they have in here is as I’m reading on Reddit that it can interfere with Apple’s Bonjour networking, but so far no Airplay is showing up.

OK, I just want to report that I figured out what the issue was – or at least stumbled on making it work again after reading this post on reddit on this router.

I had RoPieeeXL set using both Wireless and Ethernet, and I’m guessing wireless took priority. The new Centurylink C4000XG Wifi 6 wireless router was set to use 802.11ax wireless. I set it back to 802.11ac compatibility, and the RoPieeeXL Airplay shows up. Switching that around seems to have made Airplay available. Oddly I put it back to 802.11ax mode and Airplay still works, so maybe it’s a matter of jiggling the handle there and knocking something loose. As well as turning off the ‘Cyber Security’ setting in this particular router (Centurylink branded Axom C4000XG).

Moral of the story: Maybe the router that comes with your ISP isn’t that great.

Switching that around seems to have made Airplay available. Oddly I put it back to 802.11ax mode and Airplay still works
I’d be careful with that, it might be still working because the device is already was cached, as soon as it is reset or cache expires it will disappear again.

Would also use wired ethernet if possible, but in you case it looks like some security feature blocks ports/traffic, so wired/wireless is probably the same.

Following up on this, I lost Airplay again. I just don’t understand what exactly makes it able to work or not. Maybe I’ll try re-flashing RoPieeeXL.

If re-flashing does not help, first I’d disable WiFi in RPI and use ethernet only. If that doesn’t do it, try the same thing as last time, switching your router to 802.11ac mode.

Thanks for your help @tudupka, I really appreciate it.

Using just Ethernet, or just Wireless in RoPieee – it doesn’t seem to matter. I’ll reflash here sometime soon and share my results with the community.