I missed a memo but why is there no support here?

This morning my remotes stopped talking to Core because I had not properly migrated everything to early access. However…

In any beta I’ve ever been in “early access” or “beta” or whatever has always had a separate support section so those in the beta can get quick answers and those not don’t have to deal with things that are of no concern to them.

The “early access” category has 1 pinned post “About the Early Access category”
Which states “In return we ask that you use Roon and ARC as you normally would and report any problems to us via this category.”

OK, let’s go over there for a moment…
That category has one pinned post unrelated to early access.

My post got merged to a support thread with 86 responses and down at post 37, 37, is a link to the early access docs that explain how to get remotes on early access. This is certainly my problem of not realizing this doc exists and I need to follow it. But, it seems, I’m not the only one who missed this required bit of work. I should also note, this issue did not immediately occur after Core update which is probably part of the confusion. It took 24 - 48 hours for all Remotes to finally report error. Roon may want to look into that.

Early Access is a great program but the support and communication need some review.

Again, the core issue is totally on me but I’ve been in this tech support game for a long time and if I missed how to self help myself out of this problem then something is wrong with the layout here. Please reevaluate.

Also, thanks to the ever diligent @AceRimmer for quickly pointing me in the right direction. I’ve got some work to do in order to migrate my remotes and teach my household how to use TestFlight. Just unfortunate I’m doing this about 48 hours later than it should have been done because I missed a memo.

Agreed on sentiment and most specific recommendations. I’m not as annoyed now as I was last night because I finished the move and realized that it was all on me not reading detailed directions.

I do think Roon needs a NOC, and likely a whole bunch of instrumentation on user environments. At a minimum they need to have 24/7/365 Watch and on-call (they may, but per the observation it sure doesn’t seem like it given threads like this that are “on fire”). Roon should know in advance if people are running mixed environments, if cores are flapping, if zones are skipping, etc. Some here will doubtless draw lines differently on privacy. But from my perspective, Roon is offering an appliance that is a managed service that has software running inside people’s networks, and they have to take a bit more responsibility for how it is operating if they want to maintain a luxury position with a growing user base and a subscription pricing model. What they can afford given current rev/profit & what their internal culture is I’m not sure. But this type of “expand the perimeter and the operating model” feels long overdue as a matter of how Roon (team) operates and interacts with Roon (installed hardware & software).

Been called a lot of things but that’s a first

Why isn’t info about the program pinned to the top of the Early Access Category?

Um - it was @mike’s opening post in the category - and it was pinned. The post has the link to the details of the program, but human nature being what it is, not everyone clicked on the link.

opening post in the category - and it was pinned

So call me way too analytical… maybe pedantic?
If I have a support issue I’m not clicking on a link with a subject that literally states it’s “About” a Discourse Category. I’m looking for something related to the Roon software itself.

not everyone clicked on the link.

I did click on the link. I didn’t realize a bunch of “abouts” included the required user steps to not brick the remotes (again, that’s on me). That’s like putting the critical install steps in the EULA and expecting the user to find them. No one reads the EULA and very few of us, already in the program, appear to have read the “about”.

Additionally… I knew I was hosed because my remotes were not on early access. I searched for the software in the community, I really did, but I had limited my search to early access which returns nothing. If I had searched support I would have been good. If the community search included things from the KB I would have been good. I did not search the KB and, in future, I’ll do that.

Roon’s strong point is not communications. I don’t think they are good at thinking through every customer situation and making it easy for ALL customers to keep up with what is going on and finding what they need.

I’m going to let @AMP respond about support policies for Early Access, but feedback about new functionality and regressions specific to Early Access builds should absolutely go in this category.

Also, to be clear:

Why isn’t info about the program pinned to the top of the Early Access Category?

This is not actually true – it’s just because the forum software unpins topics once you’ve read them. 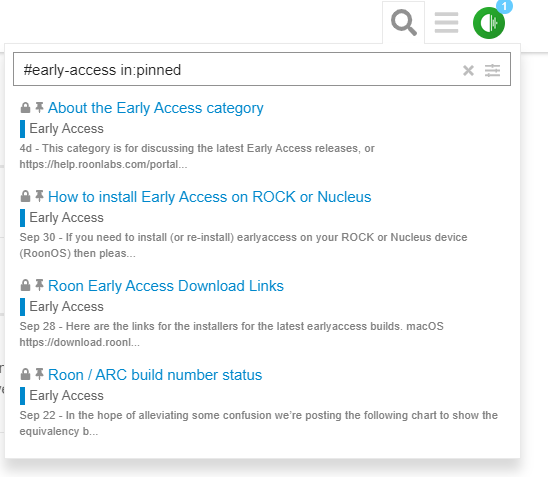 Anyway I’ve now moved those posts (and the latest release notes) to #early-access:early-access-info so they’re a bit easier to find.

Thanks for this. Apologize to the team if I came off as harsh or overly critical this morning. I upgraded like 48-72 hours ago. Everything worked 48 hours ago. My wife said her iPad stopped working last night but Android worked. This morning my Windows and Mac remotes stopped working. 1 Android tablet worked but the one she used last night did not. The cascading failures, even though I realized this was a prod / early issue compatibility issue, plus the combined lack of search results, started making me believe I had a Core problem (start panic mode).

To top off the whole bit of confusion this morning, Play Store didn’t show an update (but it did say I was beta). Finally, after a few reboots one tablet saw the update. The other tablet required clearing cache and app data out of the Play store. Not a Roon issue but seriously complicated solving / troubleshooting.

Just a massive comedy of errors on my part for sure. This was the most complex and time consuming upgrade I’ve ever done to be honest. Usually they are smooth as snot. My initial post was needed because I didn’t find the instructions on how to migrate all Remotes to early access (although they had been working since joining early many many months ago). Up to 48 hours ago, when the last remote died this morning, I didn’t realize I was running straight into my own outage. And, as you point out, I had to have clicked on that link previously for the pin to disappear.

The matrix that is on the Release Notes for general isn’t being done for early access which is another datapoint that caused me confusion.

I’ve noticed all these “little” things before but when nothing is working and you’ve not even had 2 minutes to start the morning routine they snowballed quickly.

Again, appreciate the community and the Roon team. I just had a very bad Roon morning and I guess I was due. Been smooth sailing for years here

Also a good reminder to check the KB.

We’ve all been there. Thanks for bouncing back. Now, let’s enjoy the music (and give the mods and Roonies hell…)

So I’m psyched you’re on board.

I’ll say I’m still behind what I wrote above about NOC / on-call / instrumentation / support model.