I’m wondering if roon identifies Primary Artists in albums which itself are not identified? It doesn’t seem to but it never hurts to ask.

An example (from a digitized vinyl roon doesn’t know about): 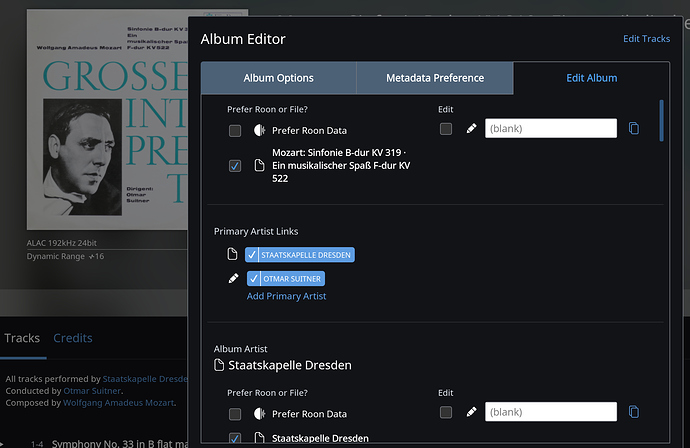 Since I’m pretty sure roon knows Otmar Suitner (allmusic does know him), it would have been nice if roon would enrich the artist with its metadata - but it doesn’t.

Other than adding the album to musicbrainz I don’t see a chance to make roon recognize the artist - or is there a way?

We need a single piece of identified music, then the right person will exist in your library and show up in that list for you to select. It could be an album, or a track on a compilation, a credit, etc, but we need something in your library to match a person before we start attaching unidentified content to a known person.

Find an identified album with Otmar Suitnar, add it to your library, and you will get the metadata. (You may have to delete/merge your current blank Otmar artist though as depending on how you do it, you may end up with two such artists))

Ah - OK, thank you. Haven’t read that post (because the subject didn’t seem like it fit my question). So I’ll have to go the musicbrainz route to get the album identified because the other “Otmar appearances” are all on unidentified albums here.

Do you have a Tidal subscription? He has many albums on there.

@mike i have commented on this before. What is someone supposed to do if they can’t get a suitably identified album into their library?

Do you have a Tidal subscription?

No, have not. I just added one of the records to musicbrainz; in a day or two I’ll then have the album identified and Otmar will get his headshot and bio…