If you oversample on a NUC 10, how hot does your CPU run?

The one thing that convinced me to keep Roon despite my lack of love for its interface is how good RAAT sounds when upsampling everything to DSD256.

I am running Windows 10 Pro on an NUC 10 i7 with 16gb RAM. I kept Windows 10 rather than run a Linux distribution because I use JRiver for metadata entry and file management and because my previous Linux products have convinced me that I am more confident troubleshooting in Windows than Linux.

Unfortunately, I am finding that running Roon at DSD256 all the time is keeping cpu temperatures in the 70-85c range. I have tried a few tricks in the NUC BIOS, such as turning off Turbo Boost, but, while that got the temps into the 40’s, it also crashed out Roon periodically when I upsampled. Are other Windows users experiencing similar operating temps when oversampling?

I know some of you have set up Rock on NUC 10`s, after changing the BIOS boot settings and using external NIC’s. What are the temperature readings that you are getting?

I have tried a few tricks in the NUC BIOS, such as turning off Turbo Boost, but, while that got the temps into the 40’s, it also crashed out Roon periodically when I upsampled.

Please list the all the tricks. Crashing does not sound right to me.

The benefits of this CPU revolve around how Intel have configure it to ramp processor speeds up and down to be as efficient as possible. This allows it to run well under normal use. Things to note are it’s low base frequency, and the fact its TDP shifts between 15w and 25w when it used more than four of its six cores. That means the things we typically do in Roon, i.e. single core operation and turbo boost for the clock speeds will push this chip outside of its comfort zone. And turning off Turbo Boost cripples it.
My suggestion after a very quick and dirty analysis is to turn on sigma delta, leave Turbo Boost at its normal setting and allow the chip to manage its own efficiency. That should allow it to find its own sweet spot when working it relatively hard.

Nothing fancy. Turned off TurboBoost, as mentioned. Tried the “Cool” and “Balanced” settings in the fan selection, and kept the “Cool.”

The “crashing” to which I referred manifested as, usually, play stopping with an error message that the file did not load completely and, once, with Roon shutting down. It started up immediately when I clicked on it again, but it definitely stopped running. Haven’t had these issues since reverting to TurboBoost enabled.

Sorry, Henry, I didn’t see your response until now.

I have have sigma delta turned on (7th order CLANS) and parallelized for the entire time I have used this NUC.

Thanks for your assessment. Sounds from what you are saying that this chip might have been the absolute worst choice possible for my intended use. Others on this forum kept suggesting that an i3 would have been up to the task, even with oversampling, so I thought that I would be able to keep up easily with an i7.

Also, @Henry_McLeod, do you think it makes a difference that I am running Windows 10 rather than a ROCK setup? I don’t know anything about the overhead on Windows versus Linux, although I assume it would be lesser on the latter.

I would install ROCK if it would extend the life of the NUC without compromising my ability to use DSD. I pegged 92c briefly on one core this morning!

I genuinely don’t think the latest chips with very low speeds at idle suit Roon. They seem to be a big departure from the gen 5/6/7 processors ROCK and NucleusOS were built around. But that said I don’t think using Windows makes an appreciable difference as long as you have enough (8gb) RAM. But trying ROCK only costs time!

Finally I presume you are using acsuitable 19v 5amp PSU?

Yes, using the stock 19v switching power supply. Thought about using an LPS because I have them on most of my equipment, but I am not using the USB ports for a direct connection to a DAC and instead am only streaming over ethernet. Can’t get information about whether using an LPS would make a difference in this application.

I also run the NUC over ethernet to a streamer running HQPlayer NAA.

To help out your wallet… I did not manage to discern any difference between NUC + LPS (keces p8 at 19v) vs NUC + stock switching power supply.

However, if you connect NUC directly to DAC, then yes, an LPS did give an audible improvement.

@Roasty , that’s exactly what I would have expected. Thank you for that information!

Upsampling in Roon is a heavy load on any CPU and a NUC is not exactly a heavy lifter - if you really want to do such DSP loads or even HQP then get a decent desktop class workstation CPU and use the right tools for the job at hand…Sorry to sound blunt but you don’t use a mini to move house full of furniture.

I exchanged my NUC for the same model as I was within the return window. The new one is running upsampled Roon at roughly 45c-55c, with occasional spiking into the low 80c’s, even when I play music for hours. At the same time, I am getting an average of 3.3x processing speed when upsampling. I won’t say the NUC is loafing along, but these aren’t worse temps and numbers than I got on a general purpose 2020 model Dell XPS8930 desktop with 10th gen i7 and 16gb RAM before I bought the NUC to use as a dedicated server.

I believe my previous overheating problems were due to a bad NUC, although I will add that Audirvana upsampling puts a greater load on the NUC and it has moments of unhappiness with that application. For Roon, though, I think the management is correct that a Nucleus±level spec should be able to manage full-time upsampling. 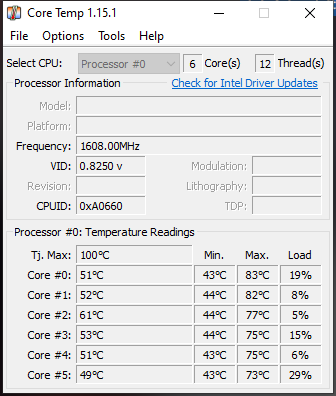 Well if it can keep pace sure go for it. YMMV indeed.

Just ran across this on another site. They haven’t tested the current NUC i7, so I can’t compare Gen 8 i7 versus Gen 10 i7, but this might explain why your Gen 8 i3’s outperform my Gen 10 i7 and why mine doesn’t perform as many expect.