A further issue I just stumbled on the other day where there was a discrepancy between Roon and Tidal metadata. I wanted to upload the new much heralded release by Sony of Igor Levit’s release of the complete Beethoven piano sonatas. I was outraged when I saw the track list for the album showing 102 movements without any way to locate or play a complete piano sonata. I was outraged at Sony for so mishandling a major release by such a major label. Then I went direct to Tidal and looked at the album. In Tidal the track list does list the sonata identification along with the name of the movement.

This is still piss poor. Any standard release of a multi-work classic album has a listing for each complete work and then the individual track listings for each movement indented below it, allowing you to make a single selection to play either a single complete work ( in this case a single sonata ) or any single movement.

I don’t know whether Sony deserves blame for this sub-standard track scheme. I tried to find a way to communicate my complaint to Sony and have not found any way to contact them from their internet site. I avoid social media normally. There may be a way there. Perhaps someone at Roon has a friend who has a friend that might mention the shoddy image that Sony is projecting to the streaming world.

But I cannot imagine why the listing in Roon is so different and so much worse than the listing in Tidal. I thought Tidal metadata was just a pure pass-through via Roon. Below the listing for the first track on the album:

Track One on Roon:
i: Allegro

Thanks for any clarification or improvement you may be able to facilitate.

I’ve split this out into it’s own thread.

I would be happy to, but don’t know how to. Is there a step-by-step somewhere?

You can see steps describing how to share screenshots here:

Sorry, I found your link to the screen shot steps in the e-mail.
I’ve got the shots on the clipboard, but I can’t find how to paste them into this reply window. (somewhat shame-faced at my computer illiteracy.

No worries! What kind of device are you using for your reply?

Hi @Alan_Rossitter — Once you’ve copied the image you can paste it by doing one of the following:

I’m sorry for being dense. I have an icon on my taskbar that shows reduced images of the 2 screen shots. If I click on one of the images I see it displayed in fuller screen. If I try to open the Roon reply window the screenshot disappears back to the task bar. If I press Control-V without the reply window nothing happens. Right clicking the icon gives me a set of options completely unlike what you’re showing.

No worries! It may be better to, instead of copying and pasting, trying to download and upload the images.

First, save the image to your machine. Then click the picture upload icon here on Community and it’ll allow you to choose pictures that you have downloaded on your machine. You can also drag the image files in this way. 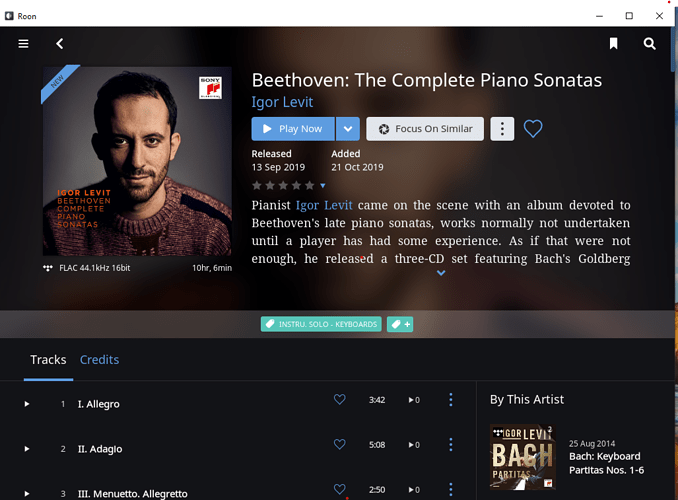 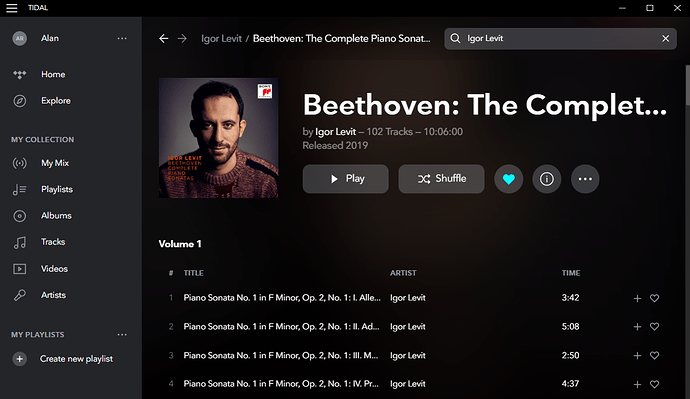 Just FYI this is what a minimally competent track list for this type of collection would look like:

Thanks, @Alan_Rossitter. I’m going to look into this with the team and will follow up when we have more information.

I have never hear anything further. I know this is not a high priority type issue. Still curious though. I checked and it still shows full track ID when I access Tidal direct, but not in the Roon library version. I even tried deleting and then re-adding the album in Roon and still get just movement ID’s without the Sonata number on the Roon album track list. There are 102 sonata movement tracks FYI. Not user friendly even if they are in correct numerical sequence.

There have been some changes here to address this — Can you confirm if things are looking correct for you now?

Can’t thank you all enough. A big little thing for me. It’s perfect now.
Thanks again.