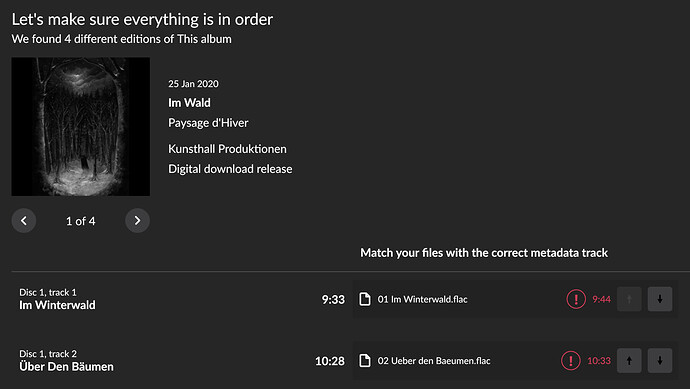 Most of the track lengths for the “Digital download release” of the album are incorrect. Correct timings can be found here: Release “Im Wald” by Paysage d'Hiver - MusicBrainz. This causes digital downloads to match with the CD release.

Don’t think this is revelant given the problem is on the metadata side (track timings are correct).

What do you mean by this?

What do you mean by this?

Looking at possible releases when identifying album there is a “Digital download release” version. It’s the one shown in the screenshot.

The 9:33 looks like it came from the limited edition usb key release, probably roons metadata supplier is incorrect.

The 9:33 looks like it came from the limited edition usb key release

Good catch! I checked AllMusic (Im Wald - Paysage d'Hiver | Releases | AllMusic) but it didn’t look like they had a digital release listed.

Thank you for reaching out with your question. Roon establishes a Canonical version of albums based on a number of factors. You can think of it in general as being the most widely released initial version of the album. This is the version that most customers are likely to have in their collections. There can be slight differences between the canonical version and other versions of the album, such as a digital download.

In your case, the version you were given is exceptionally rare, as described on Musicbrainz:

USB stick encased in wood and engraved with a forest landscape and the album title given out exclusively to attendees of an invitation-only Facebook event on 2020-01-25 in Burgdorf , Switzerland. Contains MP3s of the album and cover art. Limited to approx. 50 copies.

If you would like to defer to the file metadata tags of your limited USB copy you’ll need to click the ellipsis button on the album page>edit>metadata preference>prefer file.

In your case, the version you were given is exceptionally rare

I think you’ve got that the wrong way around. The version I have locally (in FLAC) has the longer track times matching the standard Digital Media release (Release “Im Wald” by Paysage d'Hiver - MusicBrainz) where as Roon is using the track timings from the USB key release (Release “Im Wald” by Paysage d'Hiver - MusicBrainz). You’ll see in my screenshot that Roon is expecting the first track to be 9:33 which matches the USB key release. The other 3 releases on Roon are CD, Casette and Vinyl so the standard digital release appears to be missing.

I wish I had the USB key release but alas, it’s just the bog-standard digital copy from Bandcamp!

Thank you so much for the correction. I was a bit excitable thinking you had the limited USB key version of the album.

The CD version is our designated canonical release of this album. As mentioned previously it looks like there’s a slight time difference in tracks between the red book physical pressing and the flac version. If it were me, I would use the Disc version metadata and be happy.

If you’re not keen to do that please use your file tags instead. If Roon creates a local only Paysage d’Hiver artist for this album you can merge it with the the artist entry found in Roon.
You can merge artists rather easily in Roon. Here’s how you do it.

Select both Artists on the artist page.

Select the Primary artist. When merging artists you’ll want to set the primary artist as the one with Discography, artist bio, etc, in order for these metadata assets to appear.