There is a considerable number of albums that are listed twice in my library, the quobuz version and my library version.
the match is automatic for a good portion of the added albums (i’d say about 70%)
the match needs manual action via identify album (for 10%)
The match is simply impossible for the rest of them (20%) because the quobuz version is never listed in the match dialog.
I also noticed that this proportion shift dramatically with newer releases, although regrettable this is understandable.
But what I don’t understand is how a quobuz album that is listed under an artist page is never listed in the match dialog search result when searching the artist name (or the album name, or both).
here is an example for one artists “Daniele Di Bonaventura” where 5 local albums are not matched with their quobuz versions.
This would not be a problem if the identify dialog would list theses quobuz version via it’s search function. 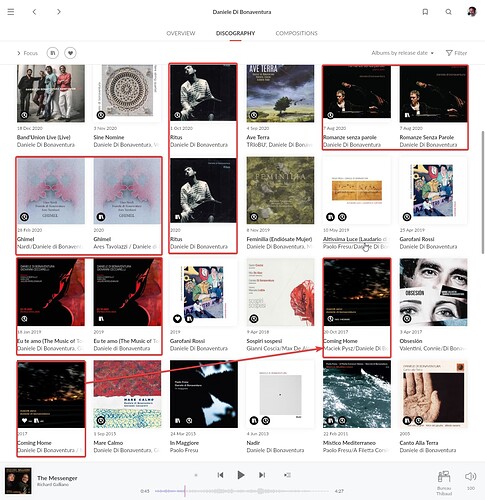 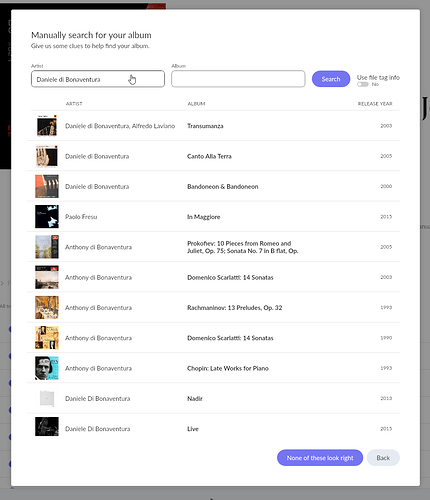 Edit: I managed to match 2 of them (“coming home” & “Ghimel”) via a search of the artist name, but 3 remains unmatchable (which is consistent with 20% estimation given that I have 15 albums of that artist and 3 of them are unmatchable)

Thank you for getting in touch with your question. It doesn’t look like our metadata providers have information on these releases in their data, because of this these albums aren’t being identified successfully as the same albums you’ve added from Qobuz.

Here’s what you’ll want to do to address this:

That will do it!

Hi Jamie,
Thank you for the answer, So I understand that roon metadata provider isn’t flawless and that it is in no way related to quobuz. This explains quite a few things. One has to wonder why wouldn’t roon consolidate it’s DB with data from quobuz or tidal ?

Also to clarify, this wasn’t a screenshot form my album page but from the artist discography page.
I did not add the quobuz versions of theses albums to my library (What would be the point as I already own them locally ?)
So your suggestion does not work for me as editing is only available when library albums are selected