My core is Intel NUC NUC7i3BNH (on ethernet). Roon version is 1.6 (build 401). My output is a McIntosh MA5300 integrated amp (built-in DAC; no ethernet input). Connection from NUC to McIntosh is with AudioQuest Cinnamon A to B 0.75m USB cable to USB Audio input on McIntosh. Running Roon on Mac OS 10.13.6, with Roon Remote on iPhone 8.

I also use Chromecast Audio as an endpoint (Wi-Fi), connected by TOSLink cable to same McIntosh MA5300 DAC as above.

My problem is that SQ is significantly better using Chromecast through Wi-Fi than hard-wired USB directly from NUC. As such, I think I should be getting better SQ through USB.

Would a possible solution involve an HDMI-Optical adapter (HDMI from NUC to adapter, TOSLink from adapter to McIntosh)?

Any other ideas? Roon Bridge? HQPlayer? (I would need support setting these up!)

Thank you in advance!

Roon sounds less clear and without the same detailed accurateness than Qobuz an Tidal Windows Software
Vincent_Kennedy March 10, 2019, 2:48am #2

@Seymour_Stern - I don’t know your MA5300, but it may be able to play far higher resolution files via USB then any other digital input. If so, stick with USB.

If you have the funds, put a Sonore microRendu or Metrum Baby Ambre between the NUC and the your McIntosh. You will be pleasantly surprised. Oh, there’s Sotm SMS-200’s as well. All of these have various power supply options.

If you want something a bit more DIY, look at an Allo USBridge. Lots of success with these if you are slightly computer inclined. With a reasonably priced iFi, power supply, they sound far better then they cost.

Poke around here on this site. There’s quite a number of threads about this topic and the products I mentioned.

@Seymour_Stern - I just noticed that you wrote you might need help setting something up. If that is the case and you can afford it, take a look at the microRendu. If you can operate your cell phone, you can operate it. I have one and it sounds very good to me. I get compliments frequently from guests at the sound quality of my living room rig.

My core is Intel NUC NUC7i3BNH

I’m confused… are you running OS-X on an NUC?

Why don’t you use ROCK?

@Vincent_Kennedy - Thanks. The Allo USBridge sounds interesting. I will look into this.

Look at the signal path display in Roon to see what the system is doing. Is it downsampling? What does the McIntosh say it is receiving?

Here is the signal path. The McIntosh is receiving 44.1kHz 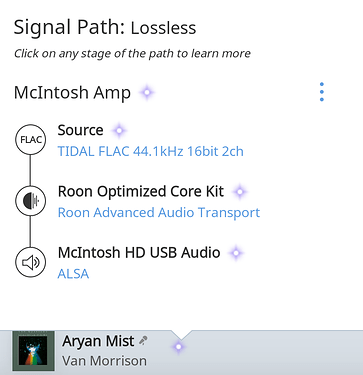 Ok, good.
I encourage you to do some troubleshooting before jumping on buying another gadget. Try another USB cable, cables sometimes go wrong. Can you get hold of another DAC, feed it through USB and go analog into the Mac. Experiment.

There is a lot of talk here about the deleterious effects of USB, but there are contrary opinions, and in any case nobody feels it it causes really bad distortion. And there are opinions on Toslink, and network routers, and power supplies. Be calm, do some troubleshooting.

I have nothing against the MicroRendu, but don’t do what I did: I bought one with a fancy power supply, cost as much as a good DAC, and then I found that it sounds no different from m6 network link. Not a fault of the MicroRendu, it’s just because i didn’t have a problem that the mR was designed to fix. (I still use it in a different room where direct USB is not an option.)

Sage advice, @AndersVinberg.
I upgraded to the AudioQuest Cinnamon USB cable after using the Oyaide Neo d+ Series Class B USB Cable, with no discernible improvement. I’ll have to figure out from whom I can borrow a decent DAC. I hear slight distortion in the 1kHz to 4kHz range, particularly in vocals, and especially when there is more than one vocalist. Furthermore, I’m simply not hearing what I would expect from my McIntosh integrated amp and Spendor D7’s. I have this nagging feeling that either the built-in McIntosh DAC is faulty, or there is some compatibility issue here. Anyone have thoughts on this?

You could also try hooking up an entirely different computer to the USB in on the McIntosh. The more you rule out the better.

Yep I would try and rule out it’s not the amp first. Can you try Roon core on a mac or PC and try that to see if you still get the distortion.

Thanks for the additional advice. I’m painstakingly testing those alternatives. My current assessment is that the McIntosh integrated DAC may be the problem. There’s almost a consensus on the web that McIntosh amps have amazing sound. Maybe mine has a defective DAC.

Maybe mine has a defective DAC.

OR, it could be that McIntosh’s DAC and/or USB implementations are not the best. Given the clipping issues you already faced.

Personally, I would just get a separate DAC and treat the McIntosh as just an amp.

Major news release for me today by Roon. McIntosh and Roon have finally partnered, and my MA5300 is now a ‘Roon Tested USB Device’. The Roon Partner Programs page (https://kb.roonlabs.com/Roon_partner_programs) specifies that the MA5300 is a ‘Roon Tested DAC’. So, would anyone be able to advise me what that means with regard to my SQ issue, which appears to point to the MA5300 integrated DAC? Assuming it’s not faulty, why would Roon partner with a company that makes an inferior DAC? It’s disconcerting to think I may have to purchase a separate DAC when the MA5300 is so highly rated, and now is Roon Tested.

Roon Tested would show up incompatibilities but doesn’t offer any guarantee as to SQ.

If the Chromecast optical input is fine then suspicion moves to the USB implementation as Rugby has suggested. I saw a 2017 post here that noted the McIntosh DAC module didn’t have isolation circuitry on the USB input. Not sure if that has changed.

Actually, the Chromecast is also not good. Sorry I misled, but it turns out the Chromecast settings had bass and treble turned up all the way, so it was deceiving. The SQ is MUCH better when I bypass the MA5300 DAC using analog input, with an old CD player as source, or even through the headphone jack from a computer, and with no distortion whatsoever! So this is looking more and more like a faulty DAC.

I know it is an old post but might be useful for some. Had exactly the same experience as you Seymour when I was using Cinnamon USB cable, my Chromecast did sound a lot better and the USB did sound poor. I have invested in Tellurium Q Black and it has changed my listening experience like night and day. I am upsampling everything to DSD256 which sounds absolutely amazing on my system. Cinnamon cable was a weak link.

Turned out that the MA5300 DAC was defective from the day I bought it! When I finally concluded that the problem must be in the DAC, I had my dealer send it in to McIntosh for diagnosis. At first they couldn’t find the problem, and only after I had a lengthy talk with the technician on the phone, explaining the symptoms in detail, did they finally agree that the DAC was defective from the start. After replacing the DAC, the unit sounds great!