What’s this? Routine and benign or cause for concern? Thanks for any feedback. 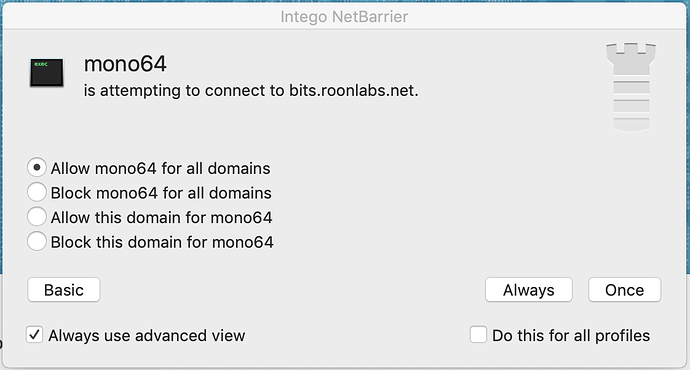 Mono is the cross platform development environment that Roon uses. It might just be a normal update check. But, @mike might be able to tell us more specifics.

@David_Dunn: Seems to me like the Intego firewall is somehow missing which app / parent process initiated the connection. As @Rugby said: Roon uses mono. Roon as well as RAATServer (probably) use some network functionality provided by mono64 so you will see requests like that for all places Roon wants to go for metadata, update checks, licensing and so on.

Also interesting is the fact that obviously the firewall monitors local network traffic (the IP mentioned is somewhere in your local network). Usually it should be OK to allow trusted machines local network communication.

Thanks guys. I’m well served and at ease.

I got this “mono64 is attempting” warning on my Mac recently, too, I think after the latest Roon software update. I didn’t know what it was, so I panicked and denied it. Only later did I realize it might have something to do with the Roon update. Unfortunately after that my remote Roon db backups from Nucleus to Mac via SMB file sharing stopped working. After some poking around I restored the “mono64” privileges in Firewall but still had to delete and recreate the file sharing setup before Roon db backup started working again. I wish that this message referencing the mysterious “mono64” could somehow indicate that it’s a Roon service so it would be clear it’s safe to authorize.