Very strange issue. I can find Poco Indian Summer using Qobuz directly. But when in Roon —>Qobuz it does not show up. Try it. How come certain selections are not available through Roon?

Qobuz version turns up for me (US subscription) by doing a general Roon search for ‘Poco Indian summer’ and scrolling down to albums, or ‘Indian summer’ specifically then Albums->View All. It’s not necessary to be in the Qobuz section of Roon to do this, but that action works from there as well.

Found it, no problem at all.

yes through Qobuz, but not Roon to Qobuz right? 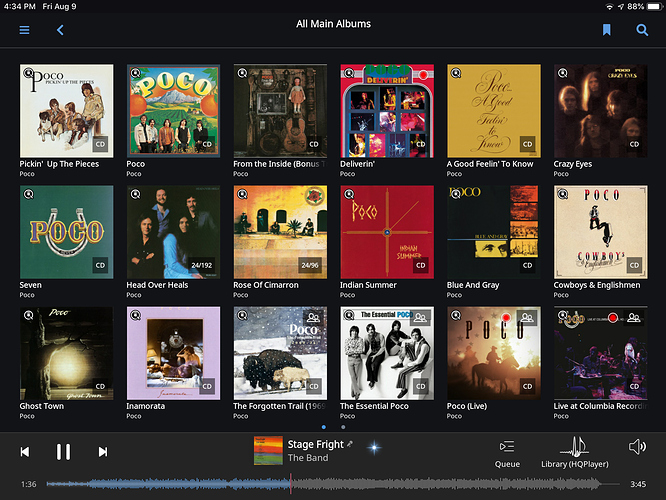 that is bizzare. it doesnt show up. I tried again no luck every album EXCEPT that one album. I wonder what I am doing wrong very weird.

I will try that

NG. Shows 19 albums and that one is missing. I don’t have any tracks from that album in my Qobuz library

Not your Qobuz library…your local library. If you have that album in your local Roon library it will not show up in the Roon Qobuz list.

it is NOT in my local library. However on my phone i saved it to a playlist

I don’t know what to tell you…

I appreciate your help thank you. maybe one of the Qobuz reps can assist

Is it possible you have a track or two of this album in a local playlist ? If so Roon may have created a version of the album in your local library restricted to those tracks.

It would still show up as a local album in album view…and then he could pick the different versions on Qobuz.

I don’t think this is a Qobuz problem, I’ve had this happen with both Tidal and Qobuz often. In fact, it happens often enough that I leave Tidal and Qobuz open on my machine so I can go in and do a “real” search, favorite the album I know is there (but not showing on Roon) and then go back into Roon settings to update the library. This has nothing to do with partially favorited album, etc., but rather something in how Roon in interpreting exported data from services or how those services are sharing their data.