thankyou all - got it working.

A google search for jazz Flac brought up an article from October of last year indicating that Europajazz would be broadcasting in Flac. I couldn’t find a Flac stream on their website.

Anyone using their stream in Flac?

That is the station I want so badly but I found one link that didn’t work. Please post if you find one

From here, I could get it to play on my iPad (though not Flac) but Roon wouldn’t accept the url to add as a radio station.

Thanks - does anyone know if there are any BBC high res streams, I have been looking but not found yet. Thanks.

The BBC have ceased their trial, but were using a strange format. Brian posted about it here:

Support for more codecs (including FLAC) for Internet Radio streams would be lovely [FLAC delivered in Roon 1.5] Feature Requests

The BBC stream uses MPEG-DASH–it’s not like the other FLAC streams mentioned earlier in the thread. Much more complex to support–both technically and commercially. The BBC has a penchant for piloting a new streaming technology every few years. I remember when we added MMS support to Sooloos solely because of the BBC. I remember when we added HTTP Live Streaming support to Roon solely because of the BBC, too. It’s pretty perplexing why they are using DASH for this–since they already support HTTP…

http://thesoundofjazz.net:8000/TheSoundOfJazzHD works but still only 320k

Nice variety of stations there. I added them and look forward to trying them out.

What about Radio Paradise FLAC streaming?
Does anyone have idea how to make this link working in Roon? https://marco79cgn.github.io/radio-paradise/

Magic Radio Link does not seem to work

What about Radio Paradise FLAC streaming?

Further development of Internet Radio is on the roadmap. Brian has noted support for OGG/FLAC as being a matter of scheduling the effort. But Radio Paradise has an individual way of serving up FLAC (see post 31 from Bill Goldsmith of RP on this JRiver Forum thread) that imposes some requirements on the player and creates development issues. If RP were amenable to providing a usual OGG/FLAC stream in addition to their own API (which serves up metadata and a slideshow) that would put them on the…

Magic Radio Link does not seem to work

It’s down for me too. It may come back up, don’t know.

Hi Vule,
Yes, shame about that. It’s one of my favourite stations.

Couple of months ago I asked JazzRadio.com support team about dropouts and cut outs after 15,20 minutes of listening of their stations links in Roon (256 kb/ 320 kb) and they replied to me that happening due to Roon software limitations to handle sample rate change (48/44) and put all blame to Roon. Though, there was no problem at all with 128 kb streams.

A post was merged into an existing topic: Internet Radio URL Swap Meet

hmm having trouble with this… Am I to right click on the core software? I assume so. I get no popup menu…

maybe this has already been posted: 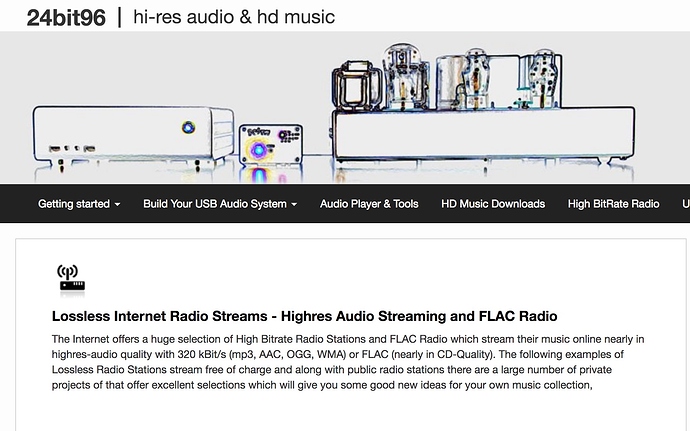 You go to the internet radio screen on the core software - the station that you want to add the image to. Right click and you won’t get a pop-up menus but in the upper right you will see “edit” - click on that and you will see the same screen as when you originally added the station.

At the moment JB Radio-2 is streaming 192kHz, the interesting thing is that the stream arrives at my core at a rate of 2.5Mbps, but arrives at this computer from the core at 6.5Mbps, which is what you would expect playing a 192kHz file. It is almost like there is some MQA type folding done that the core unfolds and sends to the endpoint.