Thanks Rene. That sounds exactly the same as we experienced.

I wonder why HiFiBerry limits the DAC to 192kHz with their official Roon Image.

I may ask Daniel at HiFiBerry, just out of interest only.

Thanks for your feedback

32Gb SD-Card never worked out of the box.
It’s expanding and checking forever!

I got once an SD Card with 32Gb running with Ropieee, but only after I deleted the whole partition with a partitionmanager and made a fat32 GB primary partition and after that imaged the Ropieee Image. But also this only helped once.
And 32GB for such a small image is a waste

I could only imagine, that it has something to do with clipping.
Most of the time images like max2play recommended to set the DSP-Volume to max 96DB I guess.
With 100DB in alsamixer it always sounded very harsh with Dac+ Pro.
So when you are now upsampling to 384khz the frontier for clipping and bad sound could be lower than the 96DB.

With Roon you could easily set up the headroom and avoid such behaviour.

I’m guessing this is related to the kernel they use. For RoPieee I’ve patched the kernel to support 384K. I’m doing that as well to support native DSD for certain USB dac’s, but maybe HifiBerry just uses a ‘stock’ kernel.

Thanks Harry, that makes sense.

It’s not a big drama at all, I was just curious but it didn’t affect listening because we could reduce it down to 24/192 anyway.

The album art not changing after a couple of tracks was strange though. The music kept playing to both the HiFiBerry Digi+ and DAC+ Pro HATs though, but the album art stopped changing on the screen.

Just some feedback, not at all complaint

I’ve pushed an update to the beta channel. This is largely ‘under-da-hood’ work.

As usual this update is being pushed to your RoPieee over the coming hours.

@wizardofoz could you report on the digiamp?

Hey Harry, very minor and not urgent but as per my earlier observation can you change the following names in the HAT list:

Just to make it all slightly clearer and more inline with HiFiBerry’s naming. 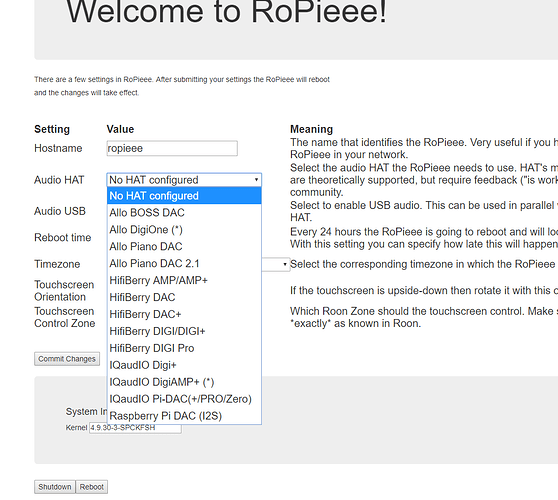 I’ve updated to ext. 0.3.0 and the after-shutdown-and-power-on-the-screen-does-not-come-alive thing is there, when Roon is already playing

This time however, a ‘reboot’ from the ropieee.local page doesn’t fix it

Only a ‘commit changes’ from the ropieee.local fixes it. Previously, the ‘reboot’ worked to fix it.

This is a small difference to previous ext. 0.2.3 (or whatever the previous was)

Still no sound tho

Extension is 0.3.0 and was already updated and reflected before I made the change.

@spockfish I just went to the web page again to do a shutdown, but before I had a chance to do so it Rebooted and is now stuck in a reboot loop

Here are some rather hasty screen shots of just before it restarts…I think it’s time to reflash the image with a new one…looks like it’s toasted.

If there is a way to recover any log let me know and I will do what I can. 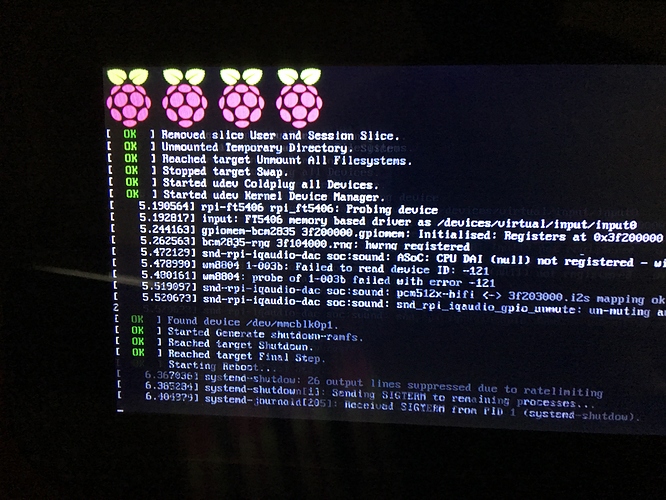 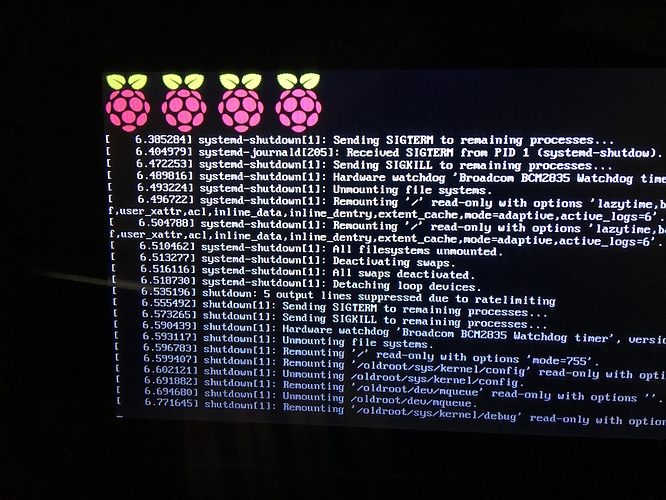 Ok I got a HiFiBerry board and just installed DietPi, just to convince myself everything is fine with how the HiFiBerry boards were showing up at my old man’s place.

Everything looks the same, which everyone probably already knew of course but I was looking for confirmation.

One interesting thing is HiFiBerry’s official Roon image doesn’t allow DSD of PCM (DoP) in the Roon settings. But I do have the option with DietPi (and obviously should with Ropieee too but I’ll install that later).

So there are some HiFiBerry restrictions with HiFiBerry’s image - max 192kHZ and no DoP support.

Thanks for the information - I’ll give it another try once I get myself a smaller SD card. I’m also currently will be away from my base for about 4 weeks, so it will be a while before I can give it another go, maybe by that time, the Ropieee display will be in its final version!

New updates working fine for me. Last two have been tickety boo.

I need to check in hear more often. Sorry.

Only difference in terms of drivers for the AMP / DigiAMP above the Pi-DAC/DAC PRO/Pi-DACZero is that we use GPIO to control the AMP’s mute/unmute.

Use this overlay fine in /boot/config.txt to unmute the amp at startup
dtoverlay=iqaudio-dacplus,unmute_amp

Thanks. I’m the author and this is exactly what I’ve done

I don’t have the device itself, so that’s difficult testing.

@wizardofoz could you please test again? And describe what’s happening? And for clarity sake, leave out anything related to our ‘little’ experiment with the touchscreen

Thanks Harry, I have another digiamp+ without the lcd to play with too so maybe need to get a new SSD card or 3 to test some other images without risk of breaking a working image.

Ok thanks. Would be cool, because RoPieee does exactly what @Gordon_Garrity describes so it should work.

I’ll wait for your feedback.

Can you PM me your address and I’ll get boards out to you.

Just pushed out another update on the beta channel.

Besides fixing an issue that occures when you’re updating Roon (which results in the touchscreen to just keep on showing progress), this version adds an initial version for sending feedback.

You’ll find a simple ‘send feedback’ button on RoPieee’s webpage; hitting it will result in RoPieee send all kinds of log files etc. to me so I can analyse stuff. I’ve been wanting this for a long time

Anyways, would be cool if the people with the ‘shutting-down-and-booting-up-results-in-a-frozen-screen’ replay that scenario, and hit this cool button. Leaving a message over here that you’ve send feedback is enough.