Just installed Roon yesterday. Today my iPhone 11 running the Roon Remote App got warm and used 64% of my battery in a few hours. Is this a common problem with the remote?

Assuming you were using your iPhone as a a Roon endpoint at the time, I’d say yes. Seems about right, Roon does chew through the battery when used for playback.

This could be where I’m missing the boat! I assumed I was just using my iPhone 11 as a remote to control Roon? Roon is installed on my Mac Mini which flows into my Pro-Ject S2 Pre Box DAC and then into my Amp. Does this mean my iPhone is an endpoint? Or is the DAC an endpoint?
Is there a way to just use my iPhone as a remote and not use so much battery life?

Based on your description, you’re already using it simply as a remote. Was the app open for a long time? Seems unusually high battery usage either way.

Really need to know how long Roon was the active in use app. Given you’ve just installed it, maybe you were exploring for a long time and enjoying listening.

Thanks for quick reply! I was active about 2 hours of the 2hr45minutes it was open. My iPhone 11 is very easy on the battery and has never gotten drained until this happened. I didn’t think using it just as a remote could put such a hurting on the battery.
I’m only using Roon for Tidal MQA. If there was a way to control the Tidal App on my Mac Mini via my iPhone I wouldn’t even need Roon. I’m in a wheelchair so getting up to use the Mac Mini all the time is a no go.
I hope I’m making sense???

Yep, complete sense. I guess keep using and keep an eye on battery usage. Would be interesting to hear your experiences.
That’s definitely an expensive remote control! Still, may users here have similar use cases.
If you decided that MQA was not worth it over CD quality (my opinion) then you could just use airplay and the Tidal app on your phone.
Is your Mac mini hooked up to a TV?

If you installed Roon yesterday then you should be running the new version (Build 521). The Remote Control update for IPAD has not made it to the app store yet and guessing that would include Iphone so it would be running (Build 511).

Perhaps its an issue between the different releases that will be improved when 521 is available for the IPAD/IPHONE.

Just a though, may have nothing to do with it.

We haven’t previously tested battery usage regarding the Roon app, but it does seem quite high, so I would like to gather some more information from you if possible:

A post was split to a new topic: iPhone 12 Pro - Heating up when using Roon app

Yesterday, I launched Roon Remote on an iPad (gen 7).

Battery was 100% and still connected to charging.

I did a battery health test and it was normal.

Shouldn’t the battery remained charged to 100% when connected to a charger even with an app running?

Note: Charger and charging cable are retail and came with this specific iPad. 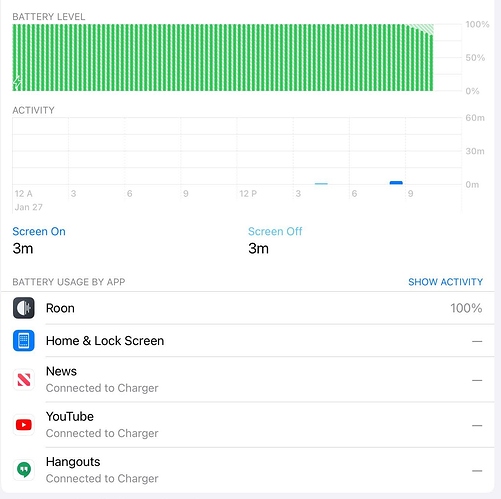 My iPad is always connected to a power supply. Even with extended listening sessions, the lowest that the battery has shown was 97%. 1st gen iPad Pro 12.9

Hmmm. I guess I will restore the iPad, reinstall apps and see if that helps.

When my Pixel 3 XL Android phone is connected to power, battery remains @ 100% when using Roon Remote.

Shouldn’t the battery remained charged to 100% when connected to a charger even with an app running?

Not necessarily since iOS manages battery health and so may suspend charging for a time to prevent degradation of the battery.

That said it does sound like the Roon app may drain the battery faster than expected in some circumstances.