Is food better without salt ?

Sometimes yes, sometimes no. That is why salt shakers exist.

DSP, whether room convolution, upsampling with apodizing filters in Roon or HQ Player or software MQA decoding, can be used for the purpose of higher fidelity reproduction of the original music by correcting room response, shifting noise or avoiding unnecessary processing and consequent noise in a DAC. Just as salt can be used to shift the balance of flavours back to some notional ideal after cooking.

So let’s go back to the original discussion: Lossless vs Enhanced for Roon signal path.

It’s been bugging me since I don’t have an MQA capable DAC for now to test myself: If Roon sends a bit perfect MQA track signal to a MQA fully capable DAC (MQA Core decoding is checked off), and the said DAC does full unfolding and rendering on hardware, will Roon signal path say Lossless or Enhanced?

I am not sure your question makes any sense. If the track is a non-MQA track, an MQA DAC will do no unfolding or rendering. How could it. The signal path with either be lossless or enhanced based on what would be if any other DAC were on the receiving end.

Never mind. Bad wording on my part. I edited it

OK, then it makes sense. Thanks!

It says LOSSLESS as you can see here. 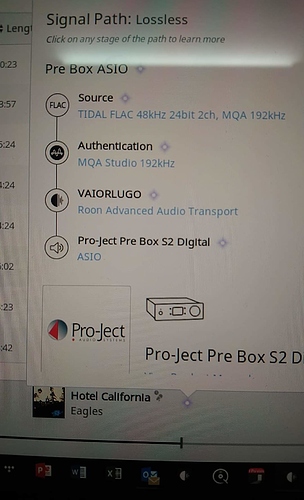 The signal path description appears to change according to the MQA capability of the DAC.

14 posts were merged into an existing topic: MQA disappointing

2 posts were split to a new topic: NOS DAC Equipment

Ehm… Gene, I’m not quite sure why you addressed your exposé to me.

Not that I don’t agree with most of whatever you say by the way because I do.

Just one thing: I used to respect Hans Beekhuyzen, until I started noticing a lot of similarities between some of his reviews and the marketing drivel about the products he was reviewing.

Hi Frank - I just wanted to generally join the conversation. Any idea how I can delete and (maybe) repost? Thanks. Too bad about Beekhuyzen. Perhaps I’ll edit before re-posting. Gene

No need to edit on my account. Just repost. You made some excellent points.

Setting aside the above, the notion of perfect playback is rendered meaningless by the fact that it is impossible to reproduce the dynamics of live classical music through any recorded medium (and would in any event both deafen you and alienate any neighbours you might have), while most pop music relies on electronic amplification (both for the singer and instruments) and often plenty of studio special effects to achieve the final mix so is inherently ‘distorted’.

The ONLY thing that matters is that the sound you hear when playing back recorded music through whatever medium and system you choose sounds ‘right’ to you. In my case that means produces a sound that is engaging and approximates to a relatively convincing impression of SOME live performances (large orchestral in full swing is always going to be an impossibility I would suggest).

As a analogy think of all those dull holiday snaps that failed to live up to your memories of delightful sunlit landscapes / vibrant townscapes and larger than life incidents. A great deal of Photoshopping is often needed to get anywhere near matching the sensations you actually experienced when there. Perceptions are NOT reality.

This is why most Quad amps (aimed fairly and squarely at a classical listening audience) have always had balance controls and filters. The fad for removing them remains just that, a fad. There is no justifiable reason to do so other than to removed poor quality components. But the idea that an amplifier without tone controls is inherently superior to one without them is, in either the pre- or post-analogue worlds, is I believe deeply flawed.

I’ve had many home stereo systems over the 40 plus years that I’ve been able to assemble my own; my current one is certainly not inexpensive (although by no means in the esoteric range). And I’ve listened to a wide range of music (although these days it is restricted mainly to 20th/21st century classical) a fair amount of it live. But replaying digital downloads (or music transferred from LPs or CDs) via a NAS, Roon Rendu and DAC, and taking full advantage of DSP (different settings for pop and classical and for headphone / preamp combinations or speakers) in a quiet and comfortable home environment gives me by far the most enjoyable rendition of recorded music that I can recall. And without doubt studio standard FLAC downloads offer me the best quality and tonal / timbral reproduction at present. But unfortunately many of the best performances on record are, as yet, unavailable in that medium and I also need DVD for the video component of ballets and operas.

Excuse my ignorance, where is these Lossless signal path & Enhanced Signal Path that appears you are able to change it ?