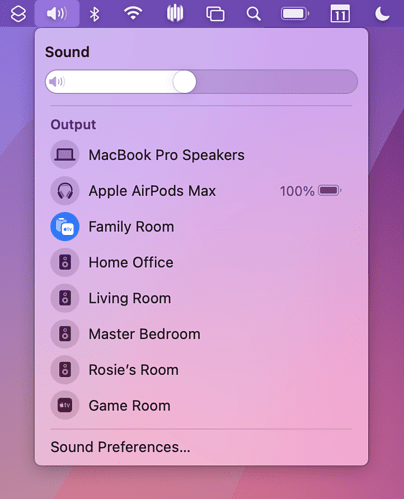 And even then – I’m not sure if supporting AirPlay 2 on the Mac would automatically offer support for the trickery Apple employs to marry two HomePods as a stereo pair. Outside of Apple Music – I haven’t seen it done in software yet (but I love to be educated if it is).

Thanks so much for this solution!

It’s not good solution. The sound is bad and it works with very limited capabilities.

Au contraire. It enables users to do what they could not do before: ship out audio from Roon to a stereo pair of HomePods.

The sound is bad

Compared to what? In my experience, there’s little (if any) difference between using them this way and using them from Apple Music directly. Sure: using Roon, the OS mixer (System Output) is in the path – but do you know what happens between AM en the HP?

True – but that’s what HomePods are: little speakers with limited capabilities. What we’re discussing here is the likelyhood of full support in Roon and the best ways to employ a pair of HP with Roon as is. Unsupported blanket statements rarely help the discourse.

[Note: moderators are not Roon staff, but volunteer users helping to weed this garden a bit. I do not (nor can) speak for Roon. Roon and HomePod user from the get-go.]

Why should a user pay for a feature to be developed they can never use without buying into another eco system.

Roon supports Devialet Air, do you need or use it? Thanks for paying that I (and many others) can

You’re welcome, I don’t have any Devialet, nor, Kef, Linn, etc but I have a choice to use them without changing my Roon core. Devialet Air is still cross platform and will work for any users with a core on Linux, Mac or Windows. That’s the big difference. I don’t use many of Roons features but that’s a personal choice not something forced on me because of my chosen Os.

I’ve got several HomePod Minis, including a stereo pair in one room. I’ve been disappointed by the experience using Roon with these. From Roon I can play to one HomePod Mini just fine, but not two at a time.

I tried the DSP filtering trick, but I couldn’t play to both HomePod Minis simultaneously.

I tried the system output trick, and that DID work. I can play from Roon to a MacOS or iOS device, then use AirPlay to cast system audio to my HomePod Mini Pair.

This is not a very satisfactory solution. It requires an extra device as a bridge when the HomePods are already on the network. This introduces a new point of failure and undermines the benefit of having a local music server. With this experience I may as well just use the TIDAL iOS app + Emby for my personal audio.

This is all pretty surprising to me given the homepage says:

Don’t worry if your gear doesn’t support a format. Roon makes sure that all your music plays everywhere.

Get the most out of every piece of audio gear in your home, from high-performance audiophile products to tabletop speakers.

Welp, I’m worried. Apple sold 4 million of these things in Q3 2021 and they’re expanding into more countries so it’s not exactly niche.

Shairport seems to be making some progress on AirPlay2 support, and OwnTone seems to have it as well. I recognize that Apple doesn’t make this easy; does Roon contribute to or support any of these open source efforts?

I hope Roon can provide quickly a solution in an update…

i, too, have given up on the “system output trick” because it only works for 1 stereo pair (while i have more HomePods) and also, importantly, because in practice it is impossible to enforce that default sound output on the Mac that runs Roon Core always goes to the HomePod pair. And Roon of course will happily play to “system output” even if that’s the Mac’s local speakers. So you have to wander over to your Mac, log in, change its default sound output to the HomePods, and hope it will stay that way for a bit. Very annoying - and very annoying that Roon forces me into workarounds like this.

That’s because it uses the system airplay and does not have specific code to handle it in software like Roon. Try Plex On Android, Windows or Linux you won’t get Airplay options at all. Roon supports Airplay across platforms as it doesn’t use system airplay or limit it to Apple hardware only it’s not they way they do stuff.

i sincerely hope Roon Labs take notice that their competition does what Roon Labs are too stubborn to do: use Apple’s official AirPlay 2 libraries when their software is running on a Mac. Alas, Roon Labs give no indication of listening to these forums, so who knows if they will ever adopt this pragmatic solution to address Roon’s obvious uncompetitiveness in AirPlay 2 support…

Why would Roon integrate a product, the Home Pod, that the manufacturer had discontinued, especially as they would have to pay for an API?

That seems to be the main use case of using Airplay 2. I cannot see why you would bother with the mini.

I understand that you may have spent a lot of money on a stereo pair of these products, but Roon never advertised that it was on the road map to my knowledge.

There are only 90 comments here on this thread, that doesn’t seem to indicate a lot of need amongst their core customer base. Now if Shairport were to offer Airplay 2, then I can see it being added as there wouldn’t be a lot of work involved.

If iTunes or Plex works, I would go with that. If you want to do Roon, I would suggest going with a product that supports RAAT.