I’m specifically referring to the Roon Zone setting that enables a Roon app to be used to change the volume of a given Roon “Zone”, aka Roon endpoint device.

I’ve got a Meitner Audio MA3 DAC that I’m in love with. But I would not have bought it if it were not Rood Ready. Too expensive. But it is, so I did.

When I use the Roon app on my iPad or iPhone, changing the DAC volume is a piece of cake. That is as long as the DAC is using Ethernet input. But I am distressed to have just learned that the same Roon volume changing functionality is not supported by Meitner Audio if the DAC is playing Roon input over USB.

So this begs my question…

Is the MA3 DAC really Roon Ready when it does not support “Device Volume” for Roon music coming to it via USB? By design, according to tech support at Meitner Audio.

As far as I understood, Roon Ready has always revolved around the network port (certifying the network endpoint software has been implemented correctly). Roon Tested is more about other connection methods like USB. I would assume that Roon Ready also includes Roon Tested as a subset, but, I’m not sure.

I hope that @john or someone else in Roon might be able to shed specific light on the topic.

While I do raise the question about personal concerns, I also think it raises important questions about what Roon Ready actually means, and where - or where not - device functional exceptions might be allowed.

Something to be documented for the Roon consuming community? What exactly are we buying when we buy “Roon Ready”?

Roon Ready network players from our partners have Roon’s high-resolution streaming technology built right in. They combine simple setup, daily reliability, and support for the highest level of digital audio performance in the industry.

Every Roon Ready player is certified by Roon to guarantee the same stellar experience, regardless of its manufacturer, its price, or its features.

While it doesn’t “specifically exclude” USB connection it does imply Network perhaps as a prerequisite.

Overview The Roon Ready program combines our RAAT technology with a comprehensive certification program, support infrastructure, and co-branding between Roon and device vendors in order to create the best experience possible for our users. ...

The RAAT technology is the backbone of the Roon Ready program. It offers technological benefits such as:

I don’t know, but the Naim streamers (not Uniti) are expected to be used with fixed volume on the streamer and via volume in the preamp, and they are Roon Ready.

(Though they do have an optional digital volume, it’s a token implementation to fulfill some certification requirements - and all I ever read was that it was to satisfy Apple, not Roon, though it’s certainly possible that this was incomplete information) 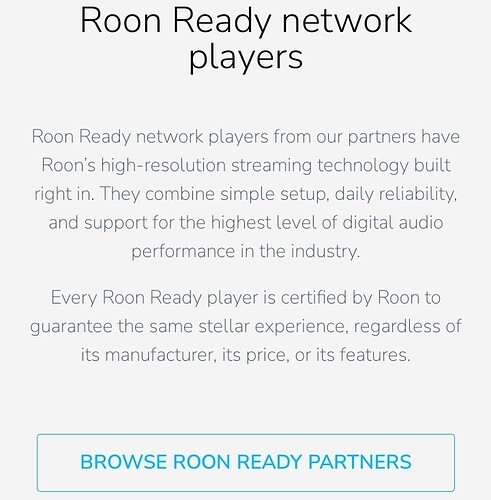 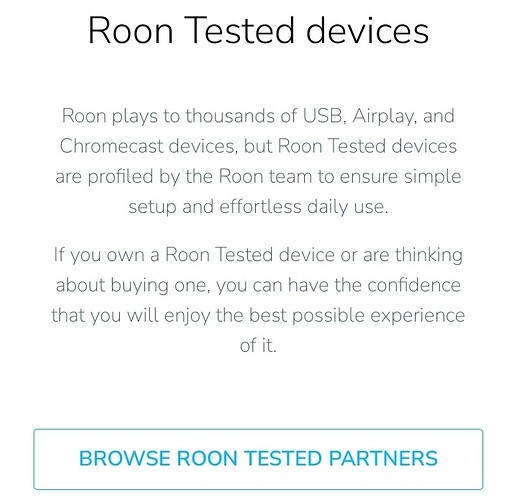 As long as it uses RAAT I think it’s then a collaboration between roon and manufacturer on abilities. Roon ready applies to devices with or without a DAC for example so it can’t be just one set of criteria.

I don’t know, but the Naim streamers (not Uniti) are expected to be used with fixed volume on the streamer and via volume in the preamp, and they are Roon Ready.

For instance, clearly not all endpoint devices do. Like said Naim streamer above (other than digital volume control, which does not count IMO).

Are you sure of that? Maybe Roon Ready network players may just be a subset of the larger set of Roon Ready devices, which might include USB.

Your logic seems sound, but I think a bit more clarity from Roon would be helpful.

Only mentions network in the description of certification

Overview The Roon Ready program combines our RAAT technology with a comprehensive certification program, support infrastructure, and co-branding between Roon and device vendors in order to create the best experience possible for our users. ...

Well, if USB is using RAAT, then I can say that having no Roon app volume control on my DAC when using USB input is definitely a worse experience than having that volume control when the DAC’s input is Ethernet.

So either I’m not understanding something, or the statement I just quoted was not done prior to the MA3’s certification.

I agree that some more clarity is preferable. It’s not always clear what Roon Ready means. Also, not every Roon Ready device supports every feature of the Roon Ready specification. Some parts are considered optional and are not mandatory to obtain certification.

USB always has limited control and is wholly dependant on if the DAC manufacturer has a preamp or allows another application to control volume via USB. Most do not and are a fixed volume out. Attenuating in the digital domain is not always wanted you cant attenuate a DAC stream for DSD or MQA as it will become non bit perfect. If it has a preamp out and this is known to Roon then it can control this as its after the D2A stage. AudioQuest Dragonflys allow control of Volume and is a Roon Tested DAC. But not all Roon Tested dacs have this functionality. Streamers more often are fixed or use some digital processing to attenuate to get Airplay certification this is the only reason its on Naim kit, but this degrades the output and they recommend fixed output and its not available to Roon unless you enable it in the streamer. Lumin etc have an advanced digital volume control.

As does Meitner Audio, and they implemented it in my MA3 DAC. But they have chosen not to use it when input is USB, though they do use if (with Roon) for every other input. What I don’t know is if that means my DAC is not really Roon Ready, or if that feature omission is permissible for something that’s called Roon Ready.

if you use USB it isn’t a Roon Ready connection its Roon Tested as Roon code isnt used on the device only the source device connected to it. If its via Network it is Roon Ready as the receiving device is using Roons code and transport mechanism internally. It does get confusing if a device can be used both ways. The Matrix DAC/Streamer can be used via USB or Network also. Forget RAAT as this does not designate Roon status its just a transport mechanism that happens to be used in both USB and Network scenarios to some degree.

if you use USB it isn’t a Roon Ready connection its Roon Tested as Roon code isnt used on the device only the source device connected to it.

So you are sticking to the thinking that Roon Ready does not apply to USB connections. I get it, and it’s been stated before in this thread. Though I don’t know that that has been explicitly stated by Roon. All the info I’ve seen thus has been less than 100% conclusive on this point.

I’m not disagreeing. I’m saying it would be better if Roon were explicit about this point. It’s a simple question… does Roon Ready only apply to network attached devices?

It’s a simple question… does Roon Ready only apply to network attached devices?

I think so based on this page saying “Roon Ready network players”:

Roon plays with everything Roon provides an amazing new way to experience your music. What it does with our partners’ products is magic. Learn more about our partner programs. Airplay Google Cast SONOS Roon Ready Mac iOS Android Windows HDMI USB Roon...

Its always been like that since I started using Roon 5 + years ago, never seen anything state USB has ever been Roon Ready.

Well, I’ve been around here longer than that, and that distinction is not one I was aware of, and would very much like to see it CLEARLY in writing.

I am sure someone will be along to clarify it all.

To answer your original question directly, Roon Ready functionality only extends to the networked streaming feature of the device.

If a device supports USB volume control (UAC 2 volume and/or USB HID volume), Roon will be able to control it by utilizing the OS’ audio device and HID drivers.

I took the time to write up a generalized overview of RAAT and how it relates to Local/USB playback versus Roon Ready devices. I hope it helps clear up some things:

RAAT is a protocol for getting lossless audio & related functions from point A to B over a network connection—with point A being the Roon Core audio engine and B being the endpoint device. The endpoint device runs a process that we’ll call RAAT-App. The RAAT-App takes the incoming stream from the Roon Core and forwards it to the desired audio device using the OS’ audio driver.

When the Roon Core is playing to a device running RAAT-App on the network, it sends the data over the LAN.

When the Roon Core itself has audio outputs it starts up RAAT-App in a separate process named “RAATServer”. The Roon Core then sends the data through the “localhost” loopback network interface (127.0.0.1) to the RAAT-App process.

RAAT-App relies on customizable plugins to interface with the OS’ drivers for audio output and other functionality.

The “RAATServer” process on Windows/Mac/Linux is simply our name for “RAAT-App” that includes plugins for WASAPI + ASIO on Windows, CoreAudio on macOS, and ALSA on Linux to enable playback to local audio devices. RAATServer also includes support for UAC 2 + USB HID volume controls on the aforementioned platforms.

The “RAAT-App” process running on a Roon Ready device includes plugins that are customized by the device manufacturer to optimally interface with the device and best leverage its capabilities. Roon Ready devices can include additional customized plugins to handle things like metadata, album artwork, and transport/playback controls.

To answer your original question directly, Roon Ready functionality only extends to the networked streaming feature of the device.

Thank you John, that is the clarification that I was looking for. I would like to point out that - unless my memory is incorrect - that is a change to the original state of affairs. Or am I mistaken…

When Roon was first released, there were few things on the market that could even get to digital music over a network except a PC or Mac. There were exceptions (which I used), but that was generally the case. As such, almost all DACs had USB input to them, to play music from Roon on a PC or Mac. And were those DACs originally not designated as “Roon Ready”?

Or has the designation always applied only to network attached devices, and I just missed that distinction?