Is there a well-designed fanless NUC enclosure out there?

are you Larry, it’s uncanny that you posted your remark just when I received my HDPlex

No I’m not Larry…no idea who that is either. But nice idea.

No I’m not Larry…no idea who that is either. But nice idea.

as long as it’s for personal use, or one of the fair use cases, it’s fine by us

Thanks @danny, I am building a low power fan less HDPlex H5 https://www.hdplex.com server for personal use with Roon (among other things), Larry gives you the option of having the logo of your choice machined into the brushed aluminium power button, for a small additional fee. I HAD to go with the Roon logo as that will be its primary use.

Just for fun I am going to try to run ROCK on it to begin with.

This will give you a better idea of its size and what the finished unit will look like.

Damn, I have just noticed that the grain direction of the button doesn’t match the faceplate. I don’t think it will be an issue for Larry to sort out.

Innuos is capable of running also Roon Server. There are some limitations of course, that are all mentioned here:
http://www.innuos.com/en/go/installing-roon

innuOS Servers currently use Intel Quad-Core CPUs which are powerful enough for music server duties whilst maintaining the system fanless and limiting the amount of power-noise polluting the audio system. The main task requiring very heavy computational requirements is the DSP processing within Roon. With the current hardware, upsampling CD-Quality files to DSD128 and DSD256 will not work properly. Upsampling CD-Quality files to DSD64 works when this DSP setting is being used stand-alone, as well as upsampling to PCM 384KHz. Combination of DSP settings which require more computational power than currently present will result in stuttering music.

If you plan to use DSP on Roon heavily, we suggest to install Roon as scenario 3, using the innuOS server as a Roon player only and using a powerful PC (Windows/Mac) as the Roon Core server.

Roon requires at least an i3 for optimal performance. You can run it on a slower processor but the user interface will be slower especially as you add more tracks. This can be a real problem when you use Tidal. It’s very easy to add 10K+ tracks to your collection with Tidal and this would not work well on a slow processor.

But a J1800 should be fine for a few thousand tracks or so.

I’m sure you know more about this than I do.

Anyway, it would be even better if someone from Roon team could comment more on this. I get a feeling that you just want to sell a sonicTransporter for me

Brian spelt it out in a post more than two years ago, and there’s plenty more on hardware requirements in the Roon KB.

Actually I emailed Larry many moons ago (2010) about cases he was building back then…things have come a long way…now I know who he is again.

But the HDPlex cases are not NUC compatible.

Yes it’s a shame that his cases aren’t NUC compatible, if they were I think they would be a great fanless case for ROCK, especially the smaller range.

I have about 1300 albums and using only convolution (not upsampling), so I suppose something modest would work? Is there anything more specific information available on what does @brian mean about “very modest piece of hardware”? Would Innuos work?

With a small 1500 album library and a headless use case on a dedicated device, a very modest piece of hardware will run Roon really well.

I am currently running Roon Server on i7-6700K, multiple GPUs, SSDs etc and it works nicely. Roon takes only about 1-3% of the CPU power even when using upsampling and convolution in the same time, so I don’t need this much power. I would like to have a fanless solution.

I think you’d probably be OK with an Innuos with that size of library, but if you’re confident about DIY, you could build your own ROCK-based solution using the motherboard from an Intel NUC transplanted into an Akasa fanless enclosure. I’ve done this for my Roon server, and am very pleased with the result.

The transplant operation went well, I think. The NUC7i5BNH motherboard is now in the Akasa Newton S7 case. It all seemed straightforward. I used the thermal transfer pads supplied in the Akasa kit - in the video that Marius posted, the guy said that he eventually used thermal paste for better heat transfer properties. That may well be more efficient. The CPU in my Akasa is running warm @ 50 degrees C, but it’s well within operational limits I believe, so I will probably keep it this way. I us…

I used the i7 NUC but its slight overload for the Akasa Plato X case…tho the i5 is fine.

but that said I would guess the i5 NUC would be fine with no DSD upsampling and it probably doesnt even need to go in a fanless chassis.

what does you existing rig indicate for performance speed now?

Seems to be plenty of headroom at the moment… 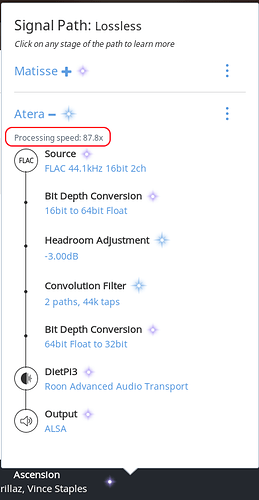 An i5 won’t necessarily do 512 but it will do DSD without too much difficulty.

What I meant was that with convolution and DSD it might struggle…as all the DSP functions will comprise of additional load to any setup. Only trial and error will find the tipping point…but such additional loads will put heat demands into play and will ramp up fan speeds or cooling requirements when such higher demands are needed. Adding and analyzing new music for example is a big cpu load, albeit a transitory one.

An i5 won’t necessarily do 512 but it will do DSD without too much difficulty.

But is a Quad core the best option when using Roon with no HQPlayer? If Roon uses a single core to run normally after analysis then one virtual core of an i7 NUC is more powerful than a single virtual core of a quad core chip. If you employ the parallelize function in Roon, if it only engages another core you are still potentially better of with the NUC i7. It is quite possible Roon isn’t optimised for the additional cores the same way HQP might be. I may be wrong but that is my impression.

Yes, although, don’t forget that Roon will dedicate a core for each simultaneous audio stream.

But is a Quad core the best option when using Roon with no HQPlayer? If Roon uses a single core to run normally after analysis then one virtual core of an i7 NUC is more powerful than a single virtual core of a quad core chip. If you employ the parallelize function in Roon, if it only engages another core you are still potentially better of with the NUC i7. It is quite possible Roon isn’t optimised for the additional cores the same way HQP might be. I may be wrong but that is my impression.

I have watched the load monitor on our sonicTransporter i7 and I can verify that, with parallelize enabled, Roon is using all 8 virtual cores effectively when upsampling to DSD512. Without parallelize enabled you peg one core and get dropouts.

Roon uses about 50% CPU load for upsampling to DSD512.

ROCK installed on an ASUS ROG STRIX H270I motherboard with an Intel Core i7 7700, Samsung 960 EVO 250GB M.2 SSD and 8 GB Corsair Vengeance Ram and a 1TB Samsung 850 EVO SSD. [IMG_0403] Seems to be running beautifully, took most of the day to get everything running properly. Restored from my backup twice as somehow a lot of my metadata grooming disappeared. Even on the second attempt it was the same. PITA. Quite a few album merges had split and one album was showing as another artist entirely a…

I had an email exchange about just that with Larry recently. He’s looking into what it’d take and if it’d make sense for him.

If it pans out, which is a big if, there’d be the added bonus that even the smaller case might be able to house a 3,5" drive (and of course could take the thicker, 4TB, 2,5" drives) - assuming it’d be possible to properly power and decouple that, you’d have an essentially silent, powerful small box with up to 12 or 14TB of storage (not that that much storage is the best idea in the world without ECC or redundancy). It’d of course be bigger than Nucleus, and building into HDPlex cases is well into the “nerdy neighbourhood kid” side of the difficulty spectrum, but it could make for a well-finished, nice looking, and properly cooled DIY option (Larry’s smaller case is specced for 65W, the Nuc7i7 is 28w if I’m not mistaken, and that’s officially too much for an Akasa case