I played some tracks and they did not show up with MQA processing: 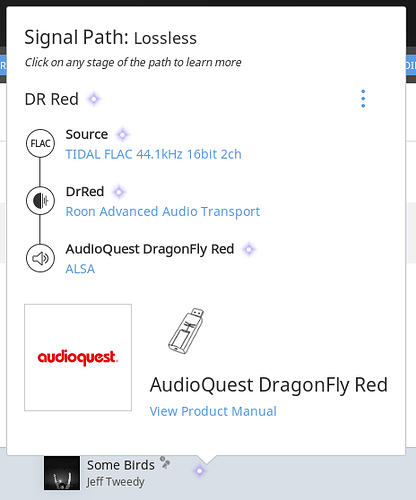 I played some tracks from his Together At Last album from 2017 and it is MQA.

Thanks for posting about this album, added both to my library. Radio play after this album is playing some artists new to me that I like very much.

Just a note, that storage cost at streaming companies are trivial to their bottom line, and that MQA requires more storage/bandwidth then the equivalent 16/44

It is a good Album in MQA or not.

I have no particular knowledge of any streaming providers costs for anything in their environment but I suspect that however small the incremental cost to store process / stream anything it works out to real money when multiplied by 40 or 50 million.

I understand that MQA’s requirements are more than CD quality but I’m also assuming replacing CD quality with MQA might result in more streaming of the less than CD version.

Bottom line … I don’t know why this album showed up as MQA and not CD although it seems it may be CD after all.

Yep… it looks to be mis-labelled. It says it’s MQA, but plays as a regular flac on mine. 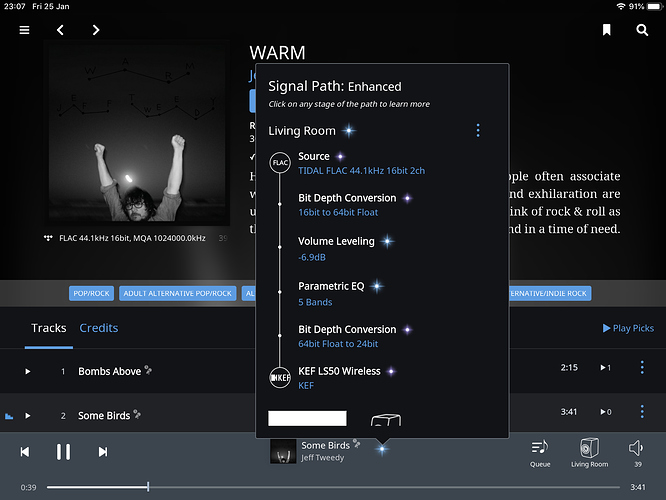 Thanks for the report, I had the tech team take a look at this.

As far as we are aware, albums from the label ‘2L’ have been uploaded to the Qobuz service using MQA encoding. While the format display issue on album details is a known issue , these tracks do appear to be valid MQA, and Signal Path is properly identifying this and showing the unfolding of the content as expected. We are going to follow up with Qobuz to confirm our findings.

Then there’s this. Mqa has infected Qobuz, too. Sad.

Also, check out the mqa resolution on this.

This definitely got @Chrislayeruk frothing at the mouth

I’m in Canada if that is causing the apparent difference in resolution options???

Tim - if you aren’t familiar with his Wilco music I’d recommend listening. One of my fave bands.

If I encounter an album that is MQA exclusively, I do a search of the same album and it will show up two versions and one is CD 16/44.1. It happens all the times.

Troubling. Maybe the labels are pushing it for future drm

I’ve always had a fear about what could be the long game as far as MQA goes.

Roon should fear this too. Roon, apart from streaming, is irrelevant if one can’t rip to disk.

On the other hand, the argument is that streaming is the future and only dinosaurs have their own libraries.

Good point, however I have found certain albums that do not have a second 16/44 hiding behind a search. At first I would even try to find them in the Tidal app because I have at times found albums in that app that are hidden to Roon.

Just got home from a live performance by John Kilzer at a coffee house. Will play some Wilco tomorrow.

Thanks for the suggestion … Tim

Mainly from 2L label at the moment, probably they gave the wrong copies to Qobuz. I guessed Qobuz will be furious as their stands are lossless streaming. Besides to stream MQA, the streaming provider must get a license from MQA Ltd.

All good points. Does the Qobuz team know they are streaming MQA most likely without a license?

I haven’t noticed any lack of CD alternatives on Tidal.

Seriously, when I get back to the keyboard I can point out a few for you…

Yankee Foxtrot is one of all time favourites!

But they should be checking the provenance of what they receive. Makes a mockery of their QC doesn’t it

On the other hand perhaps it’s MQA and Bob S. who have made a mockery of the trust relationships inside the industry.