I only have 1TB/month which seems like a lot but isn’t with Netflix, security cameras, IoT devices, numerous phones and tablets, oh my. My ISP will allow higher data rates but all with the same data cap. One can pay $30/month for 150GB additional that doesn’t roll over, or $50/month additional for unlimited. This is on top of the base 100Mbps at $85/month. Overage is charged at $10 per 10GB over the cap.

WTF is happening there over the pond!? (US presumably?) High prices and capped usage?
I take your point about wishing to select quality, but if you listen to a few High-Res albums via Qobuz per month, 1TB ain’t gonna last you long.
Is there any chance you could get a better internet deal?

Yes, SoCal USA. That’s the cap nearly everyone with a home/consumer internet connection gets. My ISP has raised the data rate 2 or 3 times now over the years for no additional $ but the cap remains the same.

Wow. We’re in the San Diego and we pay Spectrum $82/mo for 300 Mbps. That’s internet only. I don’t know what the cap is but we’ve never hit it and we watch a lot of streaming. Are you in a rural area?

I’m with a company called Virgin Media here in UK.
We have fibre internet only, no TV, no telephone line etc, and pay £45 p/m for a completely uncapped, 200mbs connection.
TBH, I don’t know how we’d manage without it. A decent internet connection is now as important as running water in this household (Yes, ‘first-world’ problem, I know!)
I’ve lost count of the number of devices in this house that use this connection. But the main thing, from my perspective, is that Roon works perfectly

Nope, Vista with Cox communications. Good to know the price is effectively the same, I don’t need more Mbps. I bet you find there are few sources that can/will deliver data at more than 100Mbps and even if they could it wouldn’t really matter except for file transfers.

For others, Cox and Spectrum are cable TV providers and long ago staked out their respective territories. There is typically only one cable (coax) provider for TV in any given area. AT&T using old copper twisted pair and satellite providers like DirecTV are alternatives but not great ones.

BT Fibre to cabinet wired to house. 30mbs seems to work fine for Roon and everything else we do. I don’t stream internet TV though. No point for me.

I’m a Comcast / Xfinity user in Memphis TN and I definitely have a data cap. See my usage graph: 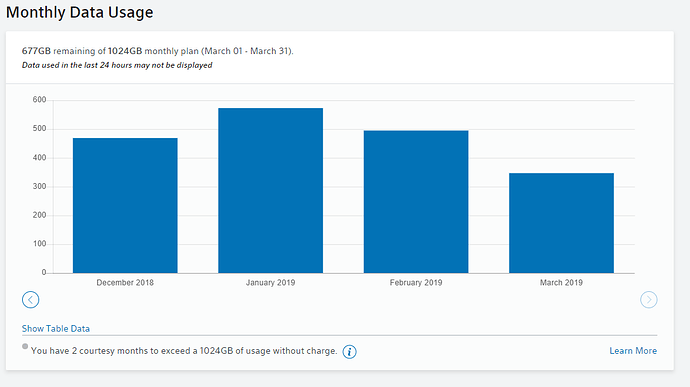 I’m sure the competition in Chicago is much stronger than it is in Memphis. Not too much competition here. Cost is $80 per month for 150 down / 12 up.

I imagine I exceed that regularly with streaming. But that call was a long time ago. They sell the lifestyle…they have to support it. At least you’re not on satellite!

well, what do they call this cap of theirs?

I certainly made that point

Yeah, Spectrum in upstate NY charges $60 a month for Internet only (no cap, as yet) 100 Mbps. The NY legislature finally did something for the people and won’t allow (as yet) data capping.

I noticed Europe and Asia consumers pay much less for full boat service. Amerika is higher because the ISPs can get away with it.

Still, fiber from another provider is soon to be coming to my neighborhood, faster and cheaper. Funny, ISP is offering fiber just when 5G is the future. Typical.

Singapore here… we pay about US$50 a month 1Gbps down and 600Mbps up tho its usually better than 600Mbps up fibre connection…but better offers are around all the time like US$35 now for similar rates on other ISP if you dont care about VPN’s and using your own routers etc. many with 6 months free on a 2 year contract.

Oh and no data caps or rate caps. 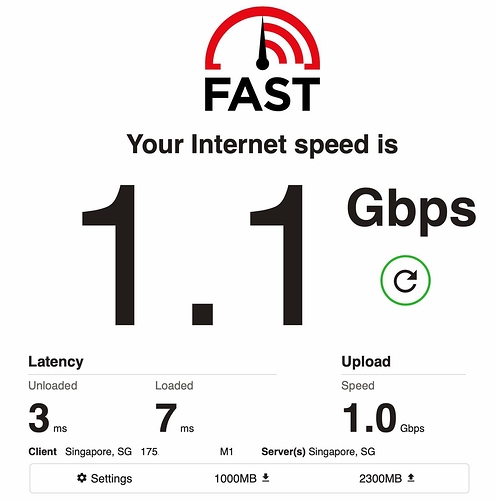 Remember about 7 years ago was with BT here in the England, Capped at 40Gb. Went over the limit and got a nasty email telling me they could have charged me so much per Gigabit for going over so do not do it again. You would have thought that I committed mass murder instead of going over the internet limit.

Ironically I moved shortly after that just around the corner virtually. Was without the internet for 5 Months as BT tried unsuccessfully to connect a line in my new property. Moved over to TalkTalk ( £31 per month for 75mbs ) and not looked back.

Funny how BT have the audacity to call that a fiber product, when in fact you’re on ASDL from the junction to the house. Have the same here and get same speed.

Yes, it’s fibre but not as we know it… I remember Dial Up though…

I remember it too… 56k modem with that horrible handshake screech back in the 90s. iiNet in Oz was my ISP from 97 though 08. How the world has changed, but we’re on ADSL while many are luck enough to have FTTC. The big downside of copper line is lightning. I’ve lived in my current place since Feb last year and already lost a BT router. Luckily my kit survived.

Reference the BT router, I was talking to a chap whilst at a school mentoring event and he has recently left BT. I commented on how much better the Wi-Fi coverage is compared to my previous BT router.
He told me of the battle he had with marketing to get this one through (It initially looks an odd shape) but care had been taken with antenna positioning to optimise performance. Luckily performance won over style.
It’s strange the people you meet…

Even I darkest Africa we aren’t too bad

This is a good deal with a smaller ISP, Vodacom have the audacity to charge about 2.5 times, Telekom the state telcom. Provider about 2 x