John Cena (WWE wrestler) is NOT in Iron Maiden! [Correction Made]

I just noticed him in my collection as a featured artist in the overview page, and in a “WTF WWE” moment, I wanted to see where he makes an appearance I otherwise had no idea about… turns out Iron Maiden’s “Virtual XI” has incorrect Primary Artist links, and this is resulting in weirdness all round: 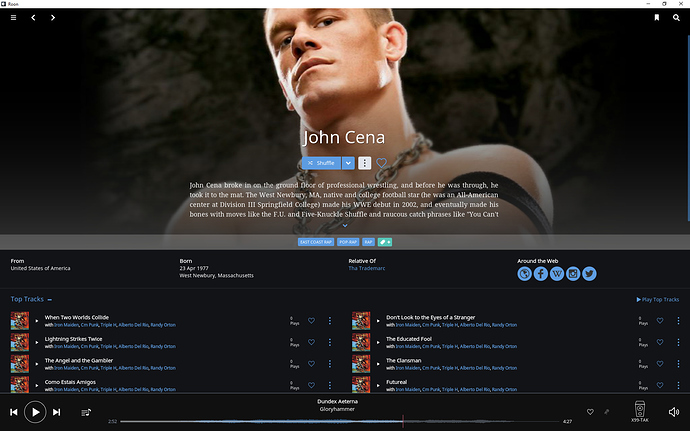 I’ve corrected this in Roon, but wanted to let someone know if this can get fixed wherever it needs to be…

Hey @alex_london — Thanks for reporting this to us!

I just wanted to reach out and let you know that we are looking into this. I’ll be sure to report back once I have an update on the team’s findings.

TiVo has let us know that they have corrected this today. Please give this about a week to be reflected within Roon. Once you see the change on your end please mark this post as the solution.

Thanks for the update. Since I’ve already manually fixed the tags on my side, I’m not sure how to check the change has been applied… If I re-identify the album (to get the incorrect artists again), will Roon then automatically re-update this after it has been changed in TiVo (or whichever other service is being used)?

I thought album identification and tagging happens only once when it is added to Roon?

This is not corrected… The Iron Maiden album Virtual XI should not display credits from wrestlers?

Our metadata provider confirmed that this had been corrected and, looking on our side, things appear to be correct here.

Was this a recent import, or something that’s been in your library for a while? Have you previously edited this album (which may prevent updates from being applied)? If you re-import this album do you see the same artists?

No, it was a while since this was imported. It has not been played for a long time though. I couldn’t find the wrestlers names under primary artist yesterday, and i chose “Prefer file” from albumartist under Prefer Metadata. That caused the names to disappear and only refer Iron Maiden.
Now i tried re-identifying the album, but the wrestlers names does not seem to come back.
So, probably you are right, this was old metadata, corrected now.