The generic entry and description of John Williams the classical guitarist is wrong. The picture is of someone playing a steel string guitar and looks nothing like John Williams. The link in the description is also wrong and has previously been mentioned here (John Williams (guitarist) confused with John Williams (conductor)) in 2015. So clearly not much happening with updating this entry.

in my library, the description is correct, photo is correct (but awful), links are correct.

clearly not much happening with updating this entry.

The equivalence for John Williams has been fixed for a long time. However, there are two other things going on here:

First, we don’t currently update images once they are in your library; this is something that we want to change, but, for the moment, the best thing to do is to edit the image yourself. There are plenty of good images, such as:

If you need assistance with an artist image edit, @ivan can help.

Second, you’re correct that the John Williams link in the bio points to the movie composer. IMO, there shouldn’t be a link there at all as it’s pretty pointless. This is the first time that anyone’s noticed; I’ll get this changed. Thanks for bringing it to our attention.

@Niccolo_Terzi I agree that the current main image is poor. I will also see what we can do here.

I get the same picture as the OP. I don’t remember searching for John Williams before. 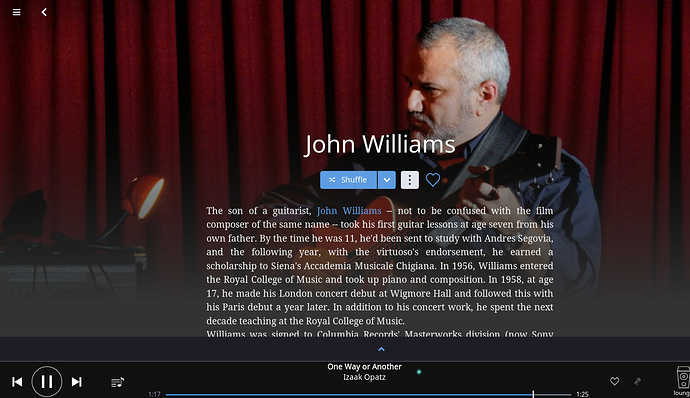 Hi @eclectic. That image stems from the time when there was a false equivalence. Apologies for the inconvenience.

@joel No problem to me, I went off John Williams when he inflicted Sky on us. I just looked him up on Roon half an hour ago when I read this thread.

Actually the guy in the photo looks more like John Martyn. I’m not sure it’s him though.

@Niccolo_Terzi I agree that the current main image is poor. I will also see what we can do here.

Hi @joel
my comment actually was a provocation. the problem is not John Williams… i think that it’s a general problem. most of the pictures are quite poor.
this could not be a problem, if it was easier for us (users) to put “our own” pictures, if the limits for a large background picture were easier to fulfill, if it was possible to chose a focus area (forehead problem), and so on…

in general, an artist picture could be even poor, but should be present (see composers area, which results in 80% of awful grey boxes), while in the artists area i can chose and change the pictures (actually i did it for most of them)

… but this is quite offtopic

… but this is quite offtopic

Perhaps, but I appreciate your input.

Was this equivalence ever fixed? I am also not getting the classical guitarist but the blues guitarist.

As I posted earlier:

The equivalence for John Williams has been fixed for a long time. However, there are two other things going on here:

First, we don’t currently update images once they are in your library; this is something that we want to change, but, for the moment, the best thing to do is to edit the image yourself. There are plenty of good images, such as:

On the bio, I believe that TiVo updated this.

Thank’s @joel. I can confirm the bio is changed but not the pic.

I have another question related to this. Transcriptions from lute, piano, cello, viola, clarinet, even orchestra are extremely common in the classical guitar repertoire. With single part works roon let’s me add “guitar transcription” so I can distinguish variations in compositions but still have them grouped as a single composition. To do this I must tag WORK exactly the same as the composition in allmusic but in TITLE I can put pretty much what I like. So in this John Williams & Julian Bream album I can tag all the famous Debussy piano works as “transcriptions for two guitars”. 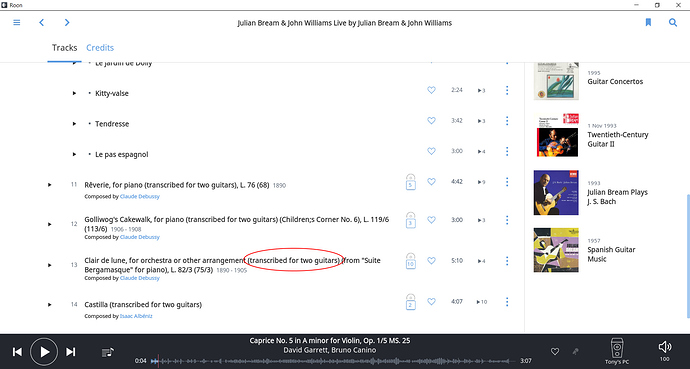 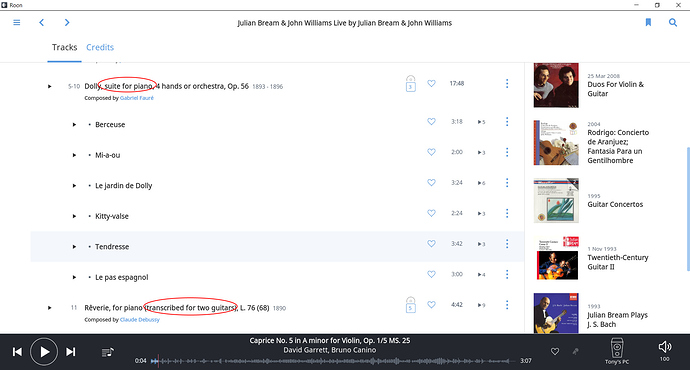 However, I cannot do this for multi-part works

Hi Tony. Unfortunately, I’m pretty sure this is not possible at this time. The reason you can do it for performances of single-part compositions is that Roon uses the title for display purposes (so you are not actually editing the name of the composition itself). IIRC, the reason for doing this is to cope with excerpt performances (of single and multi-part compositions) where the additional information on the track title is important to provide context.

In general, where we have a multi-part composition in Roon metadata, the performance is complete, so Roon uses the name of the composition itself; but we are limited to the composition granularity determined by our metadata providers; typically, there is only one canonical “composition”, even though there are clearly different transcription variants.

I’m not saying that our current treatment is ideal, right, or wrong, but that’s how it is…for now. This is quite a murky area for us, because composition/part editing is being used far more than we anticipated and somewhat at the edges of the design spec.

Thanks for the explanation but I am not sure about this assumption:

In general, where we have a multi-part composition in Roon metadata, the performance is complete

It’s true of course for more “academic” recordings but I have an absolute ton of live and more “recital” based recordings and box-sets where that is just not the case. Multi-part excerpts are extremely common. I will rarely listen to a complete opera or ballet for example and much prefer “highlights” or “suite” recordings with all the recetitive removed (another example where it would be nice to be able to put an indication in the title of the multi-part work like “highlights”)

I would say that multi-part excerpts are at least as common, maybe more common than single part excerpts. I don’t know what others do, but for example where the album has 3 or 5 preludes or etudes of a 12 or 24 series, I just group them together as a sort of multi-part excerpt. I do this all over the place. Another common case is gala performances and concert arias. Where the tracks are grouped by opera on the album I also make a multi-part “excerpt” of the opera in order to get a composition ID and simplify the screen presentation.

I do this for several reasons:

I can imagine the general area being complex with a lot of considerations. But maybe this is a much narrower case? It just seems to boil down to being able to edit the title for both the single part and multi part cases.

Understood, though my comment is probably still correct for the most part.

i.e. Complete multi-part compositions as defined by our metadata providers. You, of course, may beg to differ locally.

This is good positive discussion.

Just to keep the themes of this off-topic, topic together

, there is another class of multi-part excerpts that rovi does consider canonically complete. For example “suites” (usually of complete ballets but also of other types of lengthy work) are canonically different from the parent work:

Similarly, orchestrations can be canonically different from the parent piano work. Rovi appears to be maintaining at least 3 canonically separate versions of “Pictures at an Exhibition”, for example.

I find several problems with these types of work.

Are there any plans to address at least some of these issues? I appreciate it is highly complex. My primary motivation is not actually the library management. That is just a means to an end. It is more the listening experience. I like to group all my “covers” and “interpretations” so I can create playlists of little played versions and rarities I wouldn’t otherwise know I had without roon.

We really appreciate your putting all of this down on “paper” Tony. Our goal is a truly first class experience with Classical music. There will be improvements, but I can’t say when these will happen.

Ok. One last thing and then I’ll stop. I notice the instrumentation is often wrong on these “derivative” works and transcriptions. Unfortunately that is the only composition field that cannot be edited. This is a typical example which also comes from the same John Williams album where there is also a guitar transcription of Brahms own piano transcription of his string sextet op. 18.

The reason I raise the issue is that I am often surprised how quickly roon wanders off at a tangent in radio if I seed with a classical guitar track. I often get unexpected acoustic blues (and other pop) but even if it does stay on classical it doesn’t stay close enough for me to the period, form and instrumentation of the seed track. It’s almost as if associations are bleeding through into unrelated areas because tags have been set that I cannot edit.