When CD came out a bunch of old-timers kept their heads in the sand and were adamant that vinyl was better.

When playing back music from a local hard drive came out a bunch of old-timers kept their heads in the sand and were adamant that CD was better.

When streaming music online came out a bunch of old-timers kept their heads in the sand and were adamant that local playback was better.

Last week vinyl sales outpaced CD sales. Both were utterly negligible compared to streams. There’s probably a market to sell something to old guys with sand in their ears.

If you’d ever been on his forum, as I have, you would also realize that.

Don’t know him or his product well enough to make such a personal assessment of him but I tried JRiver around the period I first trialled Roon and I just found it an impenetrable mess to a noob despite being reasonably computer literate. Roon on the other hand did what I tried it for within a few moments of loading it, which was to send native DSD to a USB connected DAC. Roons other charms seduced me later while JRiver never got a second chance. But I’m probably not his target user as I’ve had streaming accounts for a good few years.

I used it for awhile. It remains an impenetrable mess, especially if one goes away for awhile (e.g. to use Roon or Plex) and then comes back to it.

I once suggested that they spiff up their WiKi to make it more intelligible and I was threatened with being banned if I kept complaining. So, there’s that.

Interesting , I’m a total JRiver fan, have been for many many years. I just bought some new music, I use JRiver to RIP all new music, Tag it, Rate it, set CoverArt, combine or separate multiple albums and in general make any adjustments. Once it’s all tuned up, then I move it over to Roon.

So let’s say JRiver added Streaming functionality, what would you expect that interface to look like, just select and play music from multiple sources or would the JRiver dev team have to build in all the music association features that Roon has to compete?

From my reading of the Roon Forums, there are tons of bugs trying to get it working in Roon, I think I would stay away from that disaster waiting to happen too.

I’d be happy of JRiver just adds more cool features related to Music and Roon fixes all the playback bugs and improves the interface, as I currently like Music discovery better in the Tidal and Qobuz apps, just try to play a couple of songs for 25 or so albums from the New Music lists in Roon via Tidal or Qobuz apps. Now if Roon would allow you to use the arrow keys to move from Album to Album, once you’ve selected an album from the new music instead of continually making you drill down into and back out from each album, I’d be a happy camper

which was to send native DSD to a USB connected DAC

Then you joined in mid / late 2016. Roon did not launch with DSD capability.

Now if Roon would allow you to use the arrow keys to move from Album to Album, once you’ve selected an album from the new music instead of continually making you drill down into and back out from each album, I’d be a happy camper

You don’t need to do it this way. It’s perfectly possible to select multiple albums at the overview level, and add them all to your library at once… 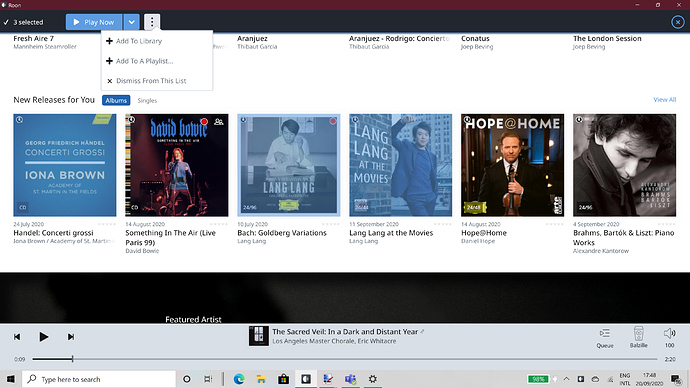 i’m sympathetic. i have no use for streaming music services.

Thanks for the suggestion, but I may have not described what I meant, so goto Qobuz via Roon menu, choose New Releases , View All, you’ll get approx 300+ albums, now to see if you really like an album, you have to listen to it, but you can start by filtering out Genres you don’t like, Not with Roon, you have to drill down into each one, read, maybe play, then back out and go to the next one. 3 or 4 days later you may get through the list.

Next goto the Qobuz App, Discover -> See all New Releases -> you’ll get a similar display of several hundred albums, but now you can either pre-select or de-select genre’s prior to this selection and filter out albums your not interested in, then you can hover your mouse over each album and see it’s Genre, and if your interested click the Play button, no need to drill down, and if you are not happy, hover over the next album and try that one, you can go through that list quite quickly looking for music that sparks your interest, save it and play it all later.

Sorry but Roon has alot of work to do to make Discovery easier, thus at least if you could drill down to an album, and then use the right or left arrows to move between albums it would be alot more efficient
Roon - you must drill down into an album to get more details and genre: 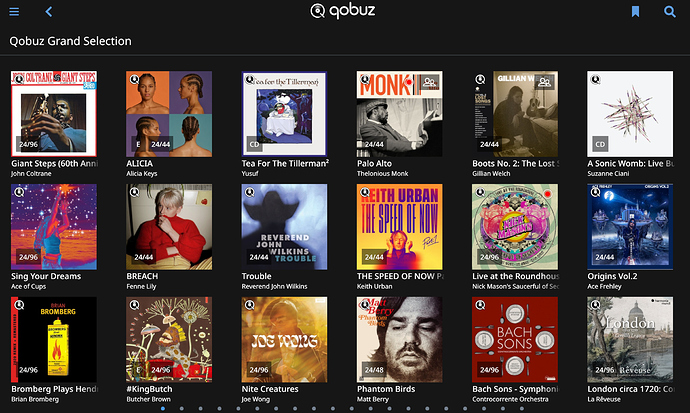 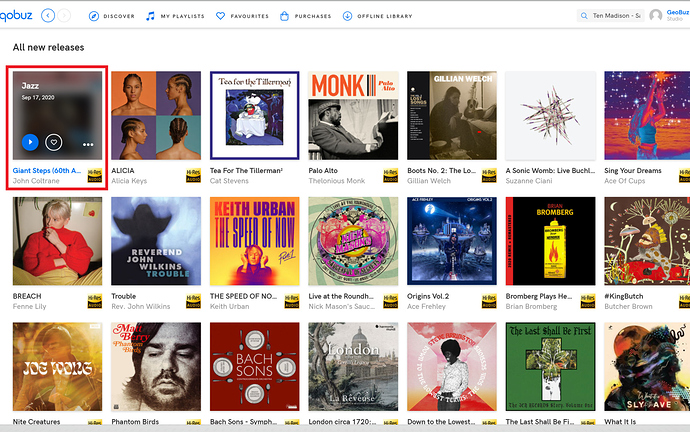 Here’s an example of what I meant by the arrow keys, in Roon, once you drill down into an album, if you don’t like it and want to look at the next, if you allowed the arrow keys to move left and right, so from here:

image2206×1082 365 KB
now hit Right Arrow and you would get the next album and could see all the details and play it if desired: 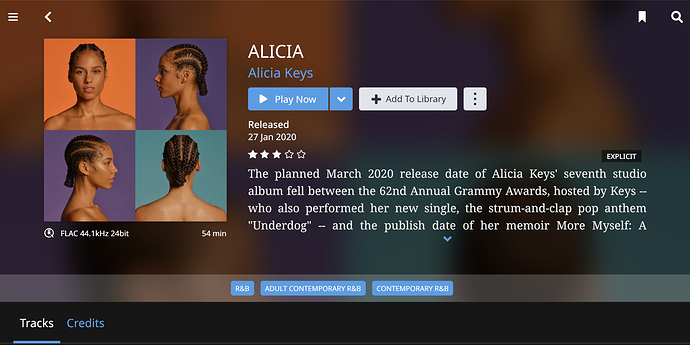 OK, thanks for explaining your use case - this is really helpful. You might want to post this in the Feature Requests category, where it will be seen by the Roon Labs team.

Ok, I’ll do that, as I spend a lot of time looking for new music, a few minor adjustments would be very helpful, as to me Roon is all about music discovery.

If I may jump in here for a bit. This would also be super handy if you could use it by scrolling through a discography.

Suppose I am playing a Led Zeppelin album or another band with a large amounts of albums. When I want to check out some other album from the same band, I have to scroll all the way down the list of albums on the right side.

It would be much easier if we had well placed hover over arrows, left and right, so we could scroll through the available albums. With five clicks we would be five albums further.

as requested, I copied at and opened it as a topic in Feature Requests.

Please consider making Discovery easier by reducing the number of key strokes and clicks to explore Tidal and Qubuz. I use the Cntl-Left Arrow or Cntl-Right Arrow keys to maneuver around Roon, but when viewing New Music from Tidal or Qobuz, you can encounter 300+ albums, trying to explore more than a few albums becomes almost impossible via Roon compared to the same in the native Qobuz Apps, if you could drill down to an album, and then use the right or left arrows to move between albums it …

You could add your request to that one if you’d like.

I did my first trial back then. I think in the 1.2 days. I actually joined just as 1.3 was launched.

I didn’t say that

15 posts were split to a new topic: Composition view problems in Roon

Typical Jim H. Indeed! So glad I left JR for a real player like Roon! No comparison!

Interesting , I’m a total JRiver fan, have been for many many years. I just bought some new music, I use JRiver to RIP all new music, Tag it, Rate it, set CoverArt, combine or separate multiple albums and in general make any adjustments. Once it’s all tuned up, then I move it over to Roon.

That is exactly the way I am using it. For me Roon IS the streaming extension of JRiver.

Though JRiver equals Roon’s sound quality I use Roon for daily listening to my music and for discovering music on Tidal and Quobuz. If there is a brilliant new album, I download it from Qobuz, integrate it wirh the mighty means of JRiver into my collection and playback it with Roon. In Roon/Qobuz/Tidal new discoveries are only few clicks away.

I recall requesting that a couple of years or so back. Like so many quite simple feature requests, it sank without trace.
I still want it so I am glad you saw the need independently!
One day, one day …