Kate Bush 2018 remasters Show up as the second Tidal version in Roon but come up as not available when I click on them.

Is this a location restriction?
If so can it be bypassed by a VPN, or is your location based on where you were (saying you were) when you joined Tidal?

I tried USA-VPN but it still would not play.

It does not show up for me at all on the Tidal app all so therefore is this a Roon issue?

Same here. Album and tracks shows as available. But if you want to play, an error message occurs. See screenshot 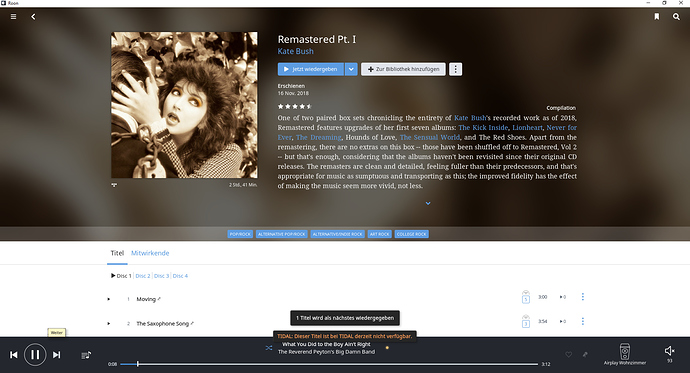 I can play the MQA versions on Selection from the other sides remastered but not the other albums, I’m in the UK.

Remastered Pt.I through Pt.IV do not play for me either; UK too.

Same in Belgium. On Tidal the Remastered Pt.I through Pt.IV albums do not show up at all.

@Sloop_John_B And at a 2nd try the album plays 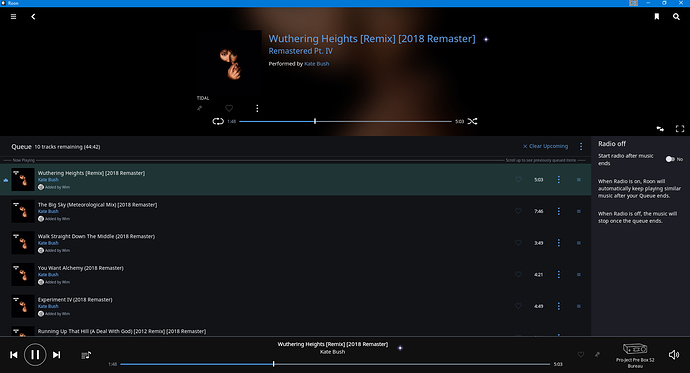 Edit: The album is an MQA version: 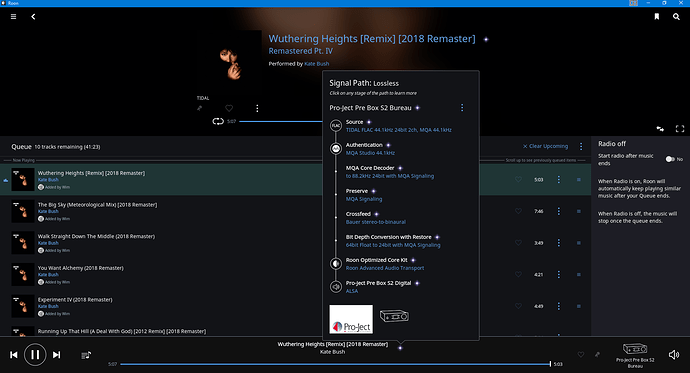 Funny you mention Kate Bush, SJB… I had an issue with the live set “Before the Dawn” showing in Tidal when first released but being unable to play; when I wrote to get help, it eventually disappeared from the available titles list. Just last week, I spotted it in Roon, but it gave a bunch of errors and still can’t play (I’m in Canada)… it remains unlisted in Tidal (direct in app, or in the Naim Tidal interface). Just checked for the new remasters: all appear in Roon but none play except the “Selections from the Other Sides”… which is the only title that shows (and plays) in the Tidal app. So my experience is the same as yours.

A further note on Roon vs Tidal availability came up when I added the Roon Recommendations tagged collection (attempting to expand my horizons and maximize Roon “related titles” and “radio” features)… many won’t play and indeed show as “greyed out” in my Naim and Tidal app “Favourites” list. Strangely, I searched on one title (Otis Redding Blues) and there was an alternate version (I think) available here, which plays in both Tidal and Roon… but it wasn’t the version that appeared under the Tagged Collection.

Seems like a bit of a curation and regional availability snafu, as you suggest.

Weird, on Qobuz the Part.1 - Part.IV (and Before the dawn) play only for 30 seconds per song. I’m in the Netherlands.

Not playable in the US via Roon and they don’t show up in Tidal direct. Looks like the metadata was pushed to Roon but the content was yanked or was never there.

I have the same problem with the KB remastered and a couple of other albums, strange.

Yeah. Same here. All the Kate Bush Remasters (2018) do not play. Roon says “too many errors” and stops trying after 4 or 5 tracks, tried several times to play the same tracks with same result. But the same album non-remaster plays OK.