Let a song end at its end when stopping

Hi,
In then meantime I am a long time user of Roon, but still miss the possibility to tell Roon that it should stop playing after the current song ends. When I stop listening, it’s unpleasant to cut a song immediately somewhere in the middle or to sit there and watch the end approaching to hit stop. Shouldn’t this be easily implementable?

If you clear the 'upcoming queue ’ (click on queue at the bottom), that’s exactly what Roon will do.
(assuming Roon Radio is deactivated of course).
Or am I missing something?
Dirk

Sometimes it would be useful to tell Roon to play to the end of the current track and then stop while leaving the remainder of the queue in place so that one can continue listening later. I end up doing what @WKW describes: watching the progress bar until it reaches the end of the current track, then trying to hit pause before the next one starts. It’s a minor frustration in the grand scheme of things, for me at least, but one that occurs quite often.

I end up doing what @WKW describes: watching the progress bar until it reaches the end of the current track, then trying to hit pause before the next one starts. It’s a minor frustration in the grand scheme of things, for me at least, but one that occurs quite often.

This is what I do. Additionally, when the queue is on Pause one can rewind to the start of the paused track.

Still, what you ask for would be a ‘nice to have’, although not a ‘need to have’.

I’d like to see this implemented by allowing us to insert a pause in the Queue. I’d also like to be able to Queue an Internet Radio station.

With the stop command I’d like an option to fade down instead of an abrupt stop.

I wonder how that could be implemented without being not suited for certain genres / tracks and not overly complicated usability wise.

Let me explain:
if I (have to) hit pause while the Waltz suite from Strauss’ Rosenkavalier is playing it could be that I don’t want to listen 10 or more minutes (the suite has a total playing time of about 15 min. as a single track) until the orchestra made it through the entire piece.
On the other hand a right click / long press whatsoever on the pause button seems like a usability nightmare because, well, if one hits pause the expected behaviour is: pause. A short (configurable) fade-out time as @andybob suggested would be nice.

And being able to pause (not stop) internet radio streams (time-shift) would be almost awesome.

This is already a feature request by me:

Embed a Pause in the Queue Feature Requests

I don’t know if I am the only one, but a feature I would find useful is being able get the queue to pause after the last track on an album or even at the end of a track of my choosing. Anyone else?

If you go to the Queue page, there’s a big blue button that says End. Provided you don’t have Radio on, Roon does exactly what you want, it stops after the currently playing track. If you do have Radio on, one additional click to turn the Radio off works.

Hmm, can’t seem to find that. Where is it on Queue page?

Are you talking about the button that appears in the Radio sidebar when Radio is playing selections based on the last Queued track?

That’s only to end Roon Radio, as far as I can tell.

Near as I can tell, the End button is only available if you are shuffling a Queue.

Sorry to be a PITA, but I just shuffled a queued album and I don’t see any blue End button.

Screen print? If that’s too much trouble then never mind.

With the stop command I’d like an option to fade down instead of an abrupt stop.

Right, I’d appreciate this also. I had this option in a Sony SACD Player long time ago and it was so pleasant.

Sorry didn’t realize this was so complicated. Here’s a screenshot of an album I bookmarked and then played by shuffle. 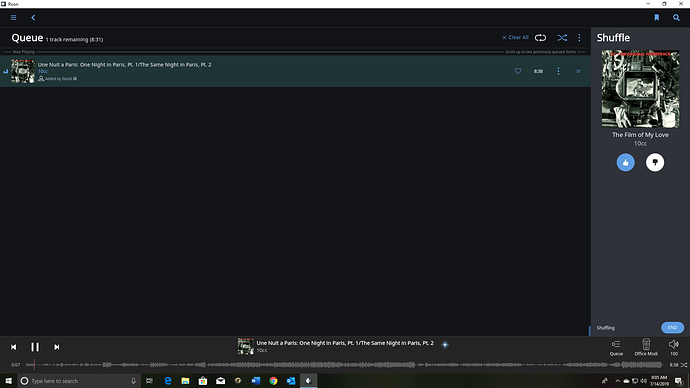 Blue button at the lower right is “END”.
Here’s a screenshot of an album not played shuffle. No “END” button. 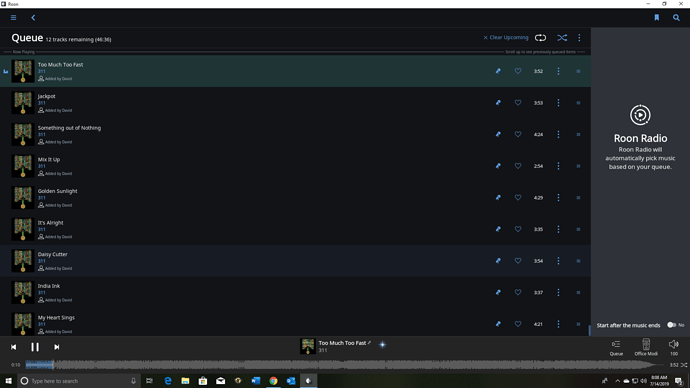 Sorry didn’t realize this was so complicated.

Yeah, that’s what I thought you were referring to.

That blue button is to end Roon Radio, not to end after the current track, which is what this post is about.

Shuffle or bookmarking doesn’t have anything to do with it.

Yeah it does. Try shuffling anything in your library. You’ll see the END button there and it works as advertised. I typically listen to a subset of my library on shuffle and the END button is always in the Queue. Radio is not playing. If you see the first screenshot you’ll see a big Shuffle at the upper right corner. This is not Roon Radio.

Why do you keep talking about this “End” button when it does not solve the problem being discussed?

Try shuffling anything in your library. You’ll see the END button there and it works as advertised.

OK, I see what you mean. You Shuffled bookmarked selections, not just the Queue. Never tried that.

Still, I think people were talking about the current Queue. Dunno.

Thanks for the input.

Why do you keep talking about this “End” button when it does not solve the problem being discussed?

My fault. @David_Gibson just trying to enlighten me.

A. Because people asked me for clarification.
B. Because it solves exactly the problem being discussed, just not in every case. It works perfectly for me. Roon just needs to extend the functionality to all playback cases.

Sorry if you think this is useless information. Just trying to be helpful. No need to be rude about it.

No, it does not solve the problem even if extended to every case. And it only seems to work in one specific case. The problem is more complex than the stated case OP of this thread presented. That’s why I added the link to the more detailed Feature Request.

Either way, what we are looking for is a way to enter a pause in the future and not just at the end of the current track. For example, put a pause at the end of an album in a multi-album queue. Or, put a pause 10 songs into the queue. Or 20 songs…or 30 songs or 5 songs.