The release date for London Grammar’s Californian Soil album shows as 1 Oct 2020 on the album page (possibly when the first track from the album was released) but in the album editing dialog it shows it (correctly) as 16 April 2021. See attached photo. 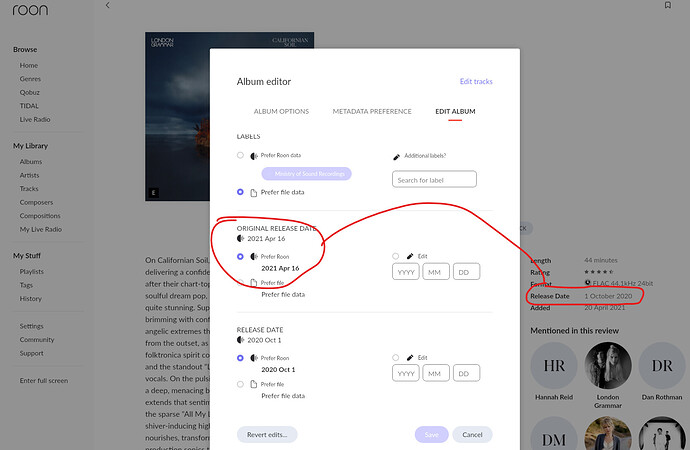 However, I think the original release date should usually predate the release date. Looks to me like a metadata inconsistency at the source (Qobuz?). Do you see other dates when you look that album up in the Qobuz app?

Different dates. 21 februari 2021 was plannend release date. I ordered the vinyl version to be deliverd that date. It’s coming this week. 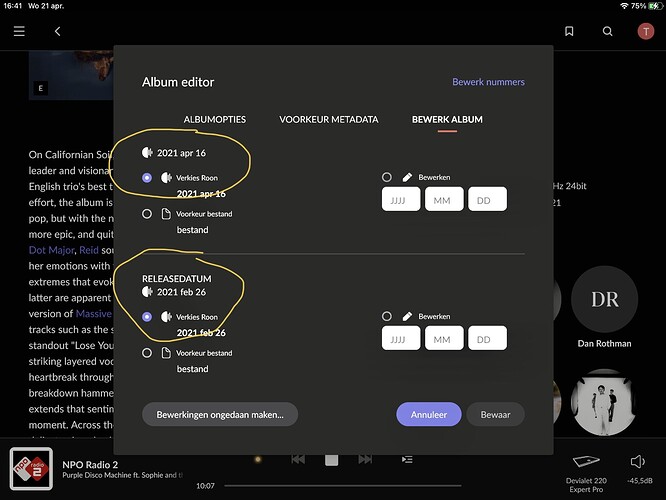 Yup, original release date was Feb and then they announced delays and it’s been released on April 16th. I too got the vinyl last week. Bit disappointed with the overall quality if I’m honest.

That’s the date Qobuz added it to their database. They do this all the time adding albums before release that have that date as the release date. Its a Qobuz issue essentially.

Thanks - I hadn’t spotted the separate entries for ‘Original Release Date’ and ‘Release Date’. I also hadn’t seen (or wasn’t properly looking so as to see) the release date above the album title. I will try to get used to that. (Or I will blame the 1.8 user interface (joke).)

For this album, I guess it’s just a metadata anomaly that the Release Date precedes the Original Release Date, but I won’t get too hung up on that (especially as I now see that the date that I am interested in is pretty much top dead & centre on the album page).

As for the album itself, it doesn’t seem to have the instant appeal of If You Wait or Truth Is A Beautiful Thing, but perhaps it will take a few listens.

As for the album itself, it doesn’t seem to have the instant appeal of If You Wait or Truth Is A Beautiful Thing, but perhaps it will take a few listens.

Yes so am I. First track Made me wash the record first. Didn’t help😜

There is another song with the same effect. I listened to the record before the digital fine and was about to box it back up and return it.