A story dear to fans of the Palm Pilot, the size and shape of the compact cassette was determined with a block of wood that Lou could carry around in his pocket. Portable media.

Lou Ottens, Inventor Of The Cassette Tape, Has Died

"Next time you make that perfect playlist on Spotify or send a link to share a song, you can thank Lou Ottens," documentary filmmaker Zack Taylor told NPR.

What a great character. he also invented the CD.
What I liked the most in this story is this quote (full article here https://netherlandsnewslive.com/inventor-of-cassette-tape-lou-ottens-passed-away-financial/107722/):

Decades later, Ottens told the Eindhovens Dagblad that in the 1960s he was completely unaware of the groundbreaking research he and his colleagues were doing. “Well, no. We were little boys who had fun playing. We didn’t feel like we were doing anything big. It was a kind of sport. ”

What? No “solving music”? No “disrupting” anything? He would have been laughed at in today’s Silicon Valley… hahaha

Ottens, who died on Saturday, had little patience with the renewed popularity of the cassette tape – or even vinyl.

Nothing can match the sound of the CD,” he had told the Dutch newspaper NRC Handelsblad. “It is absolutely noise and rumble-free. That never worked with tape … I have made a lot of record players and I know that the distortion with vinyl is much higher. I think people mainly hear what they want to hear.”

Excerpt from The Guardian. 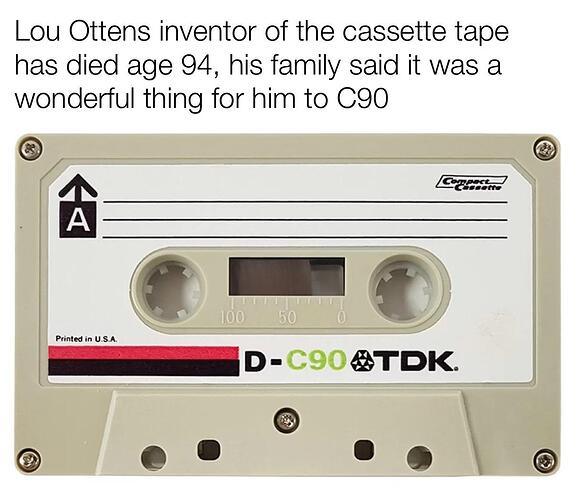 Philips bought a silence from RCA to allow them to make and sell cassettes. Which were waaaay too big.
Ottens was head of NAT lab at the time and refined (with his team) the RCA concept to the compact cassette it became. Invented? No. Improved, minified and marketed? Yes.
It was the final decision of Philips not to charge other companies for producing the cassette that eventually set the market on fire.

Philips bought a silence from RCA

I love this in its predictive text version. Visions of philips executives finding out that RCA holds the patents on silence.

typing silence instead of license.

I think you’re being unkind. The design was groundbreaking and making something smaller is not trivial, especially when you consider the huge reduction in magnetic media used to record sound.

No intention to be unkind. You’re right minifying is not a small job.(pun intended)
I was just pointing out that most things are an evolution of earlier thinking.
Someone already came up with the idea to put the tape in a plastic housing to stop the fiddling with loose tape as on reel to reel.
I’m not sure about the width of the tape, haven’t checked that. I guess you have.
Length, thickness of tape everything had to be adjusted.
There was a huge amount of quality loss accepted for the sake of convenience.
History repeated itself with MP3.