I thought it was working before, but I found that my Luxman DA-06 converts all DSD64 files to PCM352. See the captured image below. How can I play DSD native? Should I disable anything in the DSP options? I was using volume leveling and sampling rate conversion, but turning these off did not help. Please advise. 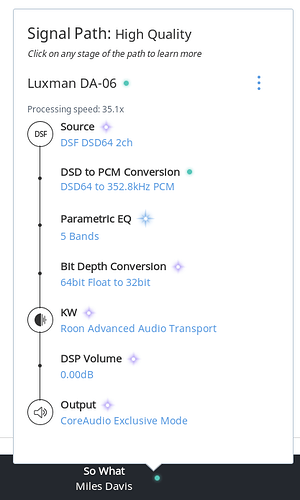 I believe Roon performs all DSP processing in the PCM domain. If you turn off the Parametric EQ and other DSP, is DSD still converted to PCM? Have you enabled DSD over DoP in the Audio Decvice Setup?

Yes, it was the Parametric EQ that was forcing the conversion! Thanks for the prompt response.

Volume leveling has become an essential feature that I use now, but the overall volume tends to be a bit too low, which is why I applied parametric EQ to boost the level by 3dB. This is so that I can keep the volume knob in a reasonable linear range of the potentiometer (say 10-12 o’clock). I have a low powered tube amp and I don’t want to overload it. Is there any way to accomplish this without relying on parametric EQ?

I don’t think volume leveling in the DSD domain is currently possible in Roon. See here and the rest of the linked thread:

Not currently…there is a horsepower vs user experience problem. We insist on putting volume control in the endpoint to minimize lag/latency when changing volume. Doing a DSD soft volume control would consume a lot of resources. Many endpoints in our ecosystem are not powerful enough to perform the adjustment. It would also be distasteful to have a signal path that re-modulates the DSD twice–once to process it in the core, and again to process it in the endpoint later. So no, we don’t do it. T…

This is no longer the case. We released support for DSD volume leveling earlier this year. There is a setting to do things the old way for anyone who runs into performance problems. It’s called “enable native dsd processing” in the sample rate conversion section of DSP Engine.

@brian Thanks for the information, but could you please clarify?

It definitely does affect DSD playback if enabled. This is what the signal path looks like: 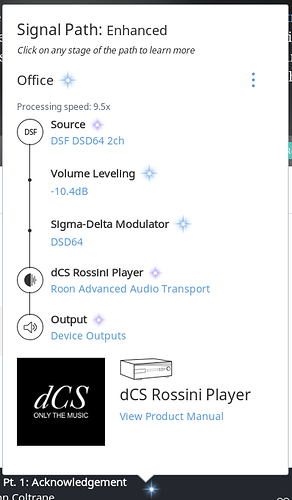 Parametric EQ does affect. Once EQ is turned on, then all DSD files are converted to PCM.

Yes; it sounds like you have “Enable Native DSD Processing” disabled.

Where is “enable native dsd processing” option in the DSP engine? I don’t see it on my system. 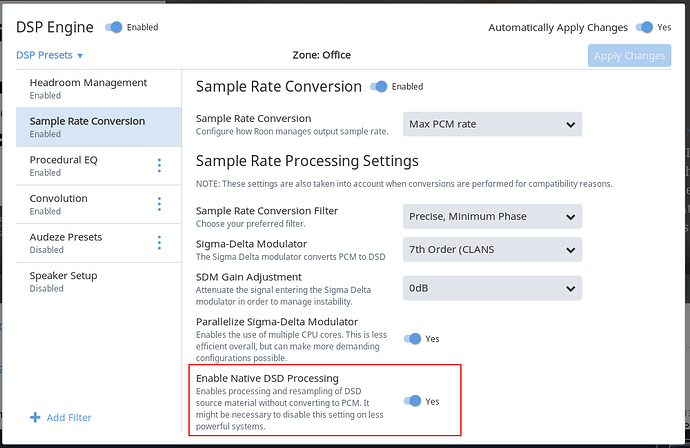 That’s very strange. This is what I see. It also indicate that I have the latest version (1.3 build 262).

BTW, in #1 above, what I meant is that I can play DSD native even with volume leveling on, which is what I want.

That means your DAC doesn’t support (or isn’t configured to support) DSD–that’s why all of the DSD options are gone.

If you’re ultimately going to be playing the content as PCM, it’s a lot more efficient to process it in the PCM domain, since it will be going through the conversion anyways.

The reason to do DSD processing is when you have DSD source material going to a DSD DAC.

As you can see, this is Luxman DA-06, which is capable up to DSD128. I can play DSD native without EQ applied.

Try setting “Sample Rate Conversion” to a setting that does not configure everything to convert to PCM. Like “For Compatibility Only” or “DSD” or “Custom” (with rules to keep DSD formats as DSD).

Tried them already with no avail. You also picked maximum PCM rate in the above example, but could see all. Not for me.

This is not the most urgent item, as I can live without the EQ, but I just want my Roon to be up to date.

Moving forward, and my apologies if I have missed this in one of your previous responses, but can you verify for me what your “DSD Playback Strategy” is set to in the “Playback” tab for the device settings being used with the DA-06?

@Eric, it’s set to DSD over PCM v1.0 (DoP). Now I finally figured out that the volume control has to be FIXED!! It’s all good now.

In the next version, it would be good to add this information in the Volume Control Mode setting.

For general users, here’s the summary. To play DSD native on a DSD-capable DAC,