Is there a number I can call and get someone to diagnose a problem?

Hi @Bob_Mueller – while we don’t do phone support, we do solve issues here on the community site every day. If you can tell us the basics of your setup and what’s going on (as described here), I’m sure we can help.

Let us know what’s going on and we’ll make sure we get everything resolved for you. Thanks!

I have Roonserver installed on my Musicvault M7which is a windows 10 machine and am trying to use my Mcbookpro as the controller. I have Roon installed on the MacBook as well.

When I start up Roon on the MacBook I get a screen saying “choose your core” and it is looking for remote libraries but it never seems to find the server which is the core. I’ve had this working be it seems to “lose” sight of the Core from time to time.

This KB article sets out common issues arising with remote connections. First things to check are:

How is your network setup ? Do you use any switches ?

I read the article but 1) I don’t have a menu like the one shown. I have a menu down the left side, not across the top. When I select settings and then setup, there is no reference to “accept remote connections”. The page says, settings desktop 0Q3KPRB and the options are:
Configure Roon OS devices
Enable Sqeezebox support
Core name
Theme
Hide Mouse pointer
Memory for photos/Artwork
Clear image cashe

The is on the MacBook installed Roon
If I go to the desktop and click on Roonserver, I don’t get any menu

P.S., there is no firewall I am aware of and I don’t know what you mean by “switches”.

I should have seen you had RoonServer installed. It is automatically configured to accept remote connections. Apologies for that.

Let’s test whether any firewall is the issue first. Quit RoonServer and Roon on both machines and check that both firewalls are off as follows.

This is how to turn off the firewall in MacOS:

OS X: About the application firewall

OS X includes an application firewall you can use to control connections made to your computer from other computers on your network.

You may get various warnings about how turning off the firewall(s) will leave your computer(s) vulnerable to attack. Don’t be worried about those because we are only going to leave the firewalls off long enough to test whether your Remote (on the MacBook) can find the Core with them off.

With both firewalls off, try starting RoonServer on the Core and then Roon on the MacBook.

Is the MacBook able to find the Core with the firewalls off ? If so then we can configure the firewalls to accept communication between RoonServer and Roon. If not, then we will check other things that could be causing the issue.

Turn the firewalls back on after making the check and let us know the outcome back here.

An Ethernet switch is a device that connects multiple other devices to a network. Sometimes they can have default settings that interfere with communication in Roon. Can you describe your network setup ?

Thanks!). Please let me know what the outcome of the tests were and if further assistance is required just drop @support a flag and we’ll be glad to help.

It seems to work with the firewalls turned off

After the firewalls are turned back on we need to configure them to accept communication between Roon and RoonServer. The two programs to authorise are Roon.exe and RAATServer.exe.

This article sets out how to authorise programs in Windows 10: 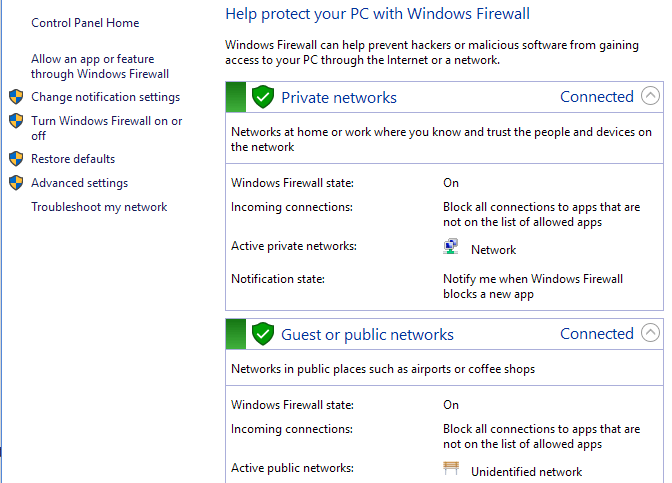 In Windows 10, the Windows Firewall hasn't changed very much since Vista. Overall, it's pretty much the same. Inbound connections to programs are blocked

This article sets out how to authorise programs in Mac OS:

OS X: About the application firewall

OS X includes an application firewall you can use to control connections made to your computer from other computers on your network.

Check back again after you have authorised the above two programs and let us know if you are still working OK.

In theory the firewalls should have asked you if wish to allow access when a program first requests it.

For some reason there were a whole lot of separate instances of Roon and RAATserver in the list of allowed apps. Some were checked as allowed and some were not. I just checked them all for the private network. I will let you know if this works.

If I go away for a few hours and then return to try and play Roon, I get that the connection is lost and I’m right back were I started with it nt being able to locate remote libraries.

Hey @Bob_Mueller – so are you setting the firewall rules on the server, the Macbook, or both?

If everything works with the firewalls off, most likely the rules aren’t being set properly. You might also double-check that the Macbook is connected to your Wifi network.

If none of the above helps, could you give us the details of your network? How do the server and Macbook connect to your network?

I don’t know what you mean by the “details of your network”. I am not a network engineer. Could you be a bit more specific. I have Comcast wifi with a router. The Musicvault server with roonserver is connected to this with an Ethernet cable. The MacBook pro is on the network via wifi. I seem to be able to get things working and then I come back after a while and it doesn’t work until I shut everything down and try a bunch of things and start over. Is it supposed to work like that?

P.S. I have set the firewalls on both PC’s to allow the programs required. The Macbook is on wifi as I can get to the internet for anything else.

I don’t know what you mean by the “details of your network”. I am not a network engineer. Could you be a bit more specific.

The specifics were in the link I’d sent you a few days ago, but you’ve basically given me what I need.

If you’re able to connect sometimes, that probably means this isn’t related to the firewalls. That’s good news, but in some ways it complicates this a little bit because it means that your MacBook isn’t consistently able to communicate properly with the server, like we would normally expect. There are a number of different places where things could be going wrong, so before we start troubleshooting could you explain exactly what you’re seeing?

When the MacBook is failing to connect, are you confident that you have decent Wi-Fi signal? The routers that you get from your ISP are notoriously unreliable when it comes to Wi-Fi.

Also, when you are in this state and unable to connect, it would be interesting to know if connecting the MacBook to your network using an ethernet cable makes any difference here. Let’s start there and confirm whether this is related to the Wi-Fi and we can go from there.

I am confident I have a good WiFi signal or about as good as one can ever get as I am 3 feet away from the router and have never had any other WiFi problems and have the best WiFi service that Comcast offers, so we can’t solve the problem there.
I will let you know how this sporadic issue proceeds.

My system has (mostly) been working after fixing the firewall and network settings as recommended but i still get problems where Roon is running from the remote but i have no audio. Then when I log into the core computer (using Logmein or just attaching a keyboard and screen) and get that to play just using Tidal or Pandora (no Roon) and then go back to Roon remote on my MacBook, I get sound.

Hi @Bob_Mueller ---- Thank you for the follow up and sharing the results of the adjustments you have made.

“but i still get problems where Roon is running from the remote but i have no audio.”

Can you please clarify if you are not getting sound out of the MacBook remote or are you referring to a different end point you are using?

Why do I get no responses to my problem - you call this support?