I have two MacMini 2012 16gb with SSDs as my two Roon servers, one stereo and one surround.

The MacMini can run Catalina officially which goes out of support in October, so there will be no security patches etc.

I am wondering if anyone has tried using Opencore to get Big Sur to install, and the run Roon Server on it? Does it work OK? is there a performance hit? I have successfully installed Big Sur on a 2012 MBP - which is basically the same machine and it seems to run fine!

The benefit of doing this is that this update is completely free, whereas buying two further newer machines, isn’t.

(Please don’t respond with "buy a NUC, or Buy two Nucleii - I won’t be doing that!)

I’m in the same boat (2012 Mac Mini 16 GB) and have been considering my options, a Linux install being one of them though I’d prefer to remain with MacOS. I’ll be watching this thread.

Maybe more than 10 years is expecting too much.

RoonServer runs without a hitch and the full Roon package runs the same.

I do get the occasional crash or freeze with the OS but when you look at my outdated hardware it’s perfectly acceptable. Saying that, I’d like to update to something newer and just run the MacPro as a headless server.

I would recommend OCLP over plain OC unless you prefer it, see here: What is OpenCore? | OpenCore Legacy Patcher

is there a performance hit?

No performance hit whatsoever, once OCLP is set up properly and you have installed Big Sur you should not even know that you are running a hacked machine.

That being said I would definitely scour the Mac forums and find other users who have done the same. That’s what I did. The Mac Rumours forums are an excellent place to start and there is a wealth of knowledge out there.

Depending on your model and updates (I haven’t checked lately), I’d give DosDude a look. I’m sure he said he was updating his patch… If not, the TonyMac forums are a good place to start (despite a lot of people not liking that community from other mac forums). A lot of people have had success with big sur, but not Monterey due to apple changing more code.

Just one thing to possibly bear in mind here.
Once you move to a “hacintosh” it’s really tinkering and official Roon support maybe limited.
That said I’m sure the community will have plenty of suggestions if problems arise.
Good luck!

It’s not how to do it I am asking about but has anyone done it? And are there issues! The technique and patch I used my MBP is explained in this video, NEW 2022! Big Sur on Unsupported Macs [2008-2013] OpenCore Legacy Patcher!!! - YouTube

The GUI to achieve it is here… at the bottom, see screenshot. Release 0.4.9 · dortania/OpenCore-Legacy-Patcher · GitHub

This forum is where ALL Roon support, both official and member driven occurs.

My take on this is that it is better to hack an old Mac so that it is secure and can still be used on the web rather than dump it, and I want to keep it going until an official Apple Silicon native RoonCore version is released from Roon. Then I’ll use M1 Minis, I want to skip buying newer Intel MacMinis.

Totally understand and would probably try similar if I had that hardware lying around .
Good luck with it and as you have already noticed, plenty of willing and able assistance from the membership to hand!

I have successfully installed Big Sur on a 2012 MBP - which is basically the same machine and it seems to run fine! [/quote]

As an experiment I just installed Big Sur on a new volume 2012 MBP 8GB RAM, 256 SSD. After a few hiccups it was operational but I’ve noticed it’s running hot. I can dual boot into Catalina or Big Sur and using a temperature monitor it shows about 10 C hotter for both CPU and GPU than under Catalina. 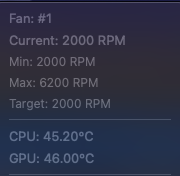