Third: It would be an absolute dream to maintain all my RoPieee endpoints in Roon. Just limit it to one spec of raspberry pi, like ROCK and NUC, and call it Roon Bridge OS or something like that.

RoPieee is essentially nothing to do with Roon. I think if you work on the principle of offering equivalence I’m not sure you can give something like Ropieee special treatment while endpoint partners on the Roon Ready programme don’t have that. Especially as Ropieee is strictly speaking a third party OS that runs Roon Bridge and as such is not Roon Ready! But I guess there is no harm in asking!

That’s a valid point! And there is actually nothing wrong with Riopeee.
I only just take apart 4 raspberry Pi’s, took out the sd-card. Flashed them one by one. Had a hard time to not mix them up. Connected them one by one to a monitor to see them boot, and a wired connection for WiFI-setup. Renamed all the devices to their original name in Roon. After testing, rebuild their cases. Place them back one by one to their original enviroments.
As you could probably have guessed by now: there was a new version of Riopeee released this week, so I had to reshedule my day off

So sorry if I was a little sensative about this. It would be great to just update them in Roon like the other bridges I have.
But I understand the whole special treatment to one endpoint solution. It just doesn’t look important to me. Just like the guy building a rock was probably never going to buy a Nucleus. I don’t think me using raspberry pi’s to change headphone amps in roon endpoints was ever going to buy Bluesound Nodes for that purpose.

Had a hard time to not mix them up.

Not sure why you cared about this, but you can rename your Ropieee from the GUI and access the GUI of every Ropieee device from the interface of any one particular Ropieee.

Yeah, that’s how I do things, also.

As you could probably have guessed by now: there was a new version of Riopeee released this week, so I had to reshedule my day off

You know that you don’t have to re-flash a card every time there’s a new release, right? That you can update from within the GUI.

Hi Thomas I took it you were a fan, just a frustrated fan, and aren’t we all at times.

I have PlexAmp like Roon hooked up to Tidal and last.fm and I use it the moment I leave the house. Some of the new PlexAmp features for sounds similar are also fantastic and better than Roon (though took two Weeks plus to process on my Synology)

Roon kills it for Music discovery and curation in my mind and that’s what I ended up buying lifetime for. PlexAmp has support for Sonos, Airplay and Chromecast which has expanded its usability, but it’s not great for an external DAC output as it can’t control anything but the default device which everything else also outputs too.

By the way if you want continuous playback, just turn on Roon Radio and then it works the same as PlexAmp. I have them both turned off as I am an old school album listener.

As we all chase the perfect digital music system, the small issues become ever more into focus. Plex and PlexAmp have come on plenty in recent years, and I hope it continues.

Roon moves both more quickly and slowly. I’m not really sure it was ever for us, it sometimes feels like we were just a useful way of paying for what the Roon team wanted themselves. Slightly tongue I’m cheek there, but occasionally it rings true.

I’m familiar with the fact there should be a way to update them after a sheduled reboot. I only never saw that happening. How can I update tem from in the GUI?
I thought i have read yesterday on the changelog that the only way to install this update was by reflashing them.
Maybe that is because it was a major update or so. It’s the first time I wanted to update them.
They where still on 4.017, still not updating after reboot, and 4.0.17 was yesterday allready 4 releases behind. So I decided to do it manually.
But that’s not the actual tread here

Hmm, I’ve never re-flashed for a new release. There is usually a notice that pops up in the GUI.

What are you using Ropieee or RopieeeXL? Maybe that’s the difference. The new Ropieee has to be re-flashed because it was a major rewrite, but you shouldn’t have to do that again. RopieeeXL hasn’t been re-written, yet.

There was a recent update to Ropieee that required a re-flash because it was recompiled from the ground up and no longer owed anything to a third party OS.
@Thomas_Vandromme I see my post as a critique rather than criticism! I’m a happy user of Ropieee and it has pushed a Roon Ready device to the sidelines so I appreciate its qualities. Also I thought that when an update to Roon Bridge was available it updated when you selected update on the blue pop up box? So there is no requirement to update via a Roipieee update. But maybe I’ve got that wrong.

There was a recent update to Ropieee that required a re-flash because it was recompiled from the ground up and no longer owed anything to a third party OS.

Yeah, but my point was that once that re-flash happens, one should be able to do future updates from within the GUI.

Just successfully tested this on RopieeeXL, don’t know about Ropieee. 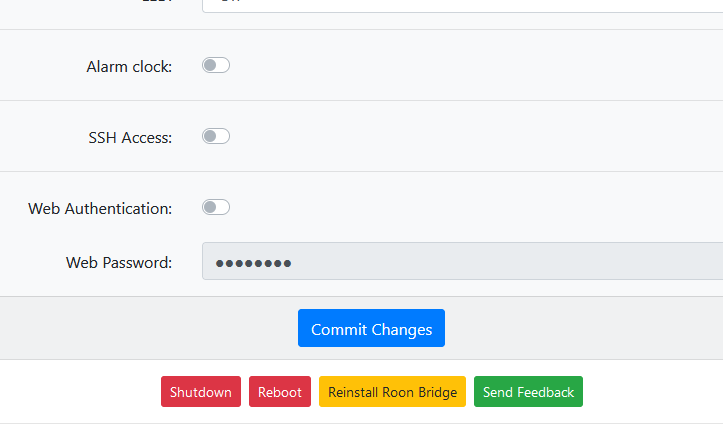 You can. No one said you couldn’t once re-flashed. If you are looking for an update prompt from within Ropieee I don’t know if that is viable. But you can certainly kick Roon Bridge which should then put the latest version in. I suspect we are talking at crossed purposes!

Has this gone off topic?

It was a series of responses to a request made by someone for Roon 2.0 who also tied Ropieee into that request so it is in good faith even if not strictly all about Roon OS 2.0.

Yes,
We ended up concluding Riopeee is just fine on its own and doesnt needs to be integrated in the Roon offering.

Next to that do I see a lot of improvements in Plex and Plexamp. Things I prefer in Plex/plexamp, so I would love applied to Roon OS:

If I sounded frustrating, it was mostely because of Sonos issues that are clearly Sonos-related.

I love what I can do with Roon now. Just would like some improvements so I can start using Rock without Plex next to it to for missing functionality.

I just got PlexAmp working (I’m a dedicated Roon lifetime subscriber, but all this talk has gotten me to look around anyways). I have a lifetime Plex Pass from years back, installed the Plex server package on my Synology, pointed it to my Music folder, it’s scanning right now.

Question: is there a way to “cast” music to my Ropieee endpoints, either via UPNP or AirPlay or some other way? When I hit the “cast” button on PlexAmp, it just shows my Sonos endpoints (though interestingly and irrelevantly it shows them at both of my homes). Any guidance would be much appreciated.

In ropieeexl there is a upnp client option I think

So, enable UPNP/DNLA in the RopieeeXL, enable DLNA in Plex settings… still not seeing zones. Will try to restart Plex when it’s done scanning my music files.

Question: is there a way to “cast” music to my Ropieee endpoints, either via UPNP or AirPlay or some other way? When I hit the “cast” button on PlexAmp, it just shows my Sonos endpoints (though interestingly and irrelevantly it shows them at both of my homes). Any guidance would be much appreciated.

RoPieeeXL supports both UPnP and Airplay: you just need to enable it and you’re good to go.
Make sure the output of both services is configured to the right setting.

When I use Audirvana, it uses UPnP to my RPi4 running RoPieeeXL. It works well but I usually have to reboot my RPi4 when going from RAAT to UPnP or from UPnP to RAAT. I just unplug it for a few seconds.

Ah, PlexAmp doesn’t support UPNP/DLNA. Plex does, but not PlexAmp. PlexAmp only seems to support Sonos. It doesn’t appear to be ready to cast to my UPNP Denon amp nor RopieeeXLs in UPNP/DLNA, both of which are found by Plex. PlexAmp has a headless version, but that takes over the Ropieee. Back to the drawing board for my “internet is down, I want to be able to listen to my local library” solution, I guess I have “playing from the Sonos app to Sonos” or “playing from the Plex Server” but neither is very good, and I really don’t want to learn / license Audirvana.

PlexAmp Supports Airplay and Chromecast, but I didn’t think it supported UPNP (but not with enough confidence to state it first).

If you have a spare Pi you can use it on that and output it via USB. Not bothered to try it myself but looks like a good option for some.

ARC means I have not played much with PlexAmp recently, but given I have just had to wipe my Android ARC setup once again and my iPhone ARC is crashedllic then that is going to have to go under review.