When a device goes to sleep (either MacOS or iOS), when returning to Roon, you’ve lost your place in the album’s track list. This is pretty annoying to me, especially when listing to a large compilation of tracks, common with classical music. I often like to see what came before and what’s coming after, and I’d expect that in a music player.

I wrote in about this about a year ago, and the response was along the lines of “It’s just a limitation of how the UX was designed, and it can’t be fixed”. Putting my software engineer hat on, it is perplexing why this wouldn’t be possible. But, okay, if that’s not possible, would it be possible to add a link to go to the playing track, like the queue has?

not sure if this helps but there is a button in the queue to go the the track now playing, it is labeled “Jump to Now playing”: 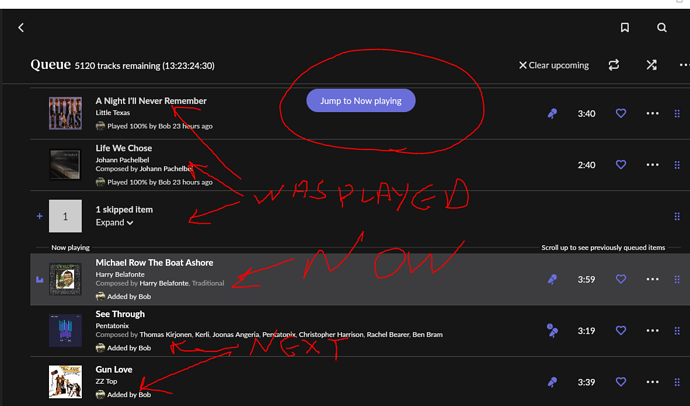 Also, the queue shows what was played and what will be played (if there is more in the queue or radio is turned on).

Thanks for the suggestion. The downside is that the queue isn’t the same view as the album track list (I edited my post to clarify that). The album view is preferable, especially for classical music, since it groups tracks together when there are multiple parts, and they’re all visible in an easy-to-see way. And it would be generally nice to stay on the album view with its content-specific info.

That said, I now see in the queue view there is button to show the sub-tracks of a piece in a pop-up (I didn’t think they were visible at all). So it’s a few extra clicks but not too bad for a solution. I do hope Roon can add that exact same button to the album view though.