I am just trying Roon on the trial period and it has tried to identify my music library (all files, not service).

Where files are unidentified, I would like to rearrange the tracks to match Roon’s albums, but the only way I see to do this involves hundreds of up and down arrow clicks per album (sad, but I counted them 250 clicks on the last album). Also as each track passes its neighbours it moves them out of position.

As there are hundreds of unidentified albums, I am looking at a 6-figure arrow clicking!

Please tell me I have misunderstood this and that there is at least a drag-and-drop facility or the ability to type in a track number or position.

Sad to say that you did misunderstand a thing, the click/click/click/etc is, at present, the only way to rearrange tracks to match the “identified” version in Roon.

When you try to identify an album see if there is a version available which does not match any tracks at all (all the tracks on the left hand side are white blank spaces) and use that one instead of clicking away.
See screen shot below for an example of what I mean: 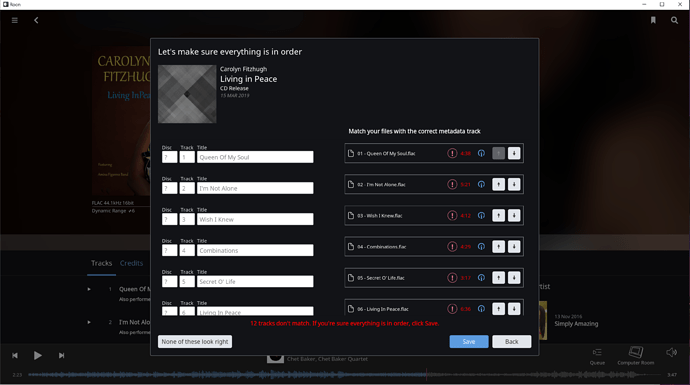 Thanks Ralph,
It is disappointing mainly because the rest of the Roon user experience is so good, I was sure there must have been a better way.

I don’t often see empty matching albums, but they are worth looking for.

Sometimes it pays attention to track numbering and so I can steer with MP3Tag or equivalent.
I also discovered that “Disable Multipart Compositions on this album” often retains my track names and numbering.
Not sure why preferring track number and title seem to do nothing.

It all seems very hit and miss.

The Roon’s way of getting metadata seems to be stuck in the auto-pilot mode, i.e. finds matches if and only if the match exists in one of the on-line metadata sources that Roon uses. This works great for most popular music but is rather hit and miss for most other genres, e.g. jazz, classical, world, etc.

I’ve been using Roon for about 5 months and at first I worked really hard at manually trying to identify my unidentified recordings and I’ve now managed to get to 85% identified (up from just under 80% when I started - and I have a very, very large music library).

If you missed it, there’s left and right arrow keys under the album art on the edit screen which will cycle through the various known album versions. Often one version will match the track order you have.

Thanks Mike,
I had spotted the version arrows and it has sometimes been a good way of finding the empty versions that Ralph referred to.
The key problem is that I organise my library primarily by work, not by CD, So there won’t be a CD release that matches.

The key problem is that I organise my library primarily by work, not by CD, So there won’t be a CD release that matches.

So there’s the rub. Roon no like that - MUST BE ORGANIZED BY ALBUM/CD

Everything is now organised and it works very well by work and rather than by CD.

What I learnt was to do almost all the rearranging with the ID3 tags in an external editor and not use the Roon identify arrows at all (or as little as possible). Then Roon just puts the tracks in the right places.

Thanks for your advice guys.