Many albums with “sample” tracks on Qobuz that were complete before

Same here. Annoying indeed. And they are playable on Spotify… ??

I just checked and the album I linked to IS complete on Apple Music, which I have a 3 month trial on, but have no use for…at least I SHOULDN’T have a use for if Qobuz weren’t screwing around with things. I also had a ton of Melodiya albums which are no longer streamable on Qobuz. In fact, one of the reasons I finally quit Tidal is that Qobuz WAS carrying those, but now they are “unavailable”. I would be curious if Tidal has this Pentatone album complete? Is anyone able to check for me? 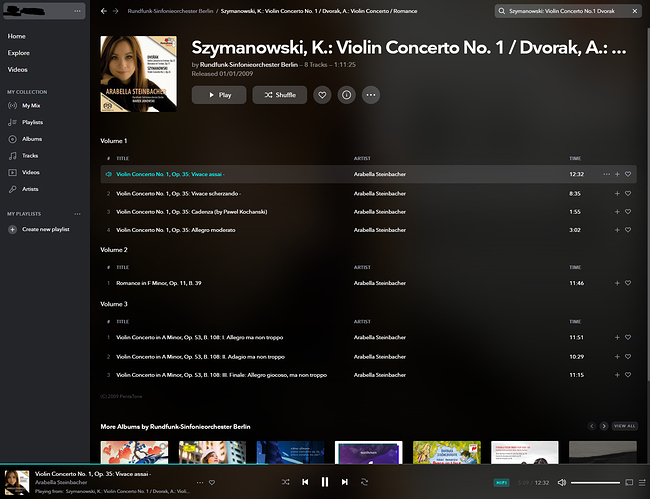 It’s not just Arabella Steinbacher. Seems to effect many PentaTone recordings. I randomly checked Julia Fischer and the Wagner operas. Same problem. Seems to be particular labels. Does anyone know if upgrading your subscription changes things? For example from Studio to Sublime?

Thanks for the Tidal screenshot! Is that an MQA title there? One of the reasons I switched to Qobuz was that they have tons of Sony releases in 24/96 which were not MQA on Tidal. And yes, I know…it’s a whole slew of Pentatone things…about 1/3 to 1/2 of my library of that label are affected. They were fine several days ago.

Not much of a consolation, I know, but this was discussed at length before. Looks as if smaller specialist labels like PentaTone (often specialist Classical labels) routinely offer only incomplete album samples on streaming platforms. An interesting quote there from Gramophone on the economics of streaming for these labels.

Two movements of a symphony available and two NOT? Qobuz

Yes, I understand this happens. But these were ALL completely available a few days ago. And there’s NO indication in Roon that these are samples (or “unavailable” as I see often), only an playback error message. Why should I have to go to the Qobuz app to find this out? I think something needs to be sorted out regarding that, so that we can see before uselessly adding incomplete albums.

I hear you. I am having exactly the same experience. Others will be as well. Seems to affect certain labels. I see a similar pattern with Chandos, for example.

It is not just incomplete albums. I am seeing entire albums which are now just 30 second MP3 samples when I had originally added them to my library as complete albums. For example, most of the Marek Janowski Bruckner’s. In this case Qoboz is now marking the albums as available for download only. But there are no streaming alternatives (except the samples).

Not sure what to suggest. I don’t know why roon is skipping the sampled tracks but not marking them as unavailable. Variations on this problem of how roon should handle unavailable tracks and samples from the streaming partners has been pointed out for at least 18 months now. Are there existing feature requests?

Personally, I don’t mind incomplete albums where the tracks that are available are complete. I like radio so single movements works for me in that context. But I don’t think I would like radio to play 30 second samples. I am not aware of roon doing this though as it seems to skip them. It is annoying though that a library album is not auto-replaced by roon when the streaming partner marks it as unavailable and there is an alternative.

Yes, Janowski’s Bruckner cycle has been gutted on Qobuz. Only No. 1 seems complete at this point. I had been working through it. Most of it seems to be on Tidal (takes some digging through their still lousy search algorithm which Roon isn’t able to sort out without looking into individual track listings…I had hoped Roon would be the “answer” to Tidal’s crappy organization, but it rarely is), but is only in 44.1.

Janowski’s Bruckner cycle has been gutted on Qobuz.

Indeed it has. I note that you can still buy the complete albums via Qobuz. However, I would rather have this as a choice, not a necessity, to listen to the albums.

Does anyone know if Qobuz is having trouble with certain labels? I have a Qobuz Studio subscription. Six to seven days ago I began to have trouble with recordings from the following labels: Chandos, BIS and some CPO. Under the Qobuz app all I get is “Sample”. Most tracks are blocked and only a few can be listened to for a few seconds. Under Roon many recordings I use to listen to now say “unavailable” and for others I get a warning that states no streaming and check your Qobuz account. It has go…

Does anyone know if upgrading your subscription changes things? For example from Studio to Sublime?

I’m on Sublime+ - and I’m seeing albums going unavailable. This is not good.

Maybe the mods should merge this and the other thread now that a pattern has emerged.

It is not just these independent Classical labels. I am seeing it with other genres. For example, several in the excellent LateNightTales compilations are going completely or partially unavailable. Up until recently it was a nuisance more than anything as there often seemed to be an alternative release. But now, increasingly there are no alternatives. So for example I had already replaced this album a few weeks ago because no tracks would play (and not marked by roon as unavailable). But now the replacement album is having tracks picked off one by one as unavailable.

Completely unavailable (as you can see, played to death) 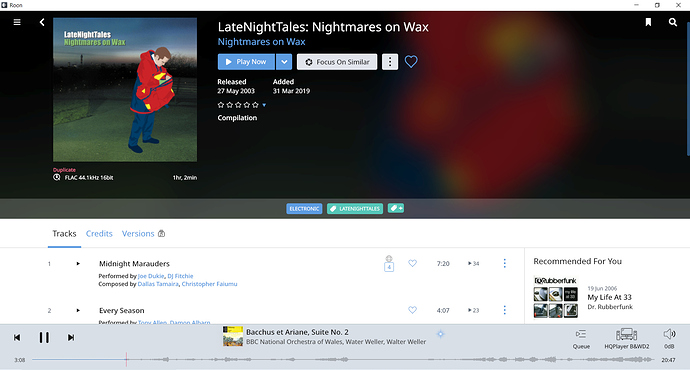 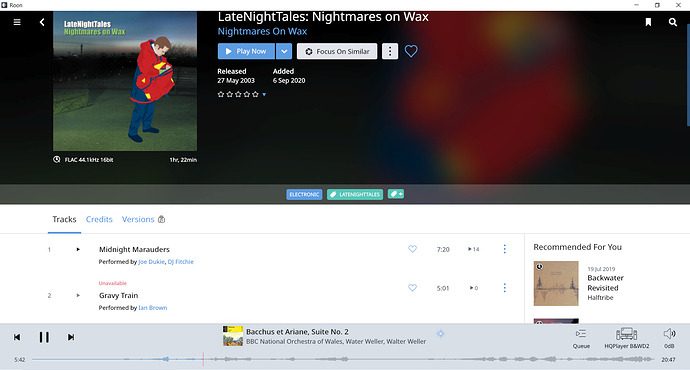 This started several days ago. I am located in the USA. I had a lot of “favorites” and now I can’t play many of them. Qobuz does not respond to their own “support” tickets. Here is just a small sample of what is happening. These screen shots are for Qobuz app.

Does anyone know if Qobuz is having trouble with certain labels? I have a Qobuz Studio subscription. Six to seven days ago I began to have trouble with recordings from the following labels: Chandos, BIS and some CPO. Under the Qobuz app all I get is “Sample”. Most tracks are blocked and only a few can be listened to for a few seconds. Under Roon many recordings I use to listen to now say “unavailable” and for others I get a warning that states no streaming and check your Qobuz account. It has gotten worse with every day as more Chandos, almost all BIS and more CPO recordings can not be played. It is not a Roon problem as it is happening with Qobuz app as well. To be honest, Qobuz support is terrible. I have sent messages, filled forms, and there is no response. I have a Tidal subscription as well, but I prefer Qobuz because I can listen to high resolution content.

Is this a country issue? I have Sublime+ in the US, and the two Qobuz BIS albums in my collection seem still playable.

US here. Some play, some don’t.

US here. I notice most of the Chandos having trouble have Hickox as conductor. Many high resolution Chandos are not available anymore. Most BIS are not available either anymore. Could this be a copyright problem with Qobuz? That is, the use of those recordings may have expired and Qobuz has not renewed their use. Qobuz recently partnered with Québecor in Canada. This could be the reason for the problem with certain labels. But if the are facing such problems, they should be forthcoming with their customers. Anyway, I am waiting for Qobuz to answer my service request. If those labels are going to continue to have trouble, I may stop my Qobuz subscription. Tidal has most of the same recordings (although none in high resolution). This does not fare well for Qobuz.