Two movements of a symphony available and two NOT?

WHY why why would two movements of a symphony be “available” and two NOT???

Is this a Qobuz album? I’ve noticed this before on some Qobuz albums. You’ll find that even if you use the Qobuz app to play the album, those tracks will only play the first 30 seconds, and the tracks are ghosted out in the app.

I think it’s an attempt on the part of the labels to get you to buy the album. It’s annoying, but I’ve bought a couple of albums because of this.

Edit: yup, this is the Alfvén album with the Mountain King Suite and Symphony no. 3. That’s the album I’ve been forced to buy, because I wanted the complete symphony…

I think it’s to do with the licensing terms/conditions from the various labels/distributors.
With some labels, you can stream all resolutions, including High-Res/24-bit flies from Qobuz. With others, you can only stream just RB 16/44.1 files, and then you have to buy the 24-bit files.
As I say, it depends on the label/distributor.

Its a licensing issue. I can play the whole symphony.

Really? In what bizarre universe do licensing issues rule out the playing of two movements of a symphony? This one, I suppose, but I still find it bizarre…

Not saying it is not bizarre or weird or downright … <>. Which version had the issue, the Presto release? 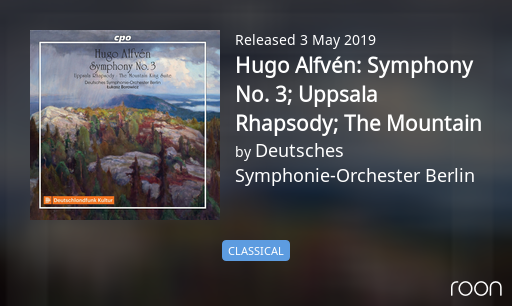 Well that was not one of the version returned to me when I searched on Symphony No. 3 op.23.

Okay, it took me awhile to find this release as it was not coming up with Alfven Symphony No. 3 in albums or in compositions. I had to track it down by the conductor. And when I did, the first two tracks played for me.

It doesn’t seem to have composition information as the Symphony is not grouped. On the upside, I prefer this version to the 4 others I listened to.

I cannot fathom a “licensing issue” which would result in ONE track of a symphony being available and another NOT. If Qobuz is permitting labels to make only certain tracks of albums available I will have to rethink my acquisition of this subscription. In my opinion I’ve ALREADY paid for this album…it should either be available or not. I guess I can understand making tracks of popular music available but I have my doubts even then. But with classical this makes NO SENSE whatsoever. Providing one or two movements of a four movement symphonic piece is nuts.

Daniel we both reside in the U.S. Should two subscribers in the same country paying for the same service receive a different product?

And when I did, the first two tracks played for me. 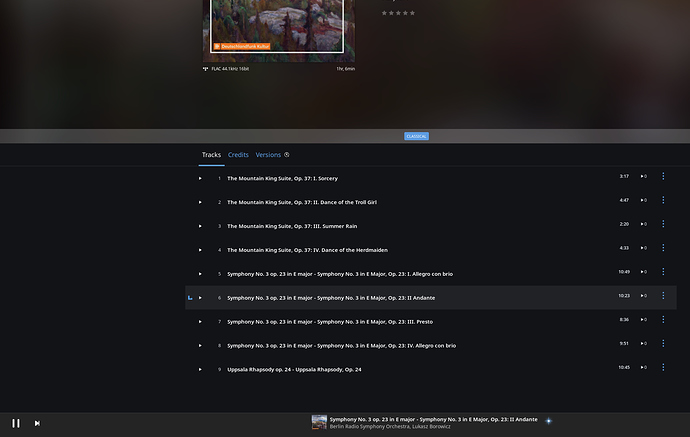 Playing the second track of the symphony.

Interesting. I’m in the Netherlands and I get this: 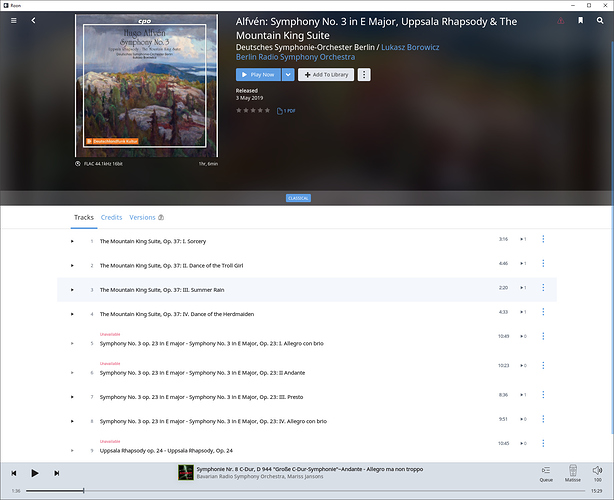 If you use the Qobuz app with your login, can you play the whole thing or do you get “Unavailable”? If it plays in Qobuz, then maybe there was an error with transferring the licensing information.

No, in the Qobuz app, these tracks are ghosted out, and will only play a 30 second sample…

Well, then it could be Qobuz has messed something up, or, some licensing crap between Qobuz and the provider. Either way, it seems to be solidly in the Qobuz issue camp.

Qobuz aren’t responsible for limited access to certain materials, it’s the labels/distributors that are responsible.
Labels/distributors often do this to encourage purchases/download sales of the music.
For example, here in UK I can stream everything from Qobuz in 16/44.1, but for certain recordings I have to purchase the work from Qobuz to stream it at higher resolutions/24-bit etc.
That’s the way it goes with licensing/rights, unfortunately.

Qobuz is a platform for streaming and downloads. A few labels, typically small specialist ones, only allow streaming of a few tracks of an album or 30 second samples as they need the revenue from the download to survive. Nothing wrong with that imo. Be grateful that you at least get a sample - other labels like Hyperion have no presence on Qobuz.

The problem is that I didn’t purchase “samples” for $300 a year. Frankly I’d rather not having samples they are a waste of my time because I’m not interested EVER in hearing only one movement of a symphony. If I could filter all this crap out I WOULD. Is THAT possible?