Many Missing Albums - Artists A And B

Hi,
I unsuccessfully looked for the following albums in Roon.This is only A and B. More to follow: 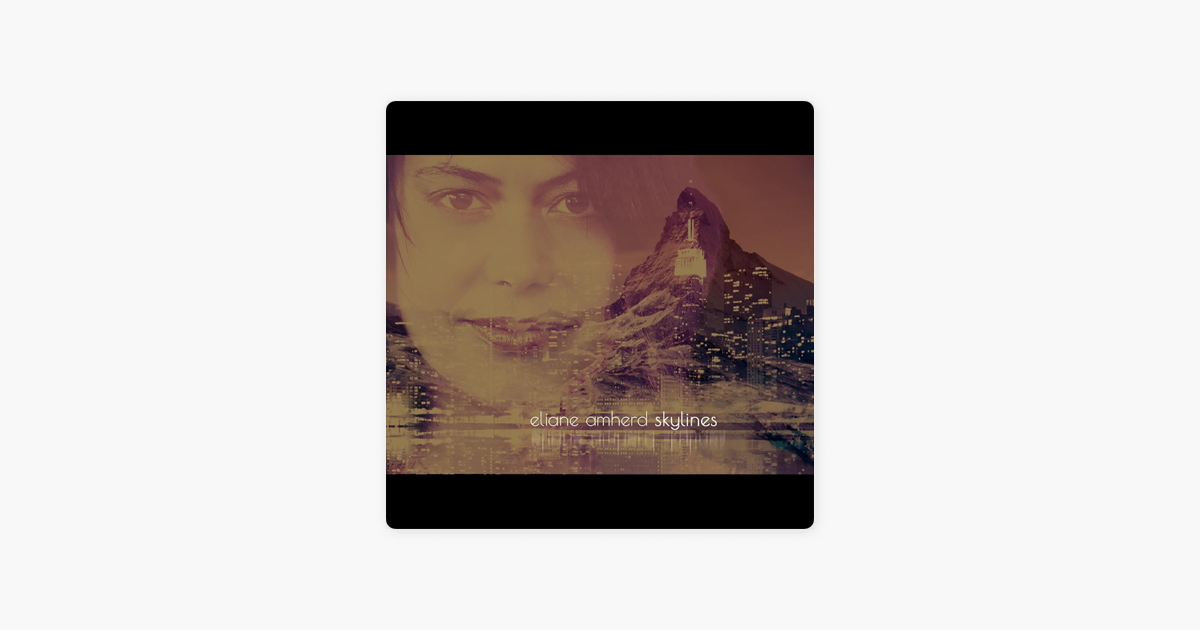 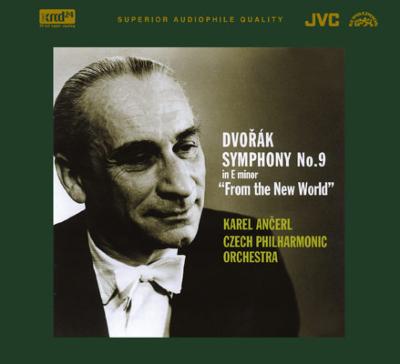 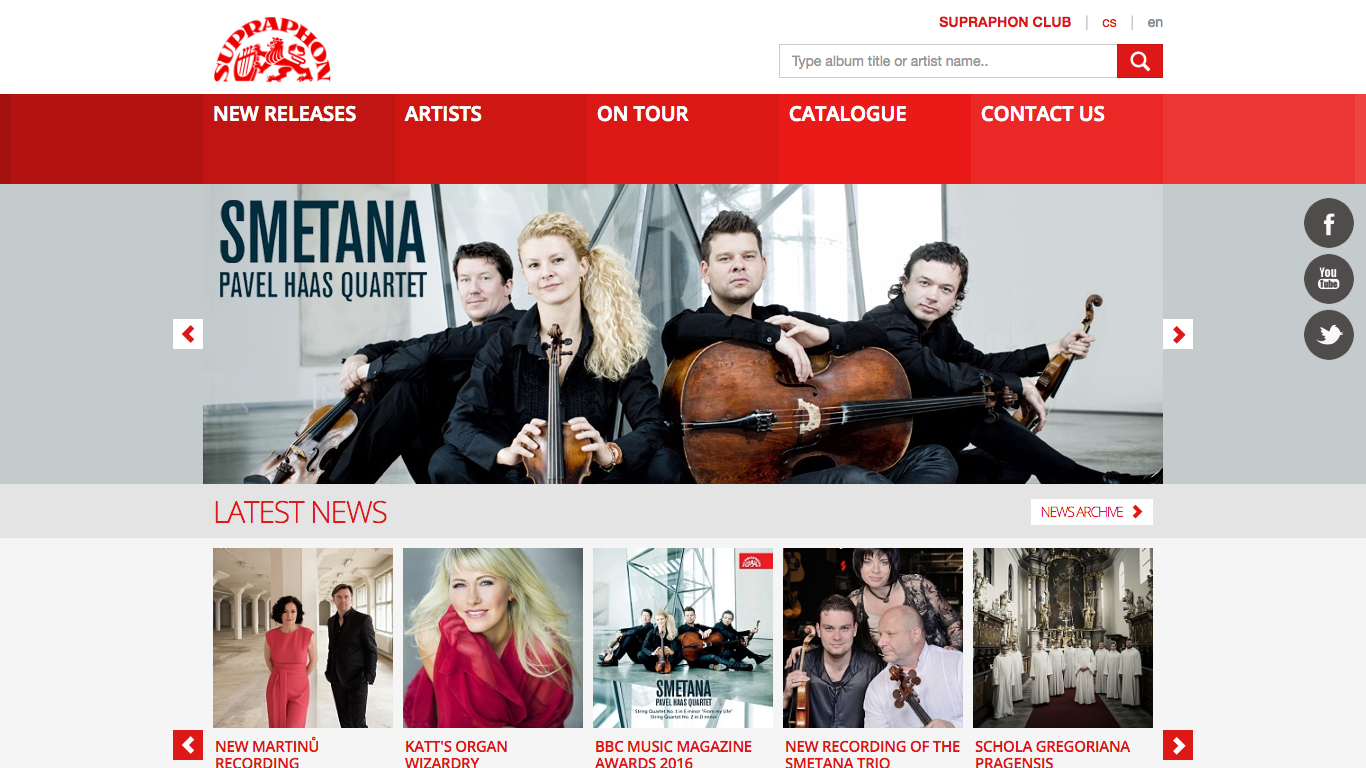 Supraphon Music Publishing is the most significant Czech record label, and has a distinguished history. The Supraphon name, (originally used for an electric record player, a technical marvel of its day), was first registered as a trademark in 1932. 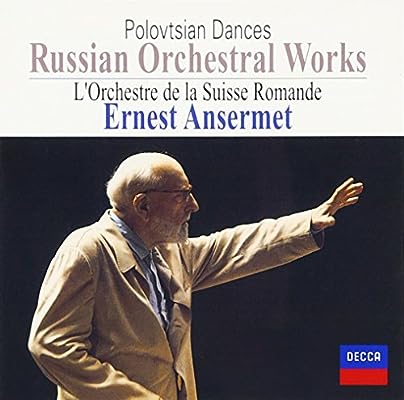 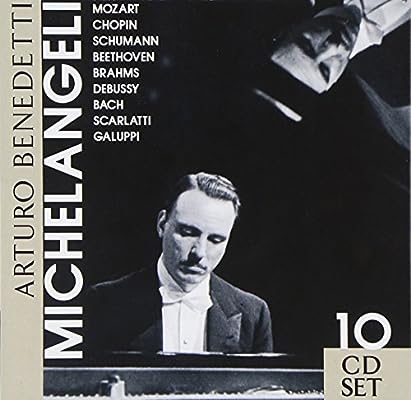 Teresa Berganza Teresa Berganza was born in Madrid. There she received a thorough musical training at the conservatoire in singing, piano, organ, harmony and conducting. She also belonged to the chamber choir ‘Cantores de Madrid’ - as a child she had... Who would expect anything as moving as the small cycle « La Maja dolorosa I-III » by Enrique Granados (1867-1916), which opens Teresa Berganza’s choice of songs and which, regarding its emotional intensity, can be compared only to Schumann’s «... 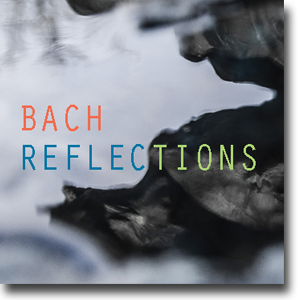 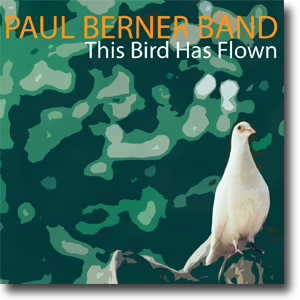 This Bird Has Flown

Paul Berner BandThis Bird Has Flown“Microphones are just like people, if you shout at them, they get scared.” Paul McCartneyPaul Berner - acoustic bassMichael Moore - clarinet and alto saxEd Verhoeff - electric and acoustic guitar (left speaker)Peter... 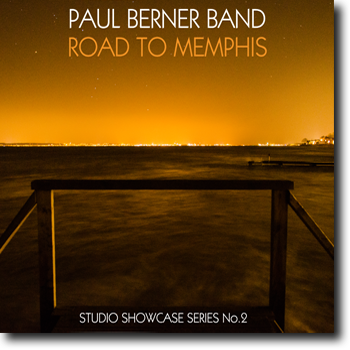 Jeremy Lee writes This album, released in 2010 on what Leonard and I like to call Sony’s Cheap-Cheap-Series-Without-Booklet-Notes (actually called Sony Classical Masters), is a compilation of… 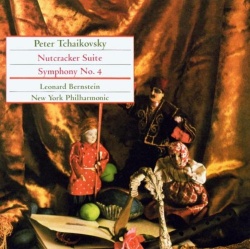 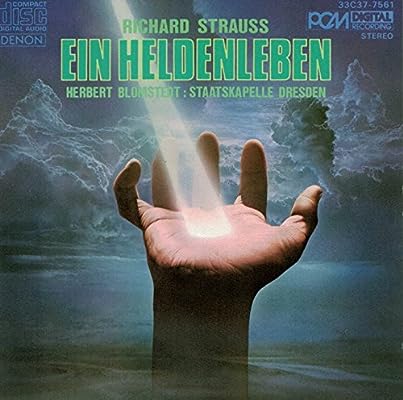 The Old Man and the Sea

BATIKThe Old Man and the Sea "Everything about him was old except his eyes and they were the same color as the sea and were cheerful and undefeated"(Ernest Hemingway) Ed Verhoeff - electric guitarWolfert Brederode - pianoMark Haanstra - electric...

In fact, at least two of the items above are indeed in the database, possibly more than two: 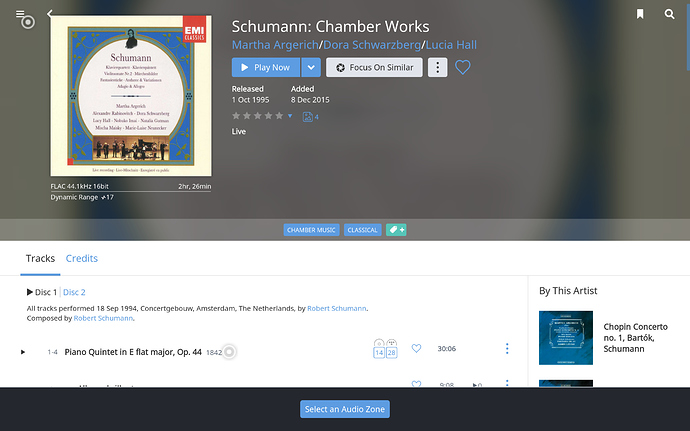 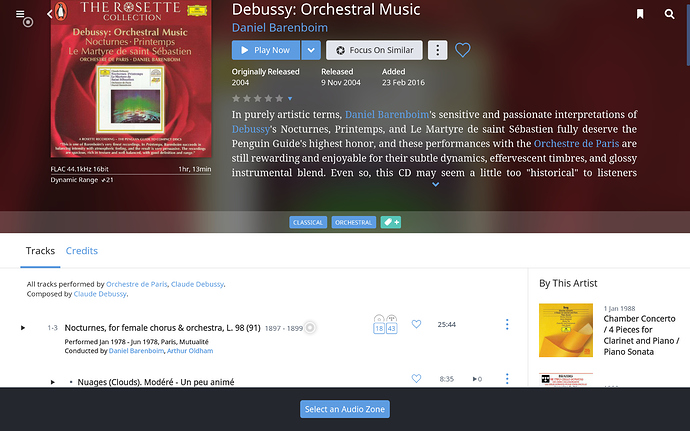 Let us know if you need helping improving your album identification skills.

Thanks Ludwig,
I would be extremely grateful for some tips on how to find a particular album. I find the search possibilities in the identify album dialogue extremele limited and frustrating. Take the Argerich Album you pointed out to me. How on earth can I find out what exactly to search for. “Argerich Schumann” will NOT find the album, “Argerich Schumann Chamber Works” will.
The same is true for the Barenboim one. “Barenboim Debussy” will NOT find the album, “Barenboim Debussy orchestral music” will.
Searching for the Artist and Composer only has worked best for me, but these two are simply too hard to find…
So some tips would be most welcome, Thanks a lot.

I have now re-ripped the Argerich one to see if it identified. Interestingly enough it is not identified as the one Ludwig indicated, but as this one: 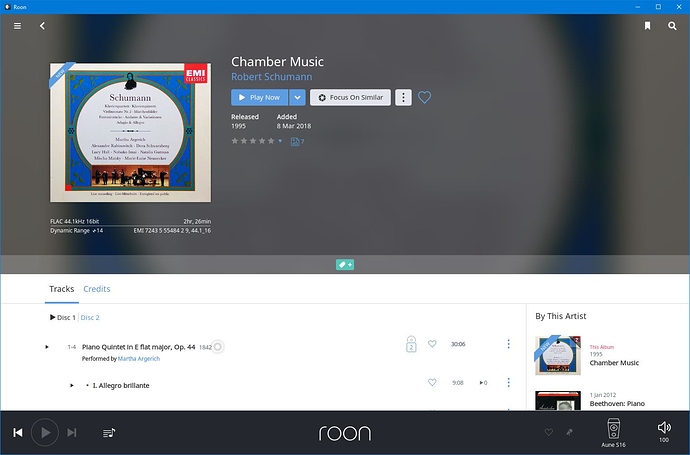 Could it be that when reripping you now have the albumartist set to composer and that is pushing Roon towards the release above rather, whereas the other release has the albumartist set to the main performers and so better matched what you originally had. Although even then only some of the performers are listed, since there are quite a few it may be better considered as a Various Artist release.

Since there is a separate composer field (and the composer is usually part of the album title) it makes sense for Classical albums that the albumartist should be set to the main people involved in creating the actual recording (conductor/orchestra/performers) rather than the (often long dead) composer, but many ripping/tagging tools don’t do this

Thanks, Paul
I tag my albums with the following tags:

In the meantime I have reripped the Argerich Album, removed all the tags (except disc and track number) as suggested in another thread and lo and behold, Roon correctly identified it. I am now reripping all the albums Roon cannot find and making sure the metadata is correct. Now Roon finds almost all of them.
I will make a (much smaller) list of the ones that remain.

Right, but what do you actually set the Album Artist to for Classical albums ?

The album artist is the principal artist, in this case Martha Argerich.
Interestingly, with no tags, the album is identified as the “Schumann: Chamber Works” one, which I would regard as the main entry.

With the tags set to

it is identified as the “Chamber Music” one

Also, the contents of the Album Artist, Artist, and Soloist tags are sort names, not names. This isn’t helpful to Roon which does make use of these tags when identifying content.

There are tags which are reserved for this type of sorting: ALBUMARTISTSORT, ARTISTSORT, COMPOSERSORT, etc.

That’s a useful observation - and qualifies as a snippet of best practice, IMO. It would be good to see this info worked into the KB article on File Tag best practice…

In order to do that, I would need to know beforehand what the Album title is that Roon expects to see. Setting it after the fact is easy of course.

Also, the contents of the Album Artist, Artist, and Soloist tags are sort names, not names. This isn’t helpful to Roon which does make use of these tags when identifying content.

I am in Europe, where names are usually sorted by last name, so this would be the “normal” way of naming an artist / composer / soloist. Does this mean, I would need to change all people’s names to “firstname lastname”?
Interestingly, Roon does add the “firstname lastname” artist form to some albums, even to some that it did not manage to identify.

In general it seems to me that the identification algorithm is very powerful, maybe it just needs some tweaking of the way it weighs certain factors. It seems to stumble often on track durations that are a few seconds different than in the Roon database.

In order to do that, I would need to know beforehand what the Album title is that Roon expects to see. Setting it after the fact is easy of course.

But clearly (EMI 7243 5 55484 2 9) (44.1_16) is not part of the album name. If you are naming all your albums like this you should probably change it to stop adding the CatalogNo and Sample rate. Although I don’t know if Roon does something to ignore info in brackets.

I am in Europe, where names are usually sorted by last name, so this would be the “normal” way of naming an artist / composer / soloist. Does this mean, I would need to change all people’s names to “firstname lastname”?

I’m in UK which is also in Europe (despite rumours to to the contrary). Yes it usual for names to be sorted by last name, but not displayed by lastname. That is why there are separate fields for ARTIST & ARTISTSORT, the first is the display name and the second is the sortname

Another reason for separate fields is you want to display a person in their native script, but sort according to your script
e.g

I wrote an article on name sorting that may be useful to you http://blog.jthink.net/2017/03/minimserver-with-songkongpart-2sorting.html

Thanks, Paul
that makes a lot of sense.
I don’t think the samplerate in brackets has ever been a problem. Roon seems to extract everything in brackets and display it below the album cover. For me it is a convenient way to include information that helps me keep apart the different versions of an album (e.g. 1979 Remaster etc.). Sometimes for Japanese issues, I add the catalog number, as there are tons of issues for any album over there.
I have never bothered with the artist etc. sort tags, but I guess that could be done with scripts in jRiver. I mainly use jRiver for tagging, as it has a great type ahead feature suggesting i.e. artist names I have used before.
I am quite close to having re-ripped my classical CDs. So far, Roon has correctly identified 99% of the newly ripped and tagged ones, so I guess I am very happy.
When I am through I will think about doing some further refinements as per your suggestions. Your blog looks like a great resource! Looks like it could keep me busy for quite a while. Thanks a lot

Glad you are making progress!

There is a CATALOGNUMBER tag which Roon reads. I use it from time to time, for much the same reasons as you. (I’ve always wondered why that isn’t used for identifying albums. Could be a magic bullet…) RELEASECOUNTRY is also available, and is displayed but not searchable, I think.

Point taken about sample rate, but I never much liked that “version” display in Roon because it’s not focus-able or search-able. In any case, Roon displays the sample rate right next to it, no? And that is focus-able.

Hi Ludwig
The samplerate information in the album name as well as some other comments in brackets help me keep different versions of the same album apart (i.e. “2010 Remaster”). As one never knows how playback and UI technology changes, I try to make my metadata portable between different UIs like Roon, jRiver, my phone, my car etc.
So far I have not seen Roon balk at the information in the brackets, so I guess it should be ok to leave it there.