I don’t remember specific version numbers but this recent behavior started either with the latest build or one before that. Could the optimization for faster search results affect the memory consumption?

The crazy RAM peaks were the old core versions. When too much memory got lost the performance went down to a state were Roon wouldn’t respond any longer. The flat line represents the newer (9xx) versions. Perfect behavior.

This is where I’m at currently. Roon was restarted last night and has been around 4,8-5,2GB of RAM usage for the evening. Normal usage is around 2GB, which is totally fine. 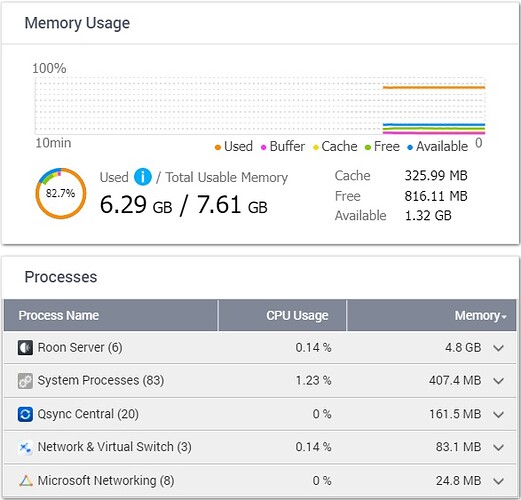 There you can also see CPU usage for Celeron J4125 with music playing and DSP running a convolution filter for 24/96 FLAC file. Not even 1% and this CPU is officially not supported for Roon.

A status update would be really needed on this @kevin @support

Do you have a memory compression setting into your QNAP? Disable it if you can. How big is your music library?

This morning, with nothing playing on any zone, my RAM usage spontaneously increased by a gig in the space of a half-hiour. DS 918+ with 8GB of RAM.

I haven’t heard of this setting? Where can I find it from?

EDIT: I think that the memory compression setting is only available for Synology(?)

I think memory compression is only available on Synology. My library is about 600 albums and Roon memory size floats around 1gig of ram so think yours is pretty normal! Now, if you have SSD cache slots, do yourself a favour, go and fill them. it reduces quite a lot CPU I/O wait

Yeah today RAM usage has been around 2,6GB which is fine and normal. I’m planning on adding the extension card for SSD cache at some point. Roon works perfectly fine and quickly even without it though, always when things work as they should.

I’m planning on adding the extension card for SSD cache at some point.

I don’t want to talk you out of this - as it’s a gadget. I just would not encourage you to expect Roon performance to profit noticeably from this. The database should be on a SSD anyway so the added cache would not help. I guess you are not writing audio files a lot or in a time critical manner so another no for the improvement side. Reading audio will always be sequential at a fairly low rate in NAS terms. No much a SSD cache could help here.

Not sure if I grasp your point here about gadgets? Anyway, that’s exactly the reason why I’ve been hesitant with the update. As I wrote earlier, Roon works very quickly as it is, even without the SSD cache. I have 256gb WD Blue SSD as system/app disk and 4TB WD Red as storage HDD. The biggest benefit of the separate SSD card would probably be when using it as a third storage drive so I could install everything there and then add another HDD storage drive to the main bay or maybe even buy 4TB SSD as Roon storage for lightning fast operation.

If you designate a SSD as ‘cache’ in a NAS you don’t have (any) much control about this device. The NAS uses it as a place to pre-store or pre-read data. Only if you add a SSD as a normal ‘disk’ you can assign it to or make it a storage group. Both ways have their advantages, there is no good or bad just the use case decides.

Yes, and most probably I would use it as storage. 4TB SSD’s are still just ridiculously expensive so I might give this update some time.

SSD Caching On A NAS? What Is It and Should You Use It?

Should you bother with SSD cache in on a NAS? Most modern generation network attached storage NAS drives include the option of utilising SSD cache, which promises to improve file access and general…

Speaking for myself, I was experiencing music stuttering and skipping when my Time Machine backup was kicking in but no more since I installed the SSD cache.

Not really what I was trying to explain. I tried to make the point that caches are particularly helpful if the technology they are realized with is superior in terms of speed (RAM > SSD > spinning disk) to that of original data. The Roon database being located on SSD is mandatory anyway as I see it. Especially databases are tricky to improve. Pre-reading often accessed files/blocks works great in cache but databases are a different animal. Adding another layer of SSD does only contribute minimal if at all. In that case RAM cache would be the way to go. If at all.

Can we go back to the memory leak?

I’m seeing 5 GB of RAM out of 8 being used by Roon Appliance on my DS918+, since the restart 7 hours ago. 3.5 hours of CPU time, with nothing playing on any of the endpoints.

8,9% average memory usage (16GB RAM) over the last month. Fairly small number of titles and streaming only. Is that what makes it worse for you guys - large number of albums?