Meridian Explorer² as MQA renderer only

As stated there, the Meridian Explorer² only supports MQA unfolding when sent a bit-perfect un-decoded MQA stream (this is due tue a firmware limitation). Therefore setting it to “Renderer” only does not fix the problem.

Now I’m wondering if this firmware limitation got sorted out or if this is still an issue with this DAC?

Would the DAC as “Renderer only” allow me to change the volume in Roon without loosing MQA?

Please update to the latest firmware, test it again and report.

I just updated a day ago to firmware v1717. This should be the newest.
Nevertheless, the update did not solve the problem.

It would appear I have full volume control of MQA playback via Tidal using an Explorer2. Can follow up with screenshots of setup and signal path if you like. Currently configured as decoder and renderer attached to a Riopee Raspberry Pi endpoint.

That is really promising. I would really appreciate if you could upload a few pictures of your setup and signal path.
Do you control the volume directly in the Tidal desktop app?

It is probably even more important to check the LED color shown by the DAC, because in case of this DAC the LED is the only thing that tells you whether the DAC interprets the signal to be MQA (or core decoded MQB) or just normal PCM. 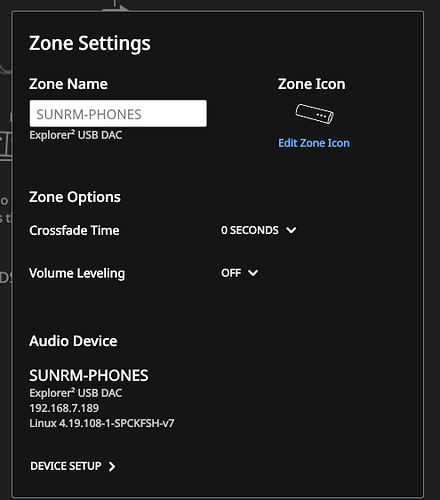 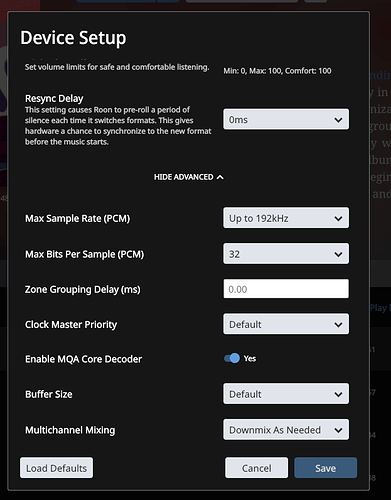 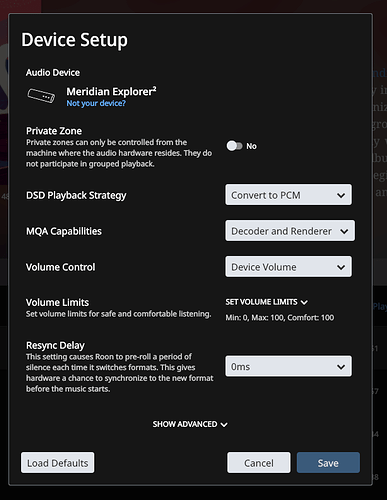 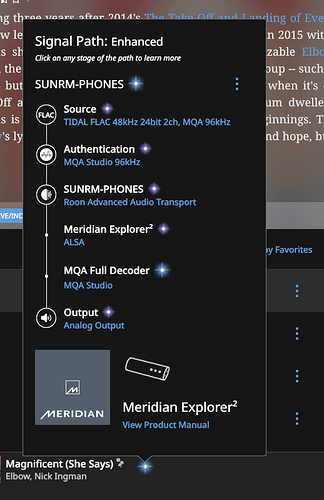 When I just played this file middle LED was white, bottom LED was blue. I think top LED was off. Can’t remember what this code really means because I never made sure that MQA coming thru was a must. Does sound good though - and that thing can power my Audeze LCD-2s pretty well. Good luck!

In my original post I missed a little detail about my setup. I use the Line-out (not the headphone output) on my Meridian Explorer². From there the signal goes into my pre-amp.

@wklie
I observed the following behaviour:

I get the blue/green light on MQA playback with maximal volume.
As soon as I turn down the volume via Roon, which applies a DSP volume, I loose MQA. Therefor I cannot get both MQA and volume control with these settings.

I don’t get the blue/green light on MQA playback. In the signal path I can see, that Roon does the first unfold but on the Explorer² only two white LEDs light up (this is due to the 96kHz decoded MQA signal coming from the Roon Core Decoder as far as I know).
For me this means, that Roon’s decoding works and the decoded MQA is correctly forwarded to the DAC but the Explorer² cannot handle the pre-decoded signal which is only left to be rendered.

@Edward_Brewer
Thanks a lot for the pictures. I see that you use your Explorer² with headphones and with that you utilize the build-in pre-amp which provides volume control. As I want to pass the signal to my main amp I’m using the Line-out.
Would it be a bad idea to use the headphone output of the Explorer² and feed this signal (which is already pre-amplified by the Explorer²) into the pre-amp of my amplifier?

For me I get volume control on the headphone outlet but not the line outlet.
Changing the volume control between Fixed volume / DSP Volume does nothing, decoder and/or render changes nothing.
Same behavior with ASIO and WASAPI driver.

Btw, I often get the Explorer locked up, i.e. it refuses to play MQA files. Do you get the same?

I don’t have any problems with the Explorer² locking up and not playing MQA files. It works flawlessly. I would only like to have volume control even though I use the Line out.

I have never noticed how changes in volume level line out v headphone out might impact MQA playback. In my setup the Explorer remains relatively hidden so I never see the lights, and I have not made an effort to be sure of pure MQA playback.

My first instinct would be to avoid stacking volume controls, so using the headphone out in your scenario would not be something I would pursue. I like MQA in most circumstances, but in this case I would sacrifice the volume control in Roon for a simpler path.

Or you could do like I did and save the Explorer for a headphone only zone where it’s small size, volume control and quality can be put to better use.

I checked the specs after reading another old posting on a Meridian forum.
The Line Out is fixed volume. There’s no way to ever change the volume on that output.
The headphone outlet is variable.

This is from the Meridian spec sheet:

@Edward_Brewer
Yes, I understand that stacking volume controls would not be ideal. But using the Explorer² for a second zone is not feasible at the moment.

@Magnus_Back
I know that the line out has fixed volume. My hope was that using the Explorer² as Renderer only the volume change could be done in software by the Roon core.
As far as I know this is possible (even without loosing MQA) but not with the Explorer² (because it refuses to only render an already decoded MQA stream).